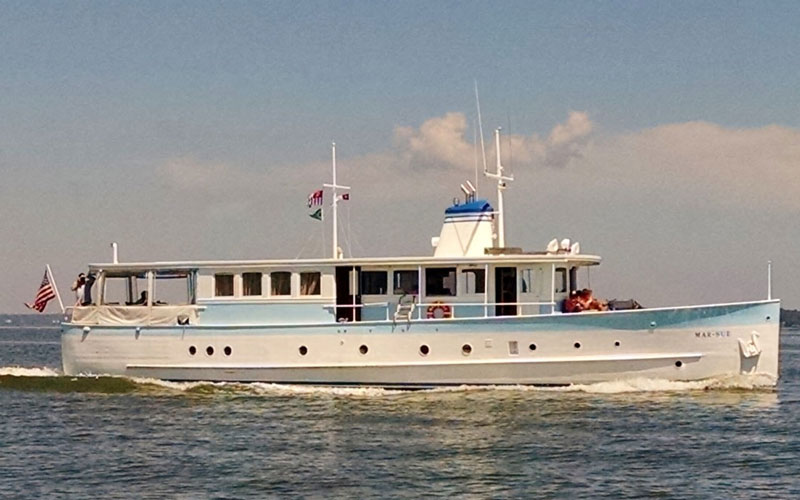 The MAR-SUE was built for Charles W. Cushman as the SEE W. SEE in 1915 at the yards of Willard F. Downs located in Bay Shore, NY.

History of the Mar-Sue is being shared by Butch and Debbie Baxter.

She looked nothing like you see her now in this photograph.  She had a canoe stern with a low freeboard of the Bridge Deck Cruiser design of the early 1900’s.

In 1917 private yachts were called to duty for WWI.  The SEE W. SEE became the USS SEE W. SEE SP-740 and was based at the USNRF Section Base 5 located in West Sayville, NY.   On the morning of 19 July 1918 at 11:23 a load explosion was heard out at sea off Fire Island, NY, radio communications were not that good at the base.  The Commander immediately dispatched the USS SEE W. SEE and two of her fleet mates to sea to investigate.   They found the USS SAN DIEGO AC-6 sunk by either a torpedo or mine.  By the time they arrived most of the crew had been rescued, but six men were missing.  The Section Base 5 vessels remained on the scene in a search and rescue effort and did rescue a downed pilot.  The USS SEE W. SEE also pulled live mines from the shipping lanes into New York Harbor to a beach to be disarmed.

In 1919 she was refurbished back into a motor yacht and in 1928 as the ROASILE IV she was rebuilt into a Cruising Houseboat style that was made so popular by Mathis Boat Building.  This style was carried out in 1976 with some modifications were made, one being rebuilding the rotted canoe stern into a round stern and raising the aft deck.

The MAR-SUE will be 103 years old in April 2018, her hailing port is Chesapeake, Virginia.

She is 67’ in length and part of the Tidewater Chapter of ACBS.  Photo was taken on the James River in Virginia in May of 2016 by Mary South.

Thank you, Butch Baxter, for preserving and sharing Mar-Sue’s history.

ALL VIEWERS:  share pictures and the story about your favorite boat.  Every boat has a story.  Be part of the growing awareness and appreciation of vintage boats and boating.