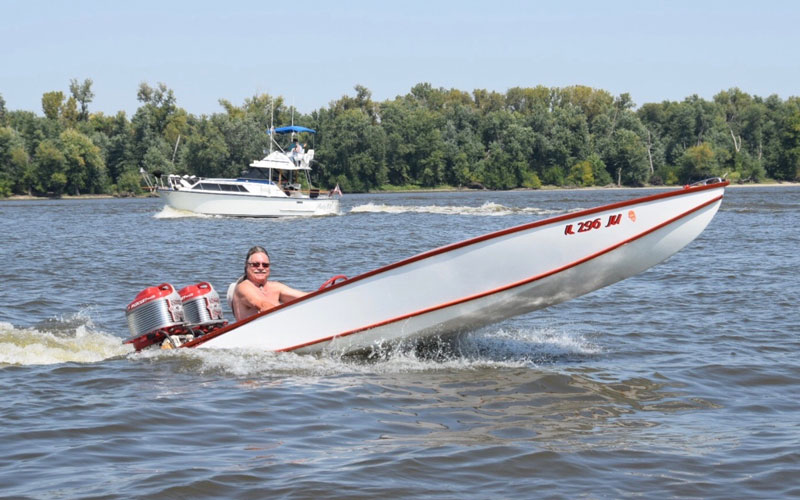 Report and pictures submitted by Rob Ebbing, member of the Mississippi Valley Chapter of ACBS.

The headline picture today is a 1954 Raveau playing around cruisers that were heading upstream to Quincy, just north of Hannibal MO.  Raveau, driven by Dan Ebbing, is owned by Todd Young and Rob Ebbing.  The 1968 Hatteras in the background is owned and operated by John Bloch who travelled from St. Louis.

The 17th Annual Quincy Classic Boat & Outboard Show in September was a huge success this year with 65 boats participating!

Six classic cruisers made the 100+ mile trip up the Mississippi River from the St. Louis area to Quincy, IL. The cruisers travelled two long days to make the trip leaving St. Louis area early on Thursday 9/14/17.

These were the six classic boats that made the two day trip:

Fourteen classic inboard and outboard runabout models launched in Hannibal, MO Friday afternoon 9/15/17 around 1 pm to meet the St. Louis cruisers and make the last 17 mile run on up the Mississippi  River together with one lockage at Lock & Dam #21 just south of Quincy to officially open the show for the weekend!

Friday night a group of former race boat drivers and mechanics talked to show participants about their days of racing for Quincy Marine back in the 1950’s and 1960’s.  Quincy Marine was known world wide for their dominance in the racing world using Mercury outboards and designing and building enhancement parts for the engines.

Saturday was show day and demonstration of boats/motors capabilities in the Quincy Bay. 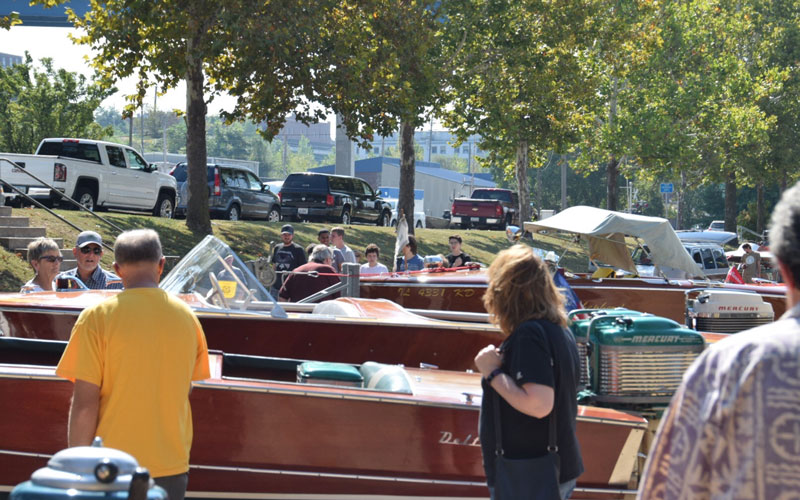 Mississippi Chapter staged it and the crowds came to see the show. (These boats are launched for the owners during show hours with a tractor courtesy of Dave Taylor, owner of Selby Implement Dealer)

Late afternoon Saturday around 4 pm all the boats were encouraged to travel up the Mississippi River three miles to a private “Island Club” for drinks and appetizers.

at the dock of the “Island Club”

Boats headed back to Quincy after an enjoyable cruise for a nice supper served at the Quincy Boat Club.

Sunday morning brought some scattered showers, but the rain couldn’t dampen the spirits from a great weekend of sunshine and classic boating!

Share pictures and a story about a boat show or boating event on this ACBS website. Email to [email protected]