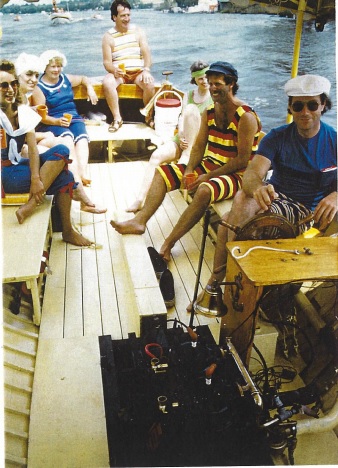 by Ron Cuccaro member of the Adirondack and Finger Lakes chapters

Built in 1903 in Peterborough, Ontario, Canada, the 28’ open launch was originally used to ferry vacationers to their remote cottages in the islands of Toronto area in the early 1900’s. The actual name of the manufacturer is unknown, but it is very possible that it was built by the same company who built the original engine; Schofield Holden Machine Co. Limited of Toronto Canada, who also sold. Schofield -Holden Power Boats.

The 8’ beam hull is cedar stripped over white oak framing and ribs. Early pictures depict her with a canopy top and without an engine box.
In 1998 the previous owner Chuck Maziasz of Cheboygan, Michigan. found the launch in Toronto, in the back of a barn covered in dust and in bad shape. Deciding that she would be a perfect fit for Long Lake in Michigan, she underwent two years of painstaking restoration by Ken Lavalette of Woodwind Yachts in Nestleton, ON., leaving as much original as possible. The seating was changed to be more accommodating for passengers and the steering system was moved from the port side to the center and mounted to a custom-built engine box.

She was re-launched on Long Lake in the summer of 2000, with the name’ Long Lake Lady. The original Schofield-Holden engine was replaced in 2007 with an Atomic 4cyl. 113hp engine, by Torresen Marine Inc. of Muskegon, MI. Through the years she has been in several boat shows in Northern Michigan and won Best of Show and Boat Owners Choice awards in 2016.
We purchased the boat in April 2019, after searching for a boat built during the decade from 1910 to 1919. We have restored and still own boats built in the 20s, 30s, 40s and 50s and decided that there had to be a goal in mind. Now that they have the 1903 in the boathouse, we just need to find the right one for the teens.

After installing a new Atomic 4-cylinder engine, rewiring and making minor repairs, she was renamed “She-La-Vela” and launched one again; this time at White Lake in the Adirondacks. Ron Cuccaro said “One of the best parts is that the launch is big enough so that everyone can go for a ride at the same time. It’s like having a 1903 party barge.”