1938 water-speed record-setting Bluebird K3 is back 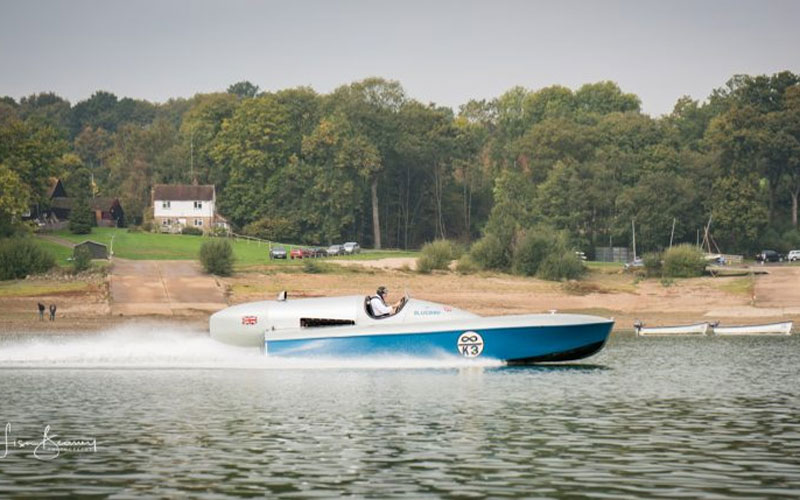 Okay, so it didn’t go at its record-setting speed of 130.91 mph that was set on August 17, 1938, but after a 20-year-long restoration by power-boat collector and speed enthusiast Karl Foulkes-Halbard, Sir Malcolm Campbell’s 80-year-old Bluebird K3 hydroplane returned to the water and managed a speed of 52 mph in a test on Bewl Water in Kent, U.K., in early September.

Sir Malcolm had already established eight land-speed records at Pendine Sands in the U.K. and Daytona Beach, Florida, but his last record of 301.337 mph in his 2,300-hp Rolls-Royce Merlin-powered Bluebird race car was set on September 3, 1935, at the Bonneville Salt Flats. This record made Sir Malcolm the first man to exceed 300 mph in two passes at the Salt Flats. He commissioned Fred Cooper, of Saunders Roe, to build a speedboat using the same Merlin engine in his attempt to break the water-speed record of 124.860 established by American Garfield “Gar” Wood on the St. Clair River in 1932 aboard his boat Miss America. Wood had upped the record five times between 1920 and 1932 in several versions of the Miss America boat.

On September 1, 1937, Sir Malcolm and the K3 established a new speed record of 126.32 mph on Lake Maggiore near the Swiss-Italian border. The next day, he topped his own record at 129.50 mph. His last speed record of 130.91 took a little longer to accomplish; it was over a year later that his Merlin-powered Bluebird K3 was clocked at 130.91 on Lake Hallwyl in Switzerland. Campbell felt that the speedboat had been stretched to its speed limit and was becoming too dangerous to push further, so it was retired from speed boat attempts that same year. The Bluebird K3 was acquired by Paul Foulkes-Halbard in the ’90s and displayed at Filching Manor with other vehicles in his collection, and Paul had plans to restore the boat to its former glory. Upon Paul’s death, son Karl took up the mantle and invested a large amount of his money and time into completely rebuilding the engine, gearbox, clutch, and especially the hull, which had to be stripped down to bare crossmembers and reassembled to 1938 dimensions using newer composite materials. After a 20-year restoration, the 80-year-old Bluebird K3 heads out on Bewl Water for a test run.

The U.K. newspaper The Telegraph quoted Mr. Foulkes-Halbard after putting the Bluebird through its test paces:

It’s a pretty wild experience, even at just over 50 mph. I can only take my hat off to Sir Malcolm Campbell, who was doing more than double those speeds. He was an exceptionally courageous man and an extremely skillful pilot.”

With the successful test under his belt, Karl Foulkes-Halbard plans to return to Lake Maggiore next year to attempt to recreate the first two speed records achieved in 1937 by Sir Malcolm Campbell and possibly duplicate his last record of 130.91, set at Lake Hallwyl. Looking every bit as stately as the boat did when it set its water speed record in 1938.

Malcolm’s son Donald continued both land- and water-speed-boat record assaults in newer equipment in the following years until his horrific crash on the water in the Bluebird K7 in January 1967 in which he was killed while attempting to break the 300-mph mark in a speed boat. Donald Campbell set a land-speed record of 403.10 in July of 1964 aboard the Bluebird CN7 as well as seven water-speed records in the Bluebird K7 from 202.32 mph to 276.33 mph between 1952 and 1964. After the crash in 1967, divers found Donald’s helmet but were unable to locate Donald’s body until May of 2001.

The Daily Mail UK has this interesting story that is well worth reading regarding the locating, retrieval, and restoration of the ill-fated Bluebird K7 from Coniston Water in Lancashire, U.K.

Our thanks to Phill and Lisa Beany for use of their photo archives.

And thank you to Carla Gernhofer from Hagerty Classic Boat Insurance for drawing our attention to this interesting restoration article.

Return to the Home Page of this ACBS website