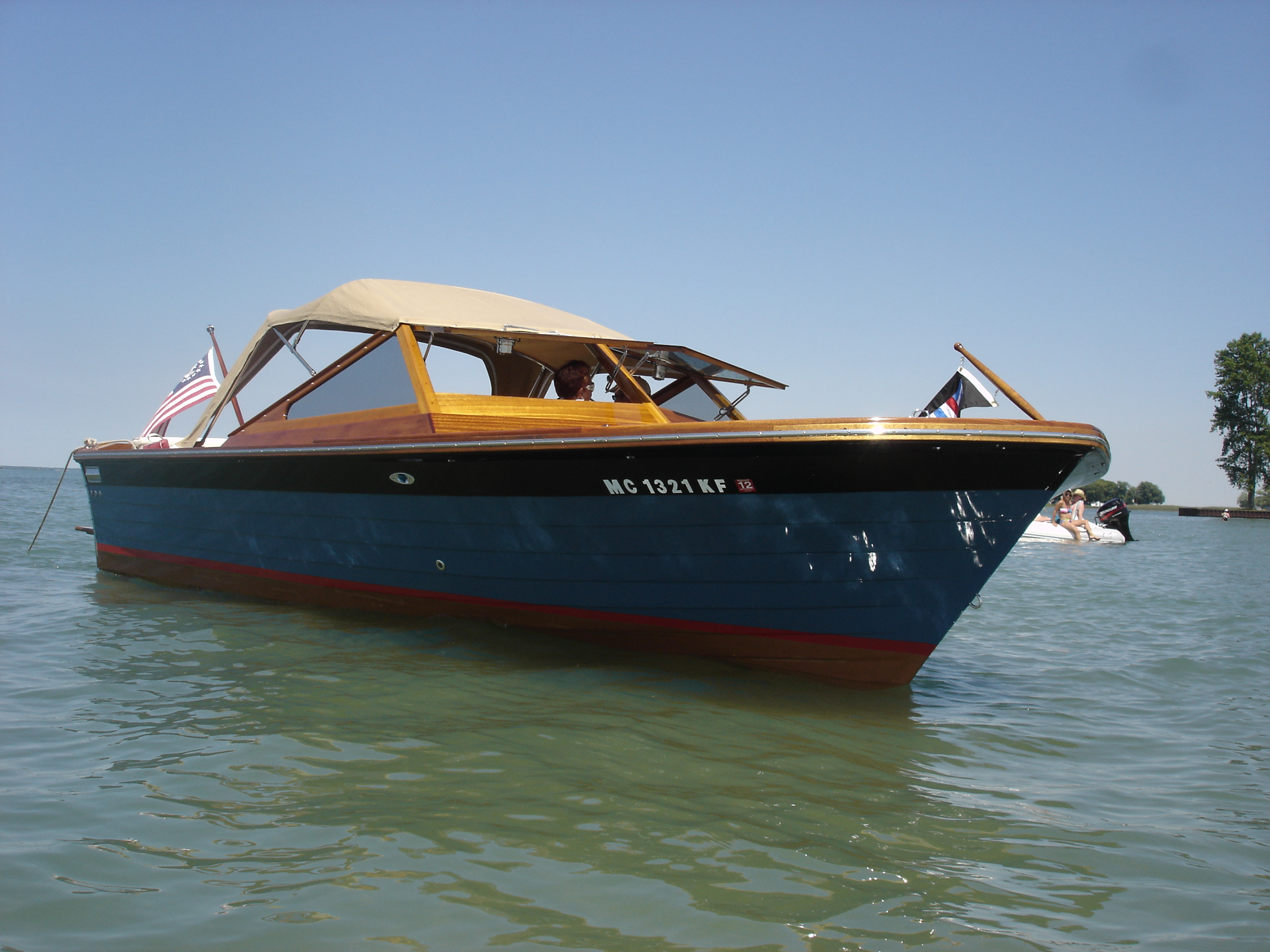 By James Sanders, member of the Michigan chapter.

I purchased this boat in 2003 after riding in a similar boat in some very rough water. At that time I owned a 31’ Chris Craft Commander and a few wood Chris’s prior to that.

The first summer we used the boat primarily in the Algonac area as well as Lake St. Clair. I knew that I wanted to alter the boat somewhat but not to the extent of what is now the finished product. I believe the end result to be the ideal day boat for my family, friends and myself.

The highlight of the summer of 2004 was a trip on the Michigan’s inland waterway, which we did with the local ACBS chapter. A ton of fun, but the boat looked out of place surrounded by the large group of show quality woodies we traveled with.

In 2005 we participated in another local ACBS organized trip to Torch, Skegemog and Elk Lakes. What a blast! Thank you Mike Riharb (past Michigan ACBS Commodore) for setting up these events.

The first project was a simple one. The old generic swim platform needed to be replaced. I built a new one that was slightly larger and also fit the arc on the transom. It supports a store bought swim ladder if needed. 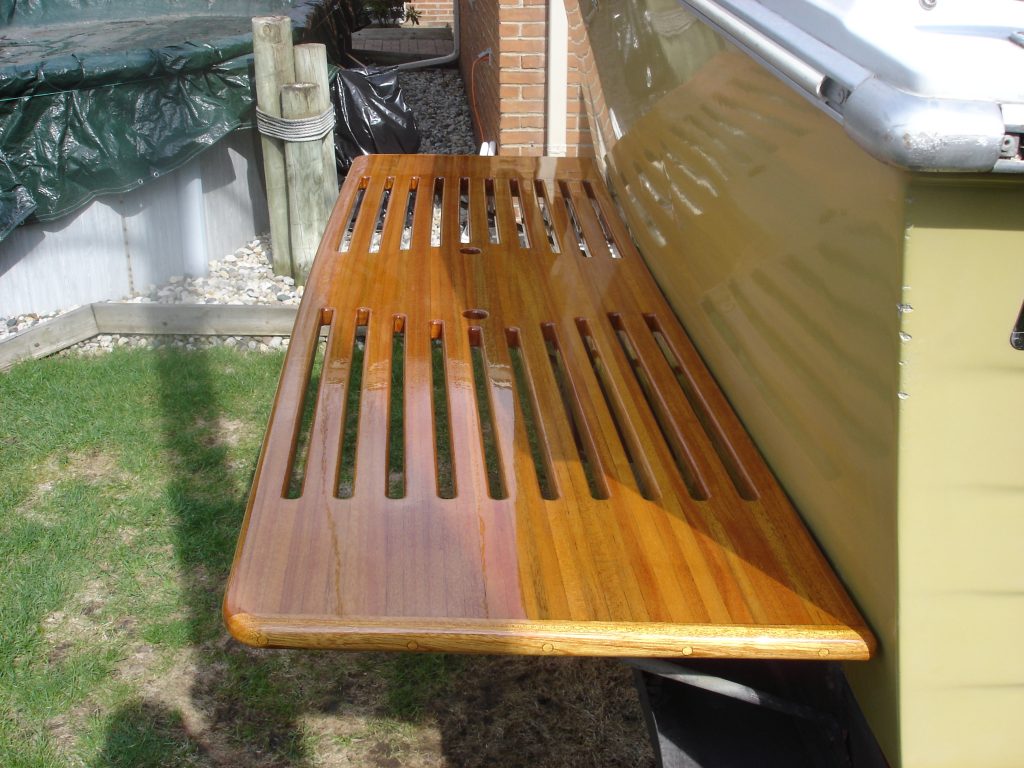 I knew I wanted a ventilating windshield and couldn’t really figure out a way to modify the stock one. The frame was aluminum and not substantial enough to support hinged windows. Why not build a new one and add a little style in the process? Easier said than done. There is a ton of math In that thing and I did not do well in high school geometry. Eventually though the windshield was sorted out and built in mahogany. I also fabricated and installed a mahogany cap for the bulkhead. The customization process is now underway. 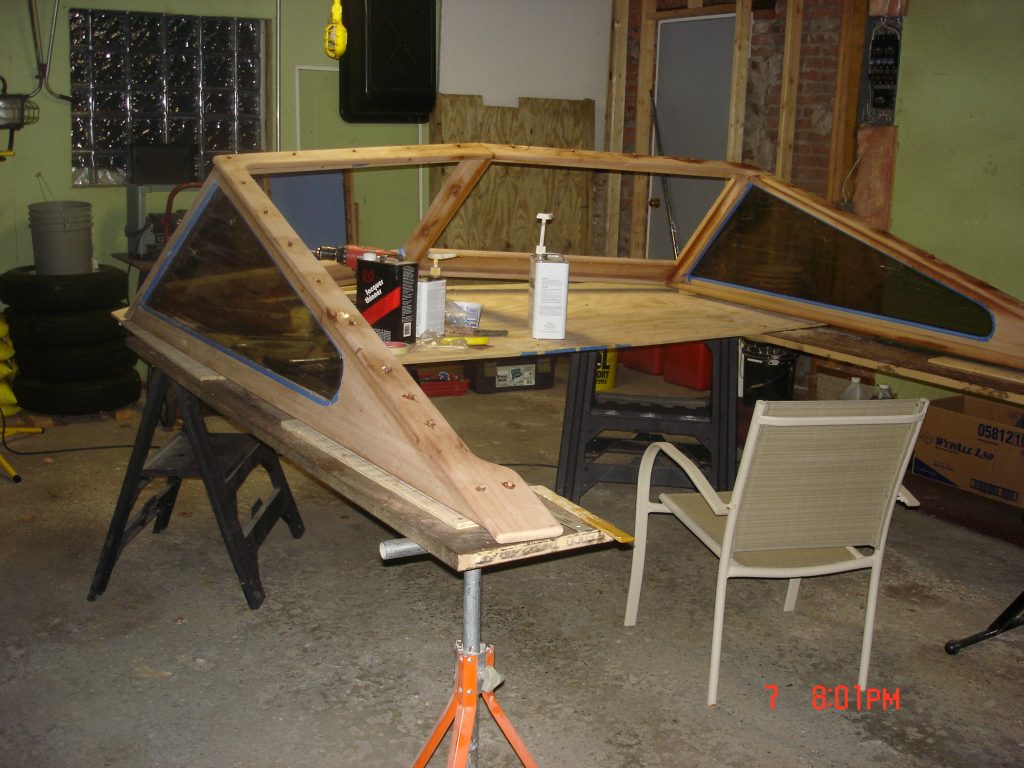 If these boats have any faults it’s the way they handle around the dock. The addition of a bow thruster helped solve that issue. This project turned out to be fairly simple and I am happy with the result.

Another area of concern was I felt the exhaust through hulls were too low. I elevated them about four inches, replaced all the exhaust hose and installed a pair of Vernatone mufflers. The end result is a subdued exhaust note and no more gurgling at idle. I also added a second bilge pump at the transom at this time. An unintended consequence to all this was the existing fuel tank would now not fit in the space where it used to be. A new low profile fuel tank from Todd solved that problem.

After reinstalling and reinforcing the rear deck, I skinned the transom and laid solid mahogany decking. All the woodwork throughout the project was sealed with Smiths epoxy and a minimum of ten coats of Epifanes.

The front deck was next on the list. I carefully removed the old teak toe rails to serve as pattern material. I then removed what I thought was an odd reverse radius around the perimeter of the deck. I also cut out the old hatch opening and raised center section. Two additional deck beams were added and the cut outs were filled with marine plywood and fiberglass. The deck was then laid with solid mahogany and a new book matched king plank. That’s where work stopped for the season. 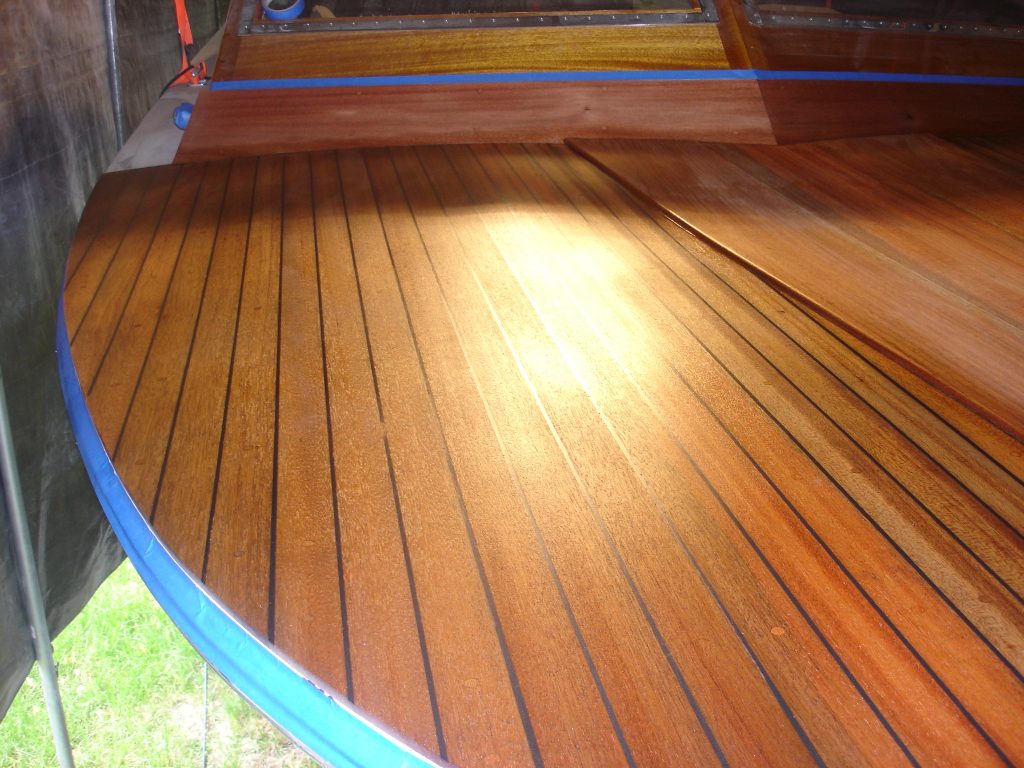 Woodwork continued the following winter with the removal of the raised portion of the side decks, reinforcement and solid mahogany decking. This helped to clean up the appearance and also provides a nice wide place to step when boarding. The old teak toe rails were used as patterns for the inboard edge of the new, more substantial mahogany rails. A new mahogany and stainless rub rail replaced the old worn out aluminum and rubber rail. The exterior of the boat now has a cohesive finished look.

On a gorgeous Sunday morning my wife and I were enjoying a beautiful ride up the St. Clair River. The motor chose that time to suck a valve, explode a piston and wreak havoc inside. Two weeks later, my friend Brian, had a beautiful new small block Chevy installed with all the externals rebuilt. Thanks Brian.

The bottom got some attention next. Thirty plus years of antifouling paint was stripped by my buddy Steve. Interlux epoxy barrier coat and Pettit hard copper bronze were applied. He also took the time to level the water line. The old line followed the planks exposing more bottom paint at the bow. I feel that straightening out the boot stripe gives the boat an enhanced, lower profile appearance.

A little work on the interior came next. I removed the old vinyl crash pad and installed a mahogany coaming. The old helm station was looking tired. I reconfigured the instrument panel and skinned it with mahogany. New instruments and switches were installed with everything being completely rewired. I also replaced the old console for the trim tabs, bow thruster and the all important drink holder. The teak on the wheel was refinished and the hardware was re chromed along with the throttle and shift levers. 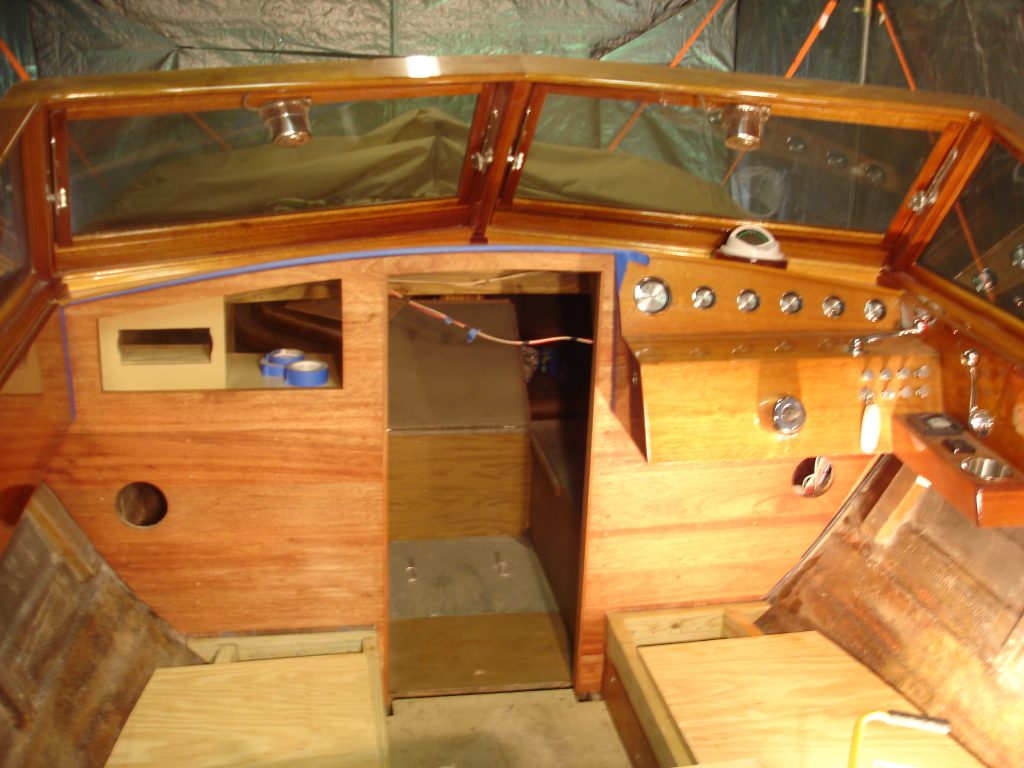 The cuddy cabin bulkhead came next. I stripped the 1973 Formica and widened and raised the companionway opening. I cut a hole for a glove box, which would serve to hide the stereo and a few small items. The bulkhead was then skinned with mahogany planks.

At this time I chose to elevate the cockpit sole in the forward portion of the deck. This made the deck flush front to back with the exception of the foot well between the helm chairs. This allowed me to eliminate the foot rests giving the bulkhead a cleaner more tidy appearance. New doors for the glove box and companionway were then fabricated and installed.

Throughout this process my goal was to pay very close attention to every detail. With that in mind I fabricated wedges for the bow and stern pole mounts. They were cut to forty-two degrees, which matches the rake on the front of the windshield. When you look at the boat in profile, the verticals line up nicely.

The original gel coat was in decent condition and could have been repaired, buffed out and made to look like new. I felt like it was time for a change though, so after a lot of grinding and fairing I applied Interlux epoxy barrier coat all the way up to the rub rail. It’s a nice high build primer and sands nicely. Color came next, Epifanes yacht enamel. It’s low tech, covers well and flows beautifully. Except for the interior the boat bears no resemblance to her old self.

Putting soft goods in the cockpit comes next. This was a challenging and very rewarding project. The comfort and class level got bumped way up. I gutted the interior completely. The helm chairs were not original and had been replaced at some point. The remaining upholstery was original and very serviceable but tired. The motor box was removed and reconfigured to delete the five cup holders on the back of it. I closed in the top so that it could be covered as a unit without a separate cushion on top. The back seat frame was in poor condition. It was badly wracked with lots of loose fasteners. I should have burned it. Instead I squared it up, refastened it, stiffened it with some additional bracing and replaced the seat base and back. I then sliced the base and backrest into six separate pieces. Each one can be removed without disturbing the others. New helm chairs were needed and I could not find what I wanted commercially. Solution, build them myself. This turned out to be a ton of trial and error but I’m happy with the result. New ceilings were fabricated to replace the old vinyl and corkboard. Vast improvement. The teak trim boards below the ceilings are original to the boat. They were badly weathered but one pass through the thickness planer made them look like new. The cockpit floorboards came out, got cleaned up and repainted. I also cut some holes for hatches and placed tubs under the hatches for some added storage. As parts returned from the upholstery shop, new infinity luxury vinyl was installed on the cockpit sole. The cockpit was reassembled; the last two puzzle pieces were the helm chairs resting on new pedestals. They are functional and very comfortable. 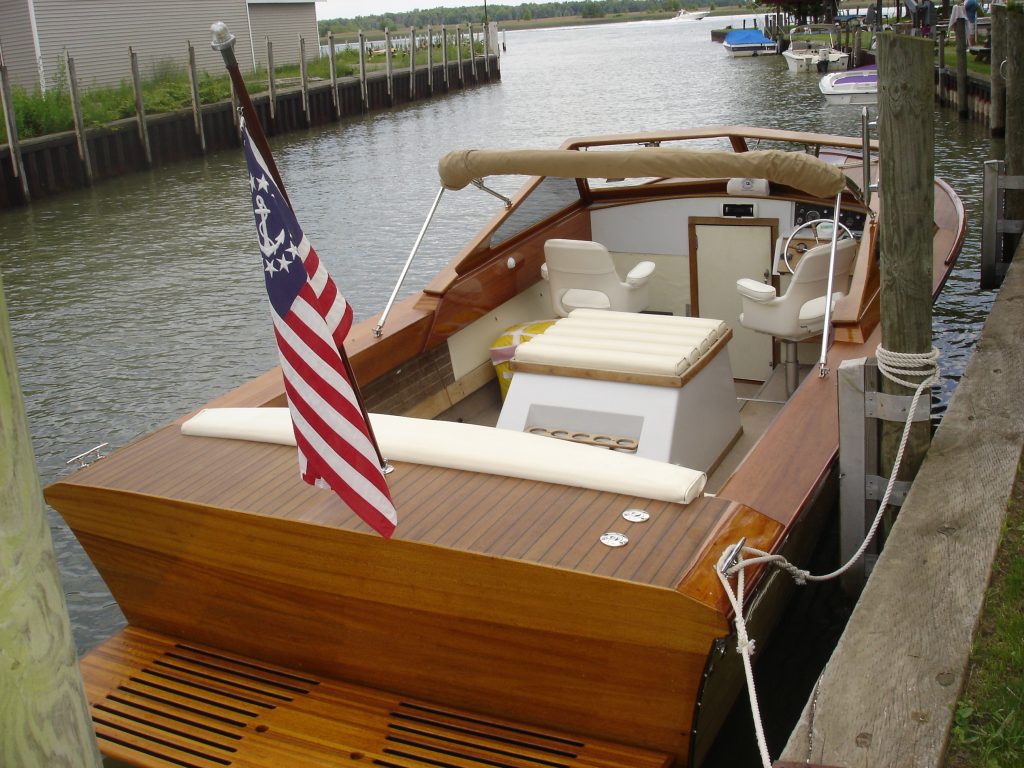 I am pleased with the end result of the project. It was far larger in scope than I expected but well worth the effort. I wanted something custom but looked original. I feel like that goal has been achieved.

My wife Rose and I have been Michigan chapter ABCBS members for more than 30 years. We have participated in multiple shows, antique boat parades and various other events over the years and have enjoyed them all. We have also forged friendships with other members that transcend boating, It really is a great community and we are happy to be a part of it.

The photos are just a few of probably hundreds taken over the years. The first one shows the boat in it’s before state with my beautiful wife and daughter on the front deck. In the last photo they are more camera shy.

I have some people to thank and I hope their names appear in this article.