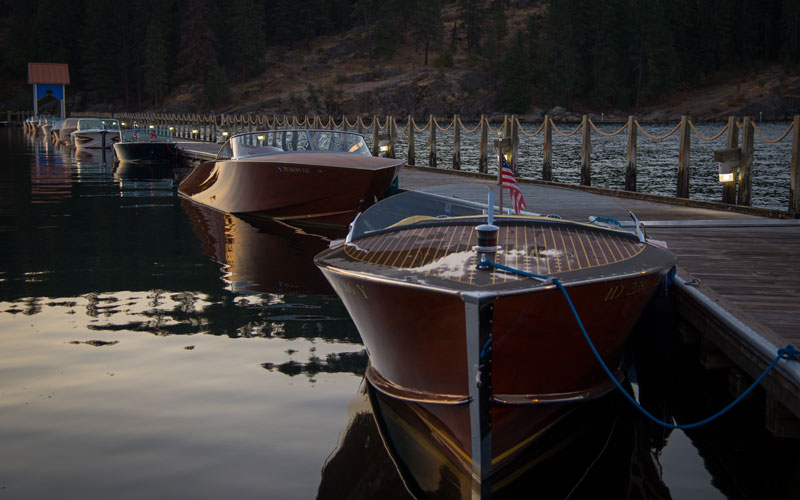 Report by Don Vogt and photography by Wes Yandt, members of the Inland Empire Chapter of ACBS. 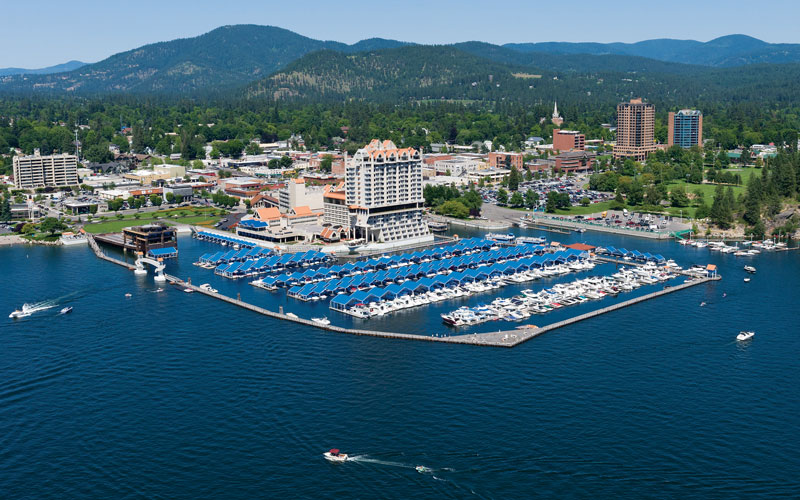 The show was sponsored by the Inland Empire Chapter of the Antique and Classic Boat Society. The combination of perfect summer weather–upper 80’s to low 90’s, with low humidity and mild breezes, clear blue skies and forested mountains framing the scene on Lake Coeur d’Alene, and an impressive display of well-shined boats of various types and ages, made for another great boat show. This event, held at the resort annually for more than 25 years, is one of the top west coast shows, and is immensely popular, drawing thousands of visitors from eastern Washington, northern Idaho, western  Montana, southern British Columbia and points beyond.

Although the show largely consisted of wood boats, there were boats of other materials as well, such as an example of the first fiberglass Cobalt manufactured in 1972. 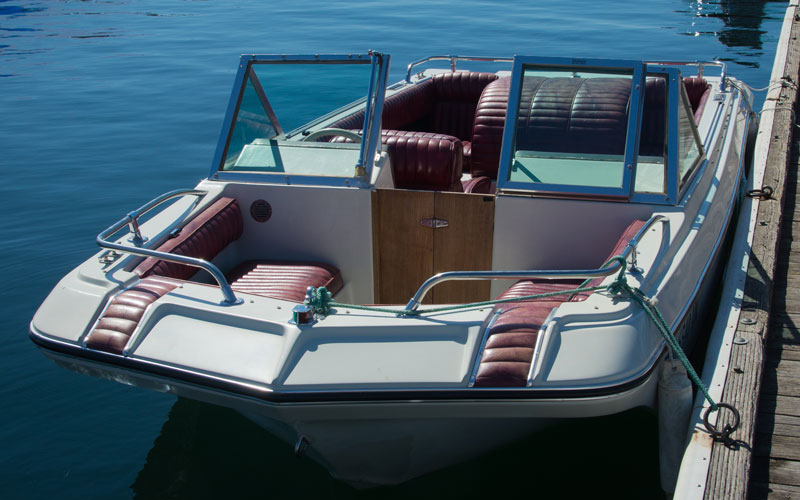 Lake Coeur d’ Alene is large enough to support a fleet of cruisers, and there were several on display in addition to the familiar runabouts and utilities.  A collection of woody station wagons was also located on the resort grounds, which added another popular feature to the show. 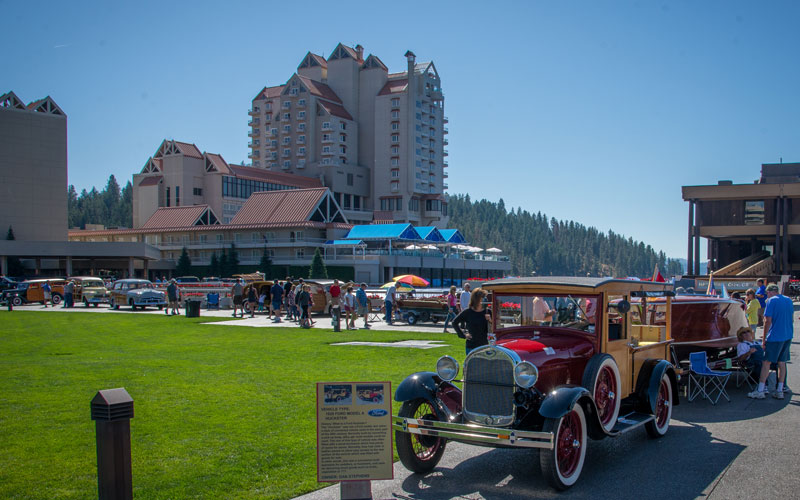 Members of the National Woodie Club brought several Woodie cars down to the resort.  One even had a wet bar in the back end of its camp trailer it was pulling. Photo by Wes Yandt 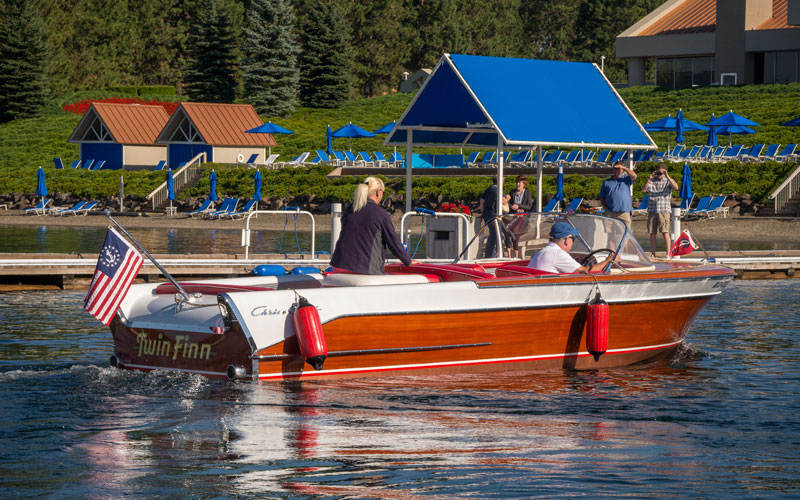 Boats ranged from professional concourse quality restorations to boats lovingly restored by their owners.  Although the show is not a judged event, awards were given for people’s choice and skipper’s choice. 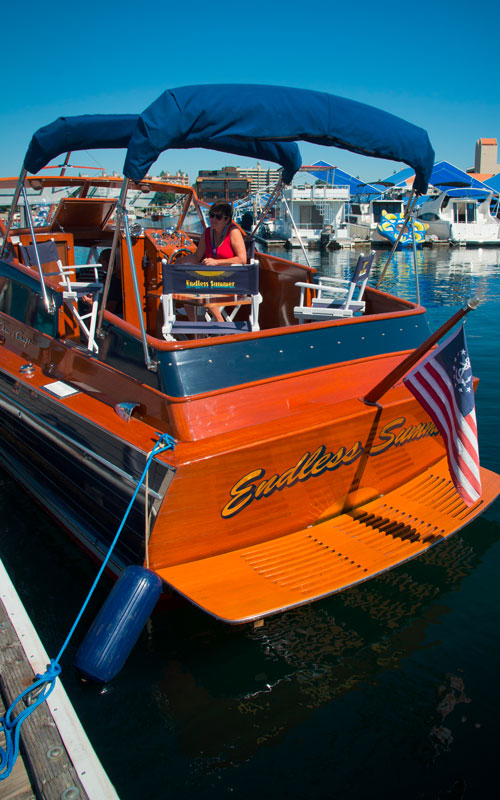 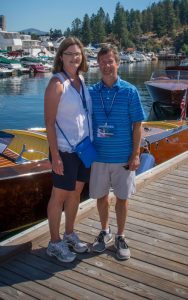 Special guests of the event were ACBS executive director Dan Gyoerkoe and his lovely wife Tracy, who were making their first trip to the area. The resort, which has hosted several ACBS national shows, has been proposed for another show in 2022.

Coeur d’Alene is also the center of modern wood boat building in the region, and both the Coeur d’ Alene Custom Wood Boats (a division of the Hagadone Marine Group), and the Stan Craft Boat company, displayed some of their most recently made custom launches and runabouts.

More pictures from the show weekend:

Stephen Parmentier in his family’s 1946 25’ Sportsman Sedan.  She has a 225 hp Scripps model 208 for power.  Stephen’s grandparents bought this beautiful boat new and it has been on Couer D’Alene Lake its entire life.  Photo by Wes Yandt

Richard and Marilla Brooke’s 1960 21’ Century Coronado “Jannette” stretching her legs in front of the resort.  This boat was purchased new by Richard’s parents in 1960 and named after his mother.  Photo by Wes Yandt

Woodies in front of the Coeur d’Alene Resort Golf Course’s signature hole, the world’s first floating, movable green. The green weighs in at 5 million pounds, and is moved every day with a series of cables attached to the lake bottom. Moving the green allows the length of the hole to vary between 75 and 175 yards.  Photo by Wes Yandt

Thank you, Wes Yandt and Don Vogt for this colorful report on this year’s Inland Empire Couer d’ Alene Show.