The Boat Behind the Cabin 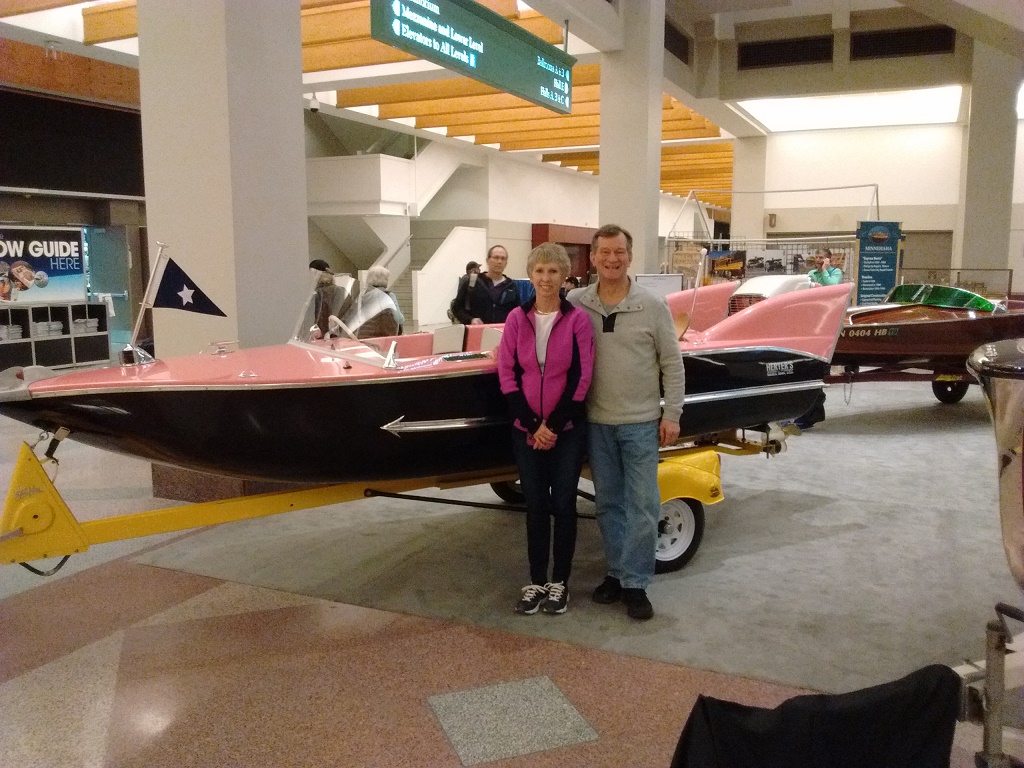 By Don Knauff member of the BSLOL chapter

I was looking on the internet for some information about my 1955 Chrysler Imperial and I saw a photo of a 1955 Desoto pulling a boat with large fins that really intrigued me. I knew I absolutely had to have a boat like it to pull with the Imperial, so the search was on.

Everyone that embraces the vintage boating hobby has to have an enabler. You can start to get involved on your own, but the enabler hastens the downhill slide enormously, the go to person for model desirability, prices, and usually the most valuable info of all, knowing where the vintage boats are hidden.

I met my enabler at a vintage fiberglass boat show in Rockton IL. I was there to look at a Dorsett that was for sale. Del suggested I look for a 1957 Herters. He said the 57 and 58 models with their tall fins were more sought after, and harder to find. Finally, I convinced Del that he had way too many boats, and to sell us his short fin Herters. The colors went well with the Imperial, and it was a turnkey boat in good condition. The deal was made.

That summer we showed at several local shows and then Del, me, and some friends from Illinois pulled our boats to the Clayton, NY ABM show and had a wonderful time. We continued to show and use the 59 Herters for a few years, but I was always looking for a tall fin.

It finally happened in a place and manner I would’ve never expected.

We had just finished eating when a couple stopped and asked us if the pink and white boat belonged to one of us. She said she had one just like it that has been lying up against a tree behind her family’s cabin for at least twenty five years.

At that point her husband commented that he thought that the boat was different, that the fins seemed taller. That’s all it took. We exchanged information and emails and they assured us they would send e-mail photos to us. When the photos arrived there was no more speculation, it was definitely a 1957 Herters. Finding it was the easy part, buying it took over six months and numerous e-mails and phone calls.

At first, they didn’t want to sell it. After some discussions on the levels and cost of restoring it, they decided they really didn’t want to go down that road. I outlined my plans for the restoration and showing of the boat and told them I would place a plaque on the boat honoring her father. Five years later the boat was finally finished and was displayed at The Bob Speltz Land-O-Lakes Chapters Vintage Boat Exhibit at the Minneapolis Boat Show. And yes, there was a brass plaque mounted permanently on the dash honoring the former “Captain”.