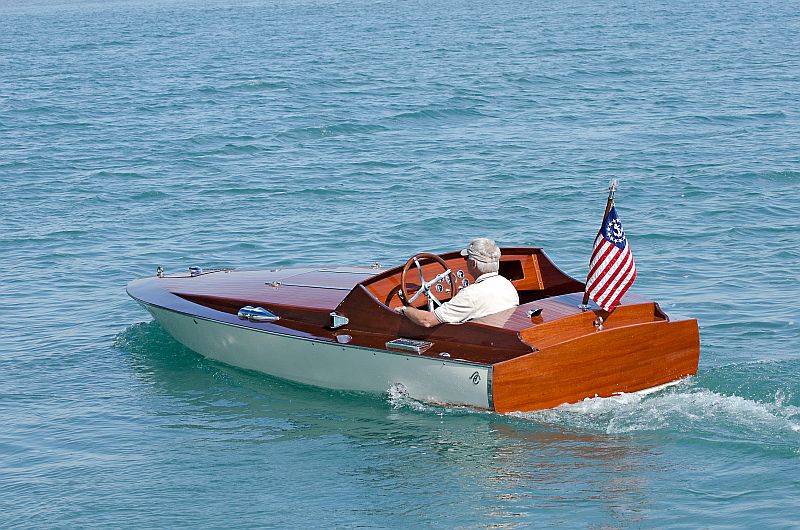 By John Adams member of the Michigan chapter

It all started in the late 1950’s when growing up on the Clinton River near Mount Clemens, Michigan. A neighbor who had several Chris-Craft Woodies would cruise to Lake St. Clair in a beautiful 18’ Capri; dressed for dinner with his wife and return after dark. I could hear them coming with that classic rumble of the 95K. This was my inspiration point to have my own classic wood boat.

During this time, the Hacker plant in Mount Clemens was no longer building Hackers. Mariner, a wood utility boat, was being produced and a few unlimited hydros. I spent as much time there as possible hanging around, watching and absorbing information.

I also worked at a marina in Harrison Township where I met Melinda, my wife of over 50 years. My main mode of transportation to work was by boat. I would acquire old wooden boats, usually with rotted decks to work on. Using a sheet of plywood and brass screws purchased at Tom’s Marine Hardware, owned by Tom Flood, I made these old boats seaworthy enough to get me on the river.

Fast forward 30 some years: The boat I had at this time was a very rare 23’ Chris-Craft Thompson wood lapstrake hull with cuddy cabin, 1962, with an Eaton IO. It was a beautiful boat but a lousy ride. My next boat was a rare find; 25’ Lancer with 10’ beam, 1968, all fiberglass, lots of deck room and cuddy with a head. If you aren’t aware, Lancers have a 23 degree dead rise and ride very level. I still own this boat, over 40 years now: three engines, two interiors and two tops. It lives in a hoist and still looks great!

I joined the ACBS in 1992 and started restoring my first Woody. It was a 1942, 17’ Chris-Craft Runabout. Five years to finish, beautiful show boat but very limited use in our rough waters. The next boat was a 1955 20’ Chris-Craft Continental Utility. It was the most beautiful utility ever made. But again, a lousy ride.

The only style I hadn’t owned was a Gentleman’s Racer. At one of our shows, Maya Boat Company had an awesome racer, “Obsession” and that’s exactly what it was and I needed one. There was a small marina near a construction project my company was building where a fiberglass boat was for sale. It turned out to be a 23’ Lancer with a 426 wedge power plant. The marina dredged the wells with this powerful motor. I thought rather than taking years to build a wood hull, why not use this hull? This was the start of my Lancer Racers.

The first thing I did was to photograph the hull and then overlay sketches were made to determine a sweet line for the new sheer. A scale drawing was developed with a 12” grid for deck framing. Measuring from the chine to the proposed sheer established a rough line to begin cutting the hull. This is approximately 10” lower on a 23’. This work was completed using a sawzall after the interior and decking were removed. The 10” strips were so flexible I could bend them in a circle without breaking. This gave me and idea. Would it be possible to cut the hull away from the transom and bend it in to make tumble home? If you’ve seen my racers, you know it worked!

Deck frames are now made with notches for battens and hull bonding. Blockings are epoxied to the hull at each frame which is then epoxied to the frames to prevent deforming the hull. 6” x 3/4” plywood is let into the frames flush with the hull; epoxied with fiberglass cloth bonding the hull to the deck framing. Finally, 1/4” plywood with 3/8” mahogany planks are epoxied to the framing. I mounted the engine considerably forward of the original location. Fir stringers are sistered to the existing fiberglass hat section stringers. Lancers have no wood in the hull stringers. The prop shaft is quite long and at a much lower angle. I used an old style shaft log and a laser for alignment. The new aluminum gas tank mounted aft, as low as possible, prevented the exhaust from being mounted through the transom. Thus, the hull forward of the tank worked. After some discussion with Chris Smith, he thought I could move the engine even further forward for better leg room. The end result was essentially a new boat with a bullet proof vintage hull and a great ride.
I’m on my fifth racer now; 17’, 19’ and (3) 23s’. The “F” and “G” are the vintage class for their size and H.P. The # is the year of the hull I used. These boats ride as nice as the look: level, dry, and with their 24 degree dead rise, make a chop or cruiser waves no problem.

G-72 was the lead boat at the International Poker Run and provided many rides at the show. I’m usually giving rides or leading cruises on our beautiful St. Clair Flats and channels at our Michigan Chapter shows. Come to our shows and take a ride with me.