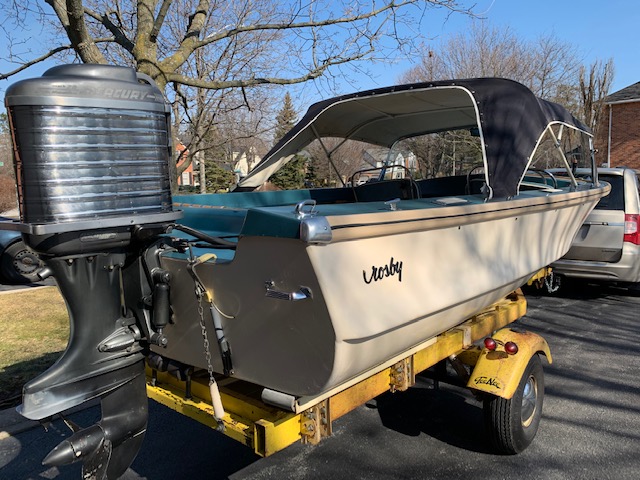 By Richard Shorney member of the Sunnyland chapter

’59 Memories is a 1959 Crosby 16’ 7” “Custom” runabout manufactured by
Aeromarine in Grabhill, Indiana. This model is called the Fish-n-Ski and its design caters to those who enjoy water skiing and open cockpit fishing. Crosby runabouts were also used for water skiing demonstrations in the 1950 ’s and 1960’s at Cyprus Gardens in Florida.

This boat has a late model production 1958 Mercury Mark 78E – 70 HP Super Marathon six cylinder outboard with triple carburetors and Super Marathon short shaft in the rare “all Charcoal” color. This model is a direct drive reversing outboard and was appropriately named the “Dock Buster”. Instead of having forward and neutral gears, the motor was reversed by momentarily stopping the engine and then re-starting the engine in the opposite rotation. The special single leaver control facilitated this procedure. Though quirky, the concept was well designed by Keikhaeffer Marine and these motors are now sought after by collectors. It is positioned on an original 1960 Tee Nee OB 1500 – A Trailer with a dual coil/shock absorber suspension system.

This boat has a very unique history. An older couple approached me at an A.C.B.S
event in the summer of 2018 and told me they still owned their late parents
one owner, all original family water ski boat. They remembered as young teenagers, the enjoyable times they spent learning to water ski on Lake Erie and the Niagara River. They commented on how fast the boat traveled and it had no problem pulling two skiers at a time.

The boat was stored in a 40’ tractor trailer unit in the summer of 1993. Needless
to say, I was somewhat skeptical hearing this story, but they were wishing to sell
the boat to a good home and wanted to know if I would be interested in viewing
the boat the following week. I had nothing to lose so my curious nature said “yes”. They showed me their parents original Crosby files which consisted of all
bills of sale and service records of the boat, motor, and trailer since day one, along with the original sales brochures that were retained.

I made an appointment to view the boat the following week and it was uncovered
in all its glory. A couple of months later, the boat was removed from the tractor
trailer and saw daylight for the first time in October 2018. Since then, the boat
has had countless hours spent cleaning, scrubbing, and polishing. The Mercury was not seized, and the original key was still in the controls. This boat was outfitted with several optional accessories including a tempered safety glass windshield, adjustable side vents, folding convertible top with side curtains, windshield spot light, portable rear water ski bench seat, polished bow, and stern flagstaff lights, single cable steering, Crosby pennant and deluxe step pads.

This unique “Fibre Glassic” boat won “Most Original” at a local antique boat show
sanctioned event last summer. ’59 Memories with her history and documentation
would make a very nice addition to someone’s Antique & Classic boat collection.
Further details regarding the fascinating history of Crosby Aeromarine can be
found in the summer & fall 2018 publications of the A.C.B.S. Rudder magazines.