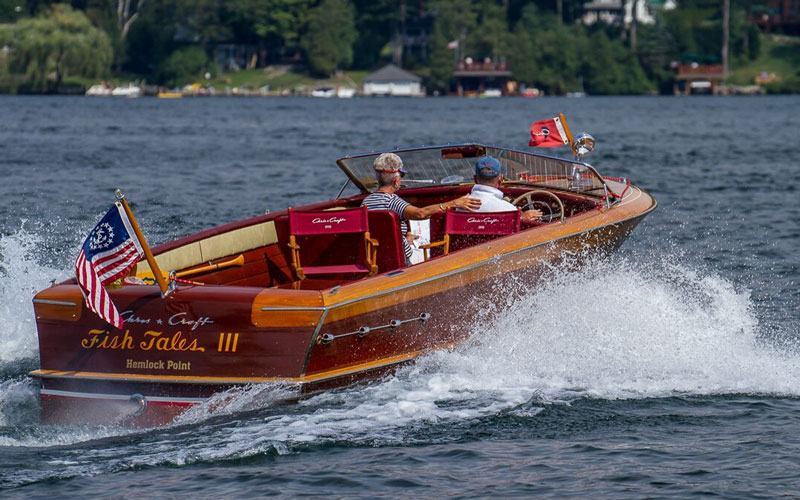 Ed and Jennifer Scheiber have owned this boat for about ten years, but even before that, they enjoyed hours of pleasure in this boat which belonged to their neighbor at Lake George.  In fact, Ed helped care for the boat.

The 23 foot Holiday, introduced in 1950 as a 1951 model, was the queen of the budding sport-boat fleet.  It was a top-of-the-line model which featured a built-in bar, a vast open area aft anchored by an enormous curved rear seat positioned over a newly designed 40-gallon fuel tank which made it possible to eliminate the rear deck.  The 23-footer is a big boat with an eight-foot two-inch beam and is powered by a six-cylinder Hercules ML producing 145 hp at 3,000 rpm. Styling cues include a steeply raked V-windshield, a flush blonde bow cap and rounded covering boards which carry the contrasting look all the way back to the transom.  The shift lever was mounted on the steering column.  The Holiday was more expensive than other utilities (around $4,400) which most likely contributed to the fact that only 88 of the 23-footers were built for the 1951-53 model years.

The Scheibers bought Fish Tales III after having Reuben Smith do an inspection. Pronounced “a real gem”, after a brief soak, was tight and ready to go. Ed Scheiber did re-build the carburetor and distributor.  Eight coats of varnish seem to be the magic number to bring her back to show-room quality. 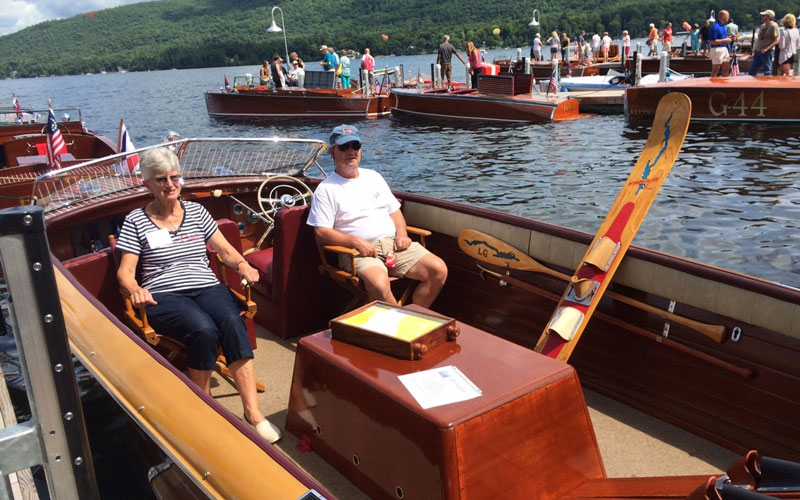 Thank you, Ed Schreiber, for these pictures and information about Fish Tales III.

If you have a boat or boating story to share, please Email to [email protected] or click this button:

Individual pictures of a boat will be included in the next Tuesday Tour of Vintage Boats
include owner’s name(s), year, make, model, given name, location, and photographer if known

Boat Story may include several pictures.  The story might focus on the history, or restoration, or travels with the boat, etc.

Event Report may include several pictures to tell about an event which involved vintage boats or boating.

Announcement – sometimes it’s beneficial to spread the news about a change in a planned event or share breaking NEWS.
Having at least one picture with the announcement helps to present the news, but not necessary.

If you view this website – consider it your own place to share what is happening in your corner of the boating community.