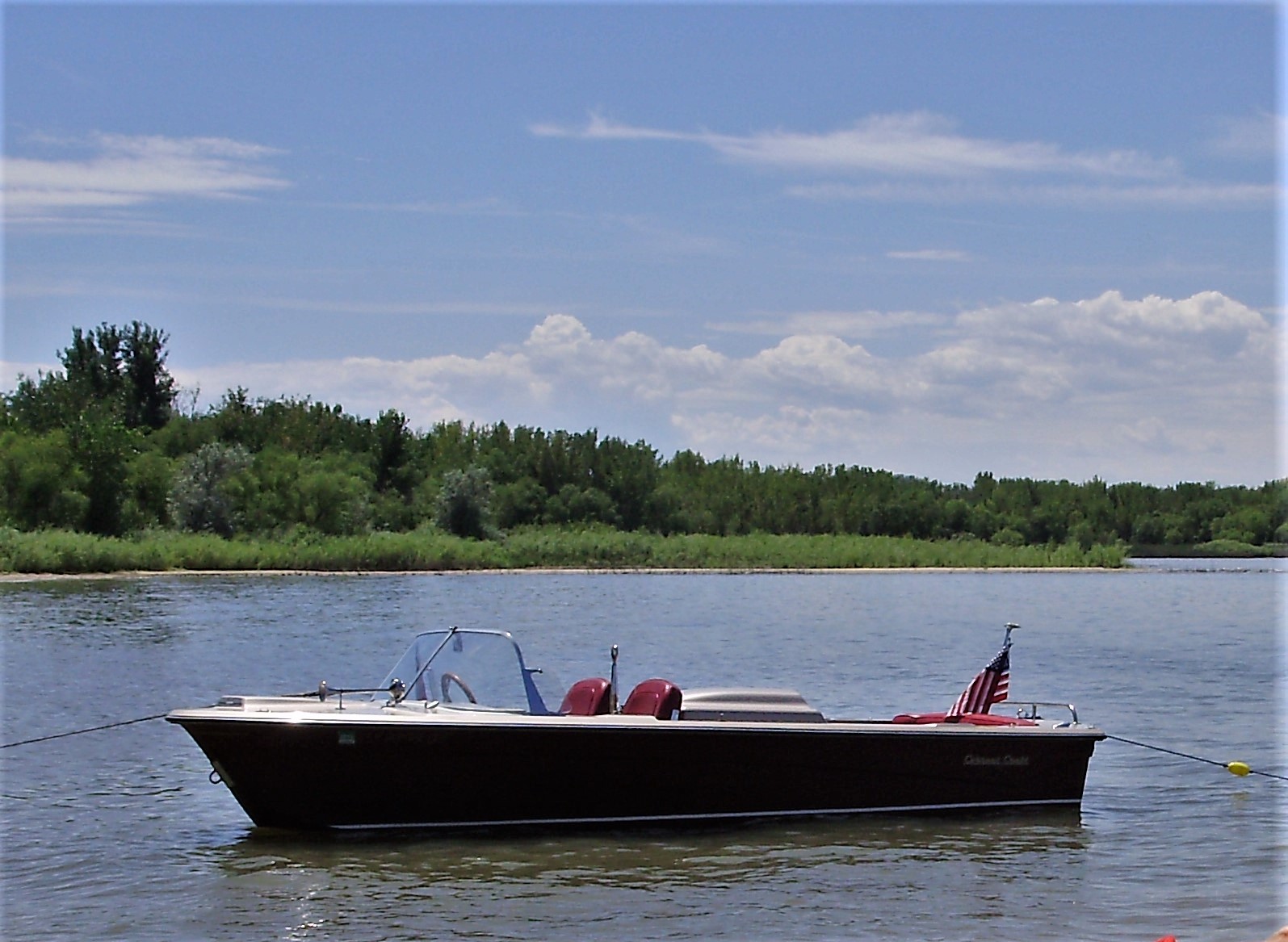 In the 1960’s I worked summers at an island camp above Lake George in the Adirondacks. Transportation to the island was via a fleet of beautifully maintained 50’s Chris-Craft Holidays. In 1965, the camp was given a new Correct Craft ski boat. Those wooden Chris-Crafts were gorgeous, but it was love at first sight with the little ski boat.

Fast forward to 2011. Married and living in Colorado, after 10 summers of getting wet in our little fishing boat, we wanted something bigger. Within a week, our Tahoe came up on Craigslist. She hadn’t been on the water for years and had been “modernized”. Someone installed an automotive carburetor and distributor. The unsealed carburetor could vent gas into the bilge. The distributor ran backwards on the reverse rotation engine. With incorrect parts and cobbled wiring, it was amazing the boat hadn’t burned to the waterline!

We weighed restoration choices. Being in our mid and late 60’s, we didn’t have time nor budget for a concourse restoration. We decided to at least get back to a period “look”, Thus began a two-year do-it-yourself rebuild. We gutted her to an empty shell. Getting her shipshape meant fixing holes in the hull, refinishing the deck, new flotation, stringers, and floor, plus a new interior. For reliability and safety, we overhauled the engine, replaced the transmission, installed a bilge blower, upgraded fuel system, and rewired her with correct color and sized marine wire.

The October of 2013 launch was marred by being caught in a sudden record setting thunder/hailstorm and engine problems. After several attempts to fix a mis-firing problem, a trip back to the machine shop and some head scratching revealed the only reverse rotation camshaft available was from a bigger engine with a different firing order. Switching spark plug wires brought the engine up to full song plus some extra horsepower.

Our Correct Craft is a family project. To honor the First Mate’s profession, we changed the name from “Bub” to “Schoolmarm” The “school” of fish underneath contains the names of our grand kids and goddaughter. We use Schoolmarm for family and neighborhood barbeque/tube towing parties at nearby Cherry Creek State Park. With lots of people getting in at out of the boat during tube towing it gets a few scratches, but the fun is worth the touch up trouble.

We joined the ACBS Rocky Mountain Classics Chapter a few years ago. While we may be the least “concourse” boat in a chapter with some terrific restorations, our experience has been welcoming with an overriding love of old boats. The Chapter’s home waters are Grand Lake CO at the southern edge of Rocky Mountain National Park. The annual show on Grand Lake is our can’t miss event. The setting and the array of beautiful wooden boats takes me back to Schroon Lake in the Adirondacks where I learned of appreciate classic boats many years ago