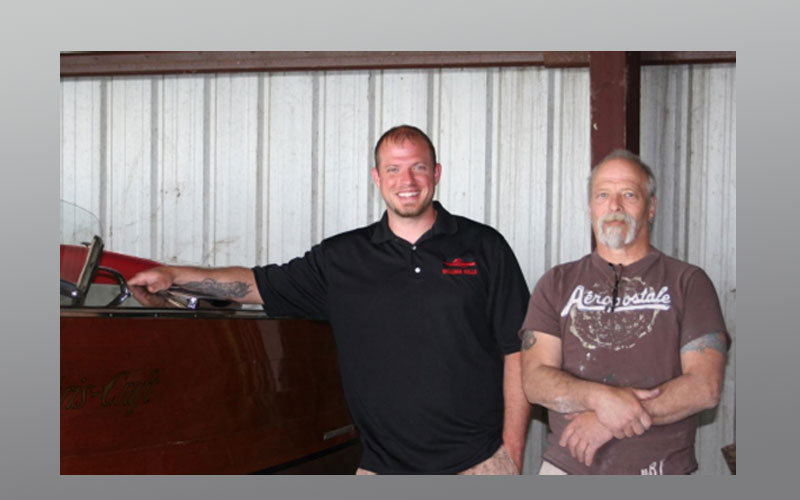 This news post is for Father’s Day Weekend.  It was written by Nicole Landers for Wine Country Classic Boats Chapter.

At first sight, I would describe the large warehouse-like building as unassuming, but that was before I walked through the door of the 3,000-square foot workshop of Hullings Hulls.

I immediately realized the extent of restoration work going on within these walls. The smell of the tools of the trade – fiberglass, paints, varnishes and sanded wood welcomed me before I gazed my eyes on the impressive boats in various states of completion. Adam Hullings, owner and operator of the business and his father, Ralph Hullings, greeted us with coarse handshakes. The shop is clean and bright, perfect for doing the detailed work required on these prides-of joy.

When I asked Ralph how long he’s been at this, he explains that he has over 30 years of experience at various shops around the area, most of which were in Branchport. Starting out as a mechanic, Ralph gained experience in fiberglass, gel-coating, spray paint finishing and woodworking. “It’s time to start transferring this knowledge to the next generation,” Ralph gesturing towards his son. Adam chimes in that he would “plug boats for candy” on the days he went to work with his Dad starting at age ten. That was the start of his passion for boat restoration and ultimately of a successful business. Adam worked alongside his dad for ten years in Branchport, then three years ago, the duo made the decision to strike out on their own, first leasing, then purchasing the huge building and never looking back. “It’s your baby,” Ralph says to his son, referring to the business. “I’m his boss now,” jokes Adam. But with some seriousness expands upon his feelings that there’s pride in being one’s own boss, interacting with the customers directly, choosing suppliers that meet their standards of quality and regaining the joy that comes from seeing their finished products after hours of back-breaking work. Ralph agrees, stating “I enjoy my work again.”

“Wood is our passion,” Adam explains, as we are guided through the door into the second 3,000-square foot unfinished area where a dozen or more sleeping beauties lay in wait for their turn on the water. “This one here is from Georgia,” Adam’s uncovering a pink and black wooden Jersey Speed Skiff christened Pink Lady. Ralph proudly tells us that “it holds two world records including one straight away record.” He goes on to explain that in the 1920s competitions were held on Tom’s River and Sandyhook, New Jersey. The boat looks almost new but I discover it came in with “hogs” in the hull –areas where the boards became indented at the contact points of the trailer it sat on. To fix this, Ralph explains a humidifier is placed under the warped areas after which a brace is installed until the boards are dry and maintain the original form of the hull. 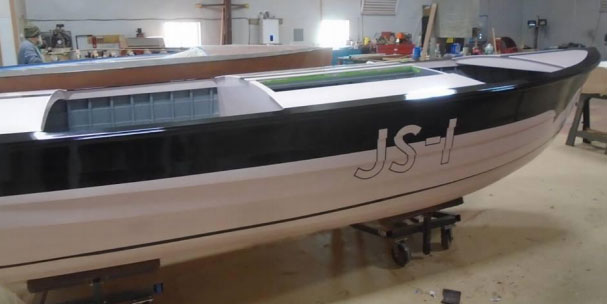 Another tarp gets peeled back unveiling a beautiful forest green Penn Yan King Fisher canoe that was recanvased, and fitted with a new transom, outer keel and stem. The process for fixing this boat is as amazing as the boat looks. The warped white oak boards were taken off and boiled until they were “like spaghetti,” Adam grins. The tools used for this process include two turkey fryer burners and a 12-foot by 14-inch steel tank, Ralph interjects “a heavy thing to move around.” 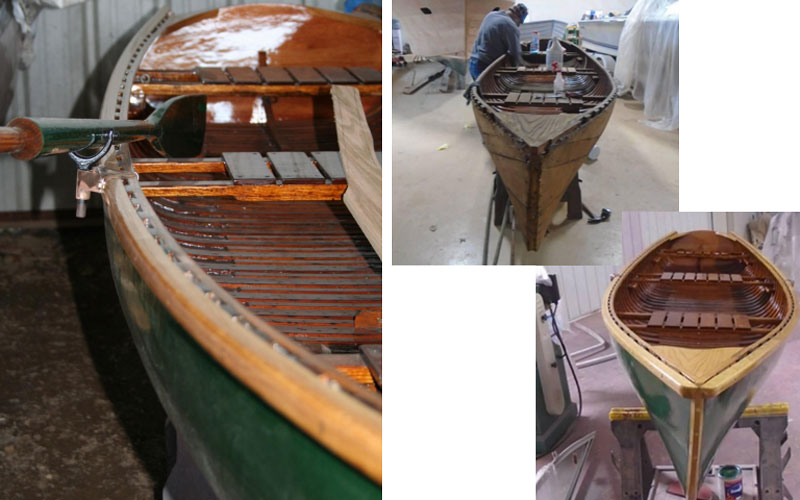 I ask about the equipment and I’m shown a very impressive joiner originally used in the Penn Yan Boat Company. The newest addition to the shop, Ken Johnson, is busy working on some fittings as Ralph shows us the typical tools they use for their work. Ken brings 30 years of experience to the operation, totally a whopping 75 years of combined experience between the three men. Various band saws, belt sanders and planers are strategically placed within the shop. Good old-fashioned elbow grease is needed much of the time, keeping these guys in good physical condition. All the glamour and romantic notions of boat restoration are blown out of the water, however, when Adam describes the hazards of sanding an anti-fouling finish off the bottom of a boat and being covered with blue dust – “turning yourself into a Smurf,” jokes Ralph. All joking aside, these boats are beautiful when they’re finished, making it worth the effort and discomfort. Customers show their gratitude by making referrals, coming from as far as North Carolina and Georgia.

Finally, Ralph shows us is a 1942 Century Sea Maid Barrelback, one of only six known to be left in the country. These boats were commissioned by the Army-Navy for World War II. In his spare time, Ralph is researching the providence of this boat based on its hull number. Century boats were single-hull boats, making them prone to rot. With the skills and knowledge between them, the craftsmen at Hullings Hulls are improving Century boats by using a design feature of Chris Crafts, a double-hull.

Adam supposes his five-year-old daughter, who doesn’t like getting dirty, may not join in the boat restoration business but his 9-month-old son is a better bet! With a start like this, the chances are good that Adam will pass on his knowledge to the next generation just as his dad, Ralph is doing now.

Hullings Hulls will have a booth at the Wine Country Classic Boat Show July 21-22 and plans to have a few of their finished boats on the water for spectators to admire.

Thank you, Patti Bandy of the Wine Country Chapter, for sharing this article.

What is happening in your Chapter?  Email news and pictures to [email protected]
or Click here to submit pictures or news about your chapter events.

Click here to look at the map of the 53 ACBS Chapters.