A Promise Is A Promise 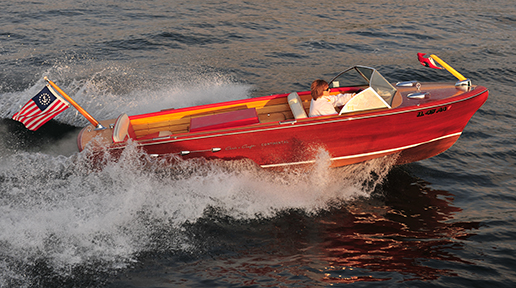 This boat was purchased new in February 1957 by Karen’s late parents, Robert and Maxine Birch, of Griggsville, IL. Her dad became a Chris-Craft dealer in 1956 and Karen has his original franchise certificate. The boat is all original and Karen has the original prop, fenders, hand spot light, ladder and water skies that her dad used. Her dad’s captain hat sits so proudly on the boat’s dash. Karen uses one of the original canvas boat covers that had never been used and was being stored in her dad’s attic. The boat spent most of its time on the Illinois River in central Illinois where Karen has great family memories. The last time the boat was in the water was in the summer of 1978 on the Mississippi river. Since then the boat had been sitting on her original cradle and boat trailer in a machine shed on the family farm. In May of 2010 the boat was transported by flatbed to McHenry, IL where it was completely restored by Fox River Valley Boat Company. The summer of 2011 was Birchwood and Karen’s first year of boating. Since then the boat has won various awards through the years at various boat shows. In September 2016 the boat was given the honor of being on the cover plus an article in a national boating magazine called “Classic Boating”. The boat was never named so Karen choose “Birchwood” in memory of her late parents. Karen’s late parents are always with her on the boat and is a constant reminder of how wonderful her parents were and the fabulous childhood they gave her. When asked about the boat Karen always says: “I made a promise to my dad that I would take care of his boat. And that’s what I intend to do”