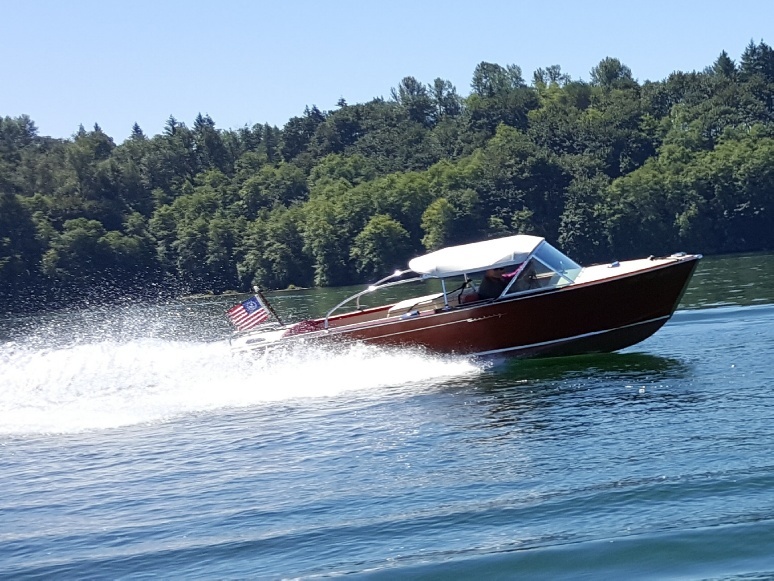 by Wendy Nelson member of the Columbia Willamette chapter

A boat’s name often tells a story. With a name like Sunken Treasure, it’s bound to be quite a tale. The story begins in 1966 when a 17’ Century Resorter RS66175 was built in Manistee, Michigan, one of 129 of that year’s model. The boat was sold to Tobler Marine in Hayden, Idaho with a Crusader 327 / 250 HP engine. Cost – $4,990. Add-ons included a stern boarding ladder, ski tow assembly, foot throttle control, and a permanent sliding soft top. Added cost – $1,146. That’s a grand sum 52 years ago.

The boat lived a happy life on Hayden Lake, Idaho, with owner #1 until 1973 when she was in an undisclosed accident with another boat and sank in 160 feet of water. That’s deep and cold. The boat sat on the bottom of the lake for ten years until ’83 when deep-water skin diver, Tom Michalski, discovered her. He spotted a ski rope floating up from the bottom of the lake and followed the rope down to find it still attached to the submerged Century. Tom noted the location and came back two weeks later with his work boat and a crane for salvage operation. After raising the Century Resorter from the depths, Tom’s cousin, Dennis Purdy of Coeur d’Alene, Idaho, bought the boat for $500.00. The flags were still in place. Dennis then restored the salvaged boat as best he could.

During this time, Sid Young, owner of Stan Craft Boats in Coeur d’ Alene, introduced Dennis to the original owner. Dennis took the boat over to owner #1’s house to show him the completed restoration. The original owner gave Dennis some of the paperwork that he had kept. Boat owners tend to save stuff. Then he took Dennis out to the garage and hanging by ropes was the sliding soft top for that very same boat. The original covering boards were used in the restoration and still had the matching brackets. So, they installed the soft top after it had “rested” in the garage for over 13 years.

The restored and water-worthy Century Resorter was used by the Purdy family at their cabin on Lake Coeur d’ Alene for the next 20 years. During that time, Rodger Wright (a family friend) visited the Purdy’s cabin and admired Dennis’s work, rode in the boat, and even water skied behind it. It got to the point where the bilge pump ran almost all the time, so the boat was retired and sat unused for another four years.

In 2010 Dennis’s brother, Don Purdy, talked him into letting him replace the bottom on the Century. Don and Rodger brought the Century Resorter to Portland, Oregon, to start the project. Two and half years later, the boat was done. Don worked on the project with the advice from Jim West of West Coast Classic Boats Restorations, Vancouver, Washington. The keel was replaced, as well as some frames and the transom, a 3M 5200 plywood bottom was mounted, new side planks and covering boards added, and the correct stain was used with 15 coats of varnish. Don even installed the correct interior from A & A Marine. A new trailer was ordered from Ryan Trailer with a swing-away tongue, spare tire & wheel mounted, cage rollers, and logo step plates (“1966” in the front and “Century” in the rear). The boat was now fully restored and absolutely gorgeous.

Dennis wanted to pay his brother Don for the restoration but when he found out how much the work had cost, he sent Don the title. Now Don was owner #3 and named the Century Purdy Special. He enjoyed using the boat in the Portland area and took it to Lake Coeur d’ Alene every summer. This ’66 beauty won several trophies at boat shows in Oregon and Idaho.

During this time, Don was introduced to Sid Young of Stan Craft Boats. Remember, Sid knew the owner #1. Don told Sid he would like to build a 22’ gentleman’s racer boat and Sid said he had frames for a 26’ boat that he could modify to 22’. That fall, Don, Rodger and Jim West drove to Coeur d’ Alene with a trailer to get parts including a keel, frames, and mahogany planks.

Don spent 3 1/2 years to completely build his new vessel, Hell Bent G-66, with the “66” as a tribute to the 1966 Century Resorter and its history. He realized that two boats were one too many, so he offered the Century back to his brother, Dennis, who said, “No! It’s too nice for me!” Don’s children wanted it but could not store it or maintain it. After 33 years with one family, the boat was purchased by family friends, Rodger and Colleen Wright (owner #4) in 2017 and renamed it Sunken Treasure. The next chapter of this story is currently being written as Rodger & Colleen enjoys boating with family and friends. This boat is truly an enduring treasure considering her lengthy history, both on and under the water.