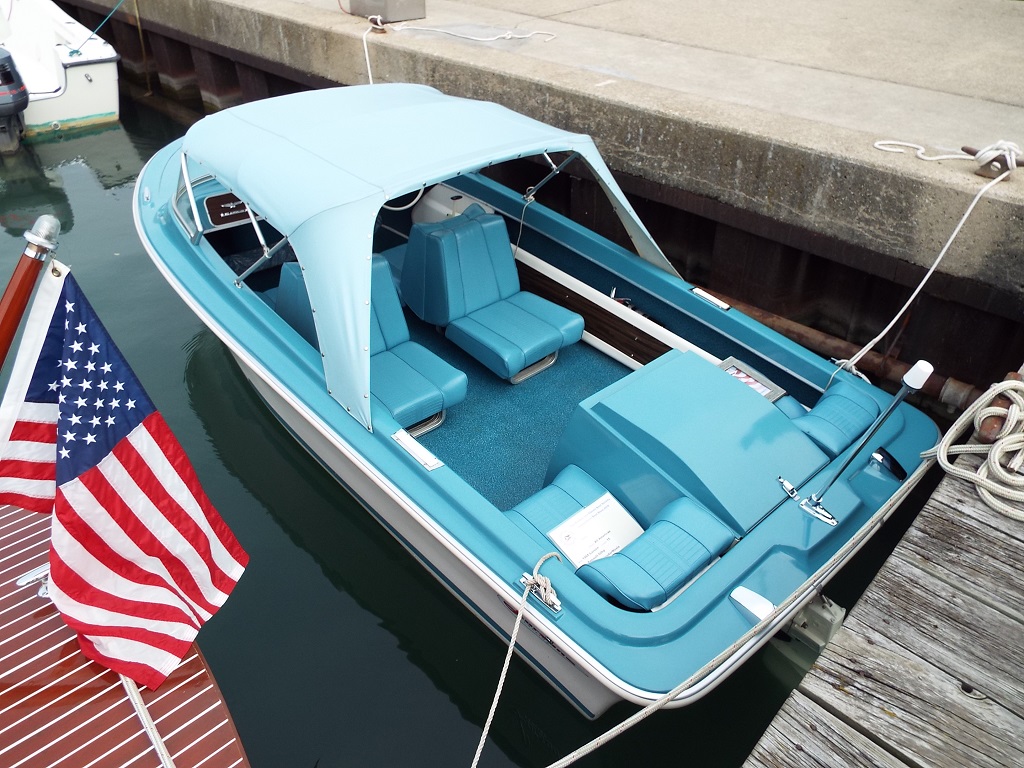 Our Larson is a 15’ All American with a 60 horsepower 4-cylinder Renault and Mercruiser 0 outdrive.
We acquired Larson in May of 2014 from the niece of the second owner. The boat was purchased new in 1966 from Lubbers in Hudsonville Michigan by the DeYoungs to pull their daughters skiing. Unfortunately, the boat did not have enough speed or power for them so it saw little use. The second owner (Don) was at work and mentioned to a coworker that he was looking for a boat for he and his wife. One of his coworkers knew that the DeYoungs would consider selling the boat so he passed the information to Don who then purchased it. Again, it was decided the boat was not fit for water sports and again went into storage, this time for 48 years. In 2014 the family showed interest and the boat was removed from storage and brought to a marina for a much-needed tune-up. After a few unsuccessful attempts, the boat was listed for sale by Don’s niece Terri and her husband.

Jon had worked at a marina when he was a teenager and is familiar with fiberglass boats of all ages as well as inboard/outboards. When I found the Larson for sale online, it drew my attention because it was close to Amanda’s favorite color and I realized the small Mercruiser that it had and how uncommon it was. I had to check it out so I made the call and scheduled a time to view it. My friend Scott Rissi and I arrived, it was obvious it had been stored inside all these years. The seats, vinyl top, and rub rails were soft with no evidence of aging or abuse. There was even plastic wrap on some of the floor that was never removed. After some negotiation and an agreement reached, Terri told us she had tried to auction the boat off with no success and had it listed with no one showing interest. I couldn’t believe it!

On the way home, Scott suggested entering the Larson in the boat show on the Boardman River in Traverse City that upcoming August. With this in mind I went to work on the engine and fuel system. Unfortunately, the gas tank had been stored with over half of a tank of gas for decades and was full of something like varnish and rust. After a significant fuel system cleaning which took days in order to preservice the original upholstered fuel tank, I was able to bring the engine back to life. Within a week it was in the water and making waves.

We’ve used the boat periodically for boat shows, to teach our 5 year old Christopher how to ski, and cruised around some of the lakes and rivers throughout Michigan.

Aside from maintenance items like a new fuel line, carburetor rebuilds, and filters, this boat is 100% original including its finish and chrome. It has never even been polished.

One of the reasons the Larson is special to us is because it led us to our membership of the ACBS. It has won several awards and was on display with several classic boats at the Grand Rapids Boat Show in February 2018. Its always fun to show the boat and share its history since many people can relate to it.