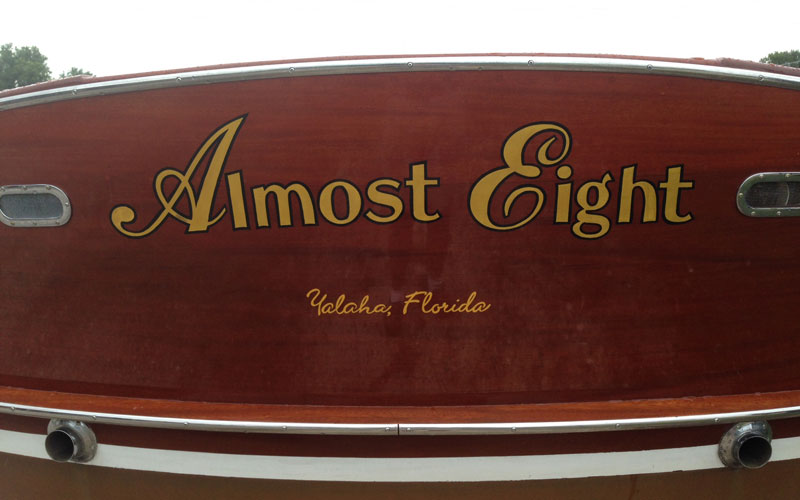 Walking the docks at any antique and classic boat show leads to wanting to know the story of “What’s in a name?”

Here is the story behind naming this beautiful 1962 Shepherd ALMOST EIGHT.  The story first appeared in the Sheerline, the magazine of the Sunnyland Chapter where Bill and Kathleen Root are active members.

What’s In A Name? Bill and Kathleen Root’s ALMOST EIGHT is a 1962 Shepherd V-Drive runabout powered by it’s original 413 Chrysler wedge engine.  Shepherd built their boats in Niagara On The Lake, Ontario, and for many years was the largest builder of wooden boats in Canada. ALMOST EIGHT is one of a very few of the late model Shepherds remaining, having been built during the period when Shepherd had been purchased by the Trojan Boat Company and had turned their focus from runabouts to cruisers.

In April of 1998 Bill and a fellow Fingerlakes Chapter friend took a trip to the Muskoka region of Canada for a Toronto chapter spring workshop tour. The third stop on the tour was Stan Hunter’s shop. As Bill headed down Stan’s driveway he spied a big Shepherd sitting in front of the shop with a “for Sale’ sign on the trailer. Bill is a long time Shepherd fan, so he recognized this boat’s distinctive hull shape immediately. She was old, she was tired, but she was all there. She was exactly what Bill wanted. So although he had come to the shop tour with no intention of buying a boat, he made the owner an offer, it was accepted and two weeks later Stan delivered the boat to Bill’s storage barn in Upstate New York.

The restoration of the boat began with a new bottom, including all new frames, with the help of John Ford. Halfway through the bottom job Bill got a big work promotion and was transferred to Minneapolis. He found a property outside of St. Paul on five acres, built a pole barn behind the house with stalls for Kathleen’s horses in front and a workshop for the boat in the back. When the bottom job was finished, Bill and Kathleen drove back to Syracuse and hauled the boat back across country. Unfortunately, when they got off the Thruway in Cleveland for the night, they discovered that the engine hatch had blown off somewhere between Cleveland and Erie, Pa.

Once the boat was comfortably ensconced in Bill’s workshop. and he had a chance to take another closer look at it, he decided to completely rebuild it.  The bottom had been done using the West System, so Bill decided to do the whole boat that way. That meant all the planks had to come off, all the side, deck and cheek frames had to be replaced, and the entire boat skinned with plywood prior to putting the salvageable planks back on. As often happens with a restoration, one thing leads to another. Fortunately, Bill had the help of local restorer Dan Nelson to keep pointing him in the right direction. Working primarily on the weekends, by the time the hull was finished all that remained of the original boat were the forward deck planks, about a half dozen topside planks, the dashboard and the floor boards. Everything else was new wood. Bleaching, staining and twelve coats of varnish later, with plenty of help from Kathleen,  she was finally ready to mount the freshly chromed hardware, send the engine out for rebuild and put in the new upholstery. Then Bill got transferred again, this time to the Mt. Dora area of Florida.

Bill & Kathleen moved to Central Florida in the spring of 2005, and quickly got involved with the fine folks of the Sunnyland Chapter. They found a place to do the final finishing of the Shepherd and an excellent mechanic to do the engine rebuild. John Freeman was contracted to bring the boat down from Minnesota, and a target for completion was set as the 2006 Sunnyland boat show in Mt. Dora. Bob and Johnny Steele of Steele Fiberglass and Marine in Leesburg did the engine rebuild, the beautiful upholstery and canvas work, and assisted with putting all the pieces back together. The last few days were a frenzy, to say the least. The cutwater was actually put on the morning of the show. We arrived at the show ramp and launched successfully on Friday, March 24, 2006, ALMOST EIGHT years after we bought her. 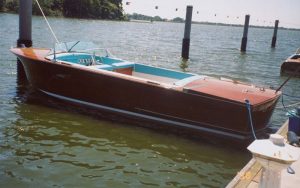 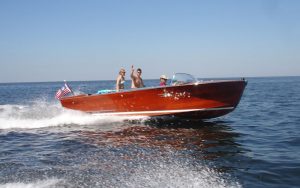 What is the name of your boat?  Share the story and a few pictures by sending an email to [email protected]