An Obsession with Higgins 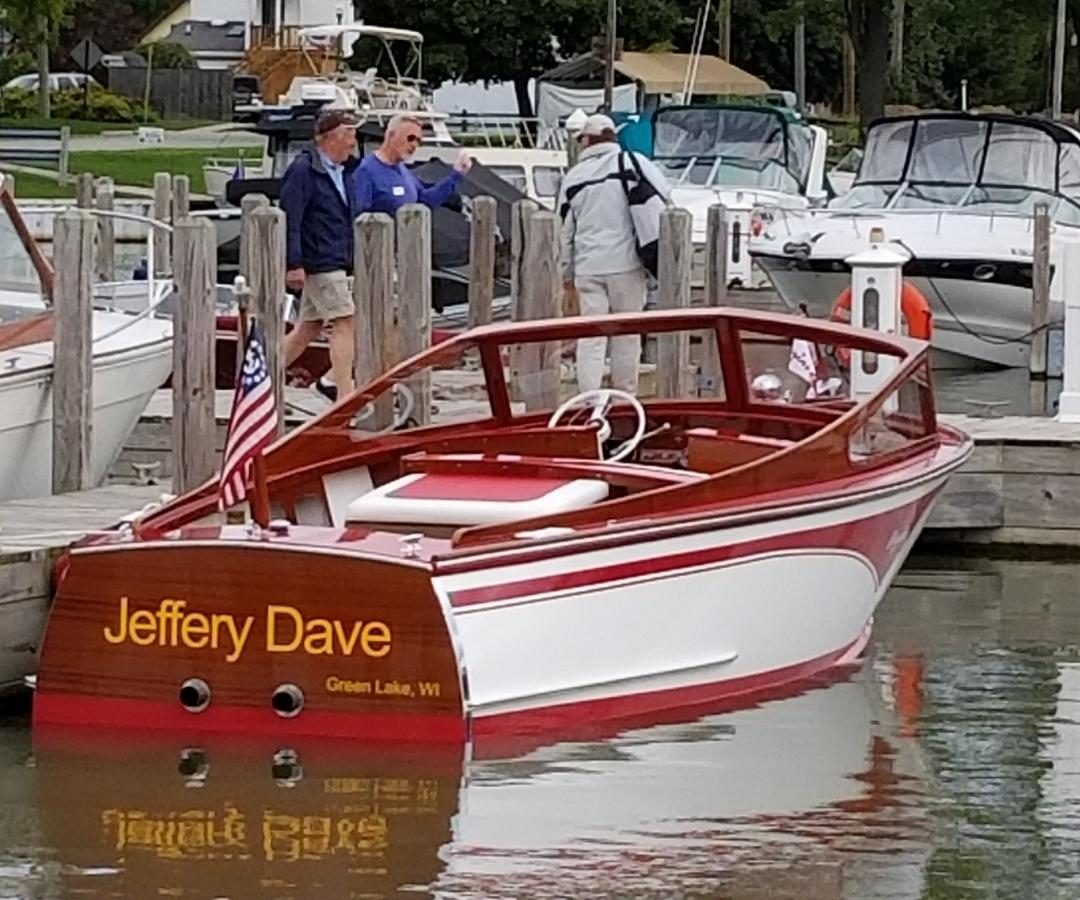 By Jeff and Renee Davey, members of the Glacier Lakes chapter.

Our Higgins obsession started about 37 years ago while on vacation in northern Wisconsin. We stopped at a local marina and purchased a 1947 19’ Higgins Deluxe Runabout. After sitting in storage for over 30 years, we finally decided to restore her. She is now named “Covergirl” because my wife owns a marine custom cover and upholstery shop. It took me about 2 years to restore “Covergirl”. While doing this restoration, I saw a picture of a 23’ Higgins now named “Foxy Lady”. It was one of the nicest boats I have ever seen and it was winning numerous awards. I had to have one! I called Jeff Oppenheimer, the Vice-President of the Higgins Classic Boat Club to see if he knew of any that were available. I then made some phone calls and found myself picking up my 1949 23’ Higgins just weeks later. We put this boat on the back burner so we could finish the boating season with “Covergirl”. We took her on the 2017 Racine International Show pre-event Milwaukee River Cruise. It was a blast!

Now I had the bug to show a boat at the next International show. It would be the “Boat the Blue” 2018 at Port Huron. Michigan. We then joined the ACBS and the Glacier Lakes Chapter. When we purchased the 23’, she had no windshield at all. The windshield had been lost or damaged sometime about 30 to 40 years ago. The boat was sold new in 1949 at Touristville Boat Shop in Iowa. This boat has had at least 3 owners before us. One of the first owners actually re-decked the entire boat and made it an enclosed double cockpit forward. The last owner before us turned it back into a 3-seat runabout with a motor box but still no windshield. We decided to have Norton Boat Works in Green Lake Wisconsin make an all mahogany custom windshield similar to one we had seen on a Custom Coronado a few years back. We wanted to keep the styling of the Higgins, and hopefully give it that stunning look and cool appearance! I think we accomplished both!

Now it was time to look at the hull. While pulling up the floor, we found cracked and rotten frames along with a keel that was separated and rotted as well! This was a little more than we anticipated. All new frames were made from white oak along with a new white oak keel and engine stringers. All the new parts were coated with 2 coats of West Epoxy before assembly. A new bottom was scarf jointed then epoxied and finally screwed and epoxied to the frames. A new gas tank and lines were made and installed. Dual exhaust was added with new teak and holly flooring. I had a 1997 350 magnum 5.7 MPI 300 HP rebuilt and hooked it up with a C71 Velvet Drive with all the accessories to make it work. (I wanted the ease and reliability of a newer motor). We moved the 350 Magnum 10” forward from where the original Chrysler Royal straight 8 sat to make better planing ability and more rear cockpit room. This worked perfect! I also cut 10” off the engine box in the process. We designed an all new interior with colors to match the boat. People seem to love the red and white color combination!

The top deck was painted gloss red and many coats of varnish added to the mahogany windshield and front bow pieces. They look great together! We kept the original foot pedal for the throttle and the shifter on the column for a nostalgic look, but they are non-functional. The name “Jeffery Dave” comes from a 1965 Dunphy my parents purchased new and named it “Jeffery Dave” after their only son. With that in mind, it only seemed right to use this name again and my parents approved!

We finished the boat about a week before the 2018 “Boat the Blue” International Show. When I signed up for all the pre-events and the show itself, the boat was still upside down with only a few frames being done. We did most of the work ourselves, so it was 7 days a week for quite a while! We really hoped we would have enough time to finish!
We participated in all the pre-events at “Boat the Blue” and had tons of fun meeting great people from all over the U.S. The “Jeffery Dave” received the 2018 Best Higgins Award, 2nd in the Hagerty Youth Judging and the ACBS Silver Award in the classic utility restored division. We are already planning for the 2020 show in Bay Harbor MI.

Now that we have had the chance to use this 23’ Higgins on big water, we find her to be roomy and dry with plenty of power! This is a fun boat to be in! This restoration was overwhelming at times but the awards and compliments have been well worth the effort! We are happy to have saved one more rare Higgins boat and look forward to enjoying her for many years to come!