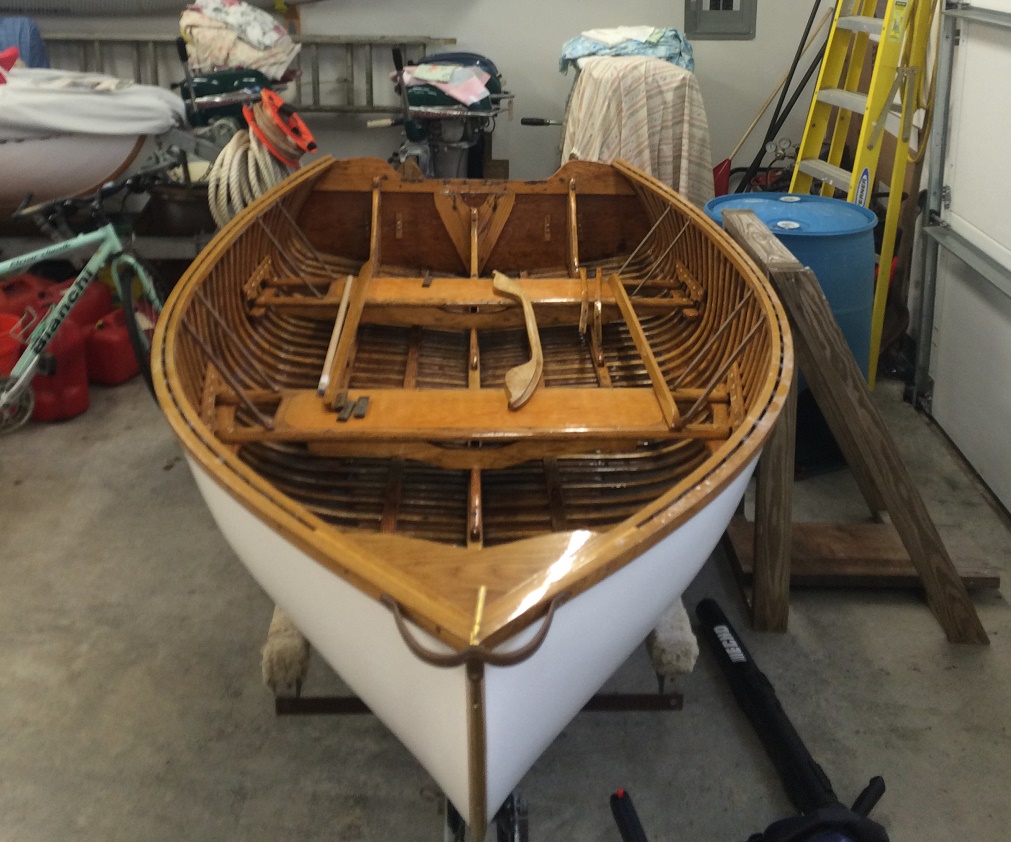 My interest in Penn Yan Swift Boats goes back to my teenage years when Swifts were among the boating hot rods of the day. Friends had 10′ long Swifts and I had use of a Hal Kelly Airborne racing runabout. The Swift, while not as fast, sure could handle and looked the part. Years passed and I became an aerospace engineer in Connecticut who enjoyed restoring Corvettes and outboard motors as hobbies. After retirement I was looking for a couple of boats to use with my old outboards. Boat size was a factor as storage space was limited. First came a 12′ center deck Swift with a Mercury Mark 30 outboard. Several others followed much to my wife’s chagrin. Then along came this 10′ Swift and Nancy actually helped in bending the new gunwales.

We purchased the boat in Massachusetts in 2014. The seller received the boat from a cousin who purportedly used it on Lake Winnipesaukee for racing when it was new. It was then that the plywood decking was installed. At some point the original canvass covering was removed and replaced with fiberglass. While no longer original, fiberglass makes the canoe type construction of the Swift much more rigid and durable. The seller used it for pleasure including for some water skiing. Years ago it was hung from the garage ceiling and left to die. When we bought it, the condition was poor and it came with a used up Mercury Mark 20 and a rusted Mastercraft trailer.

My interest in this boat was that it was an early production model that had the appearance of being an open Swift with add on plywood decking rather than the factory cedar strip decking. Sure enough, upon removal of the plywood, there it was, an oak breasthook with the Penn Yan decal still affixed. Also uncovered was the serial number TT5187 stamped in to the stem. Not many of this model were produced as most had front and center steering decking. The restoration included replacement of the gunwales, spray rails, transom knees and braces, and outer keel and stem strips. The whole outer hull was faired with lightweight epoxy compound. A derelict 12′ Swift provided some of the parts. The gunwales were made by me with steam bending accomplished using 6 inch diameter pvc pipe as a steam chamber and a Warner electric commercial grade wall paper steamer as the steam source. It worked great without the fire and scalding risk of propane heat.

The boat is powered by a 1952 Mercury Hurricane Cruiser outboard and it sits on a Tee Nee trailer. We have taken it to several boat and car shows and it tows fine behind our 1967 Corvette. Attention on the highway is remarkable as it is at boat shows. Finding time and energy to use our collection of boats and cars is difficult and now in my mid seventies it is time to “thin the herd”. Adds on the ACBS website are likely to follow.