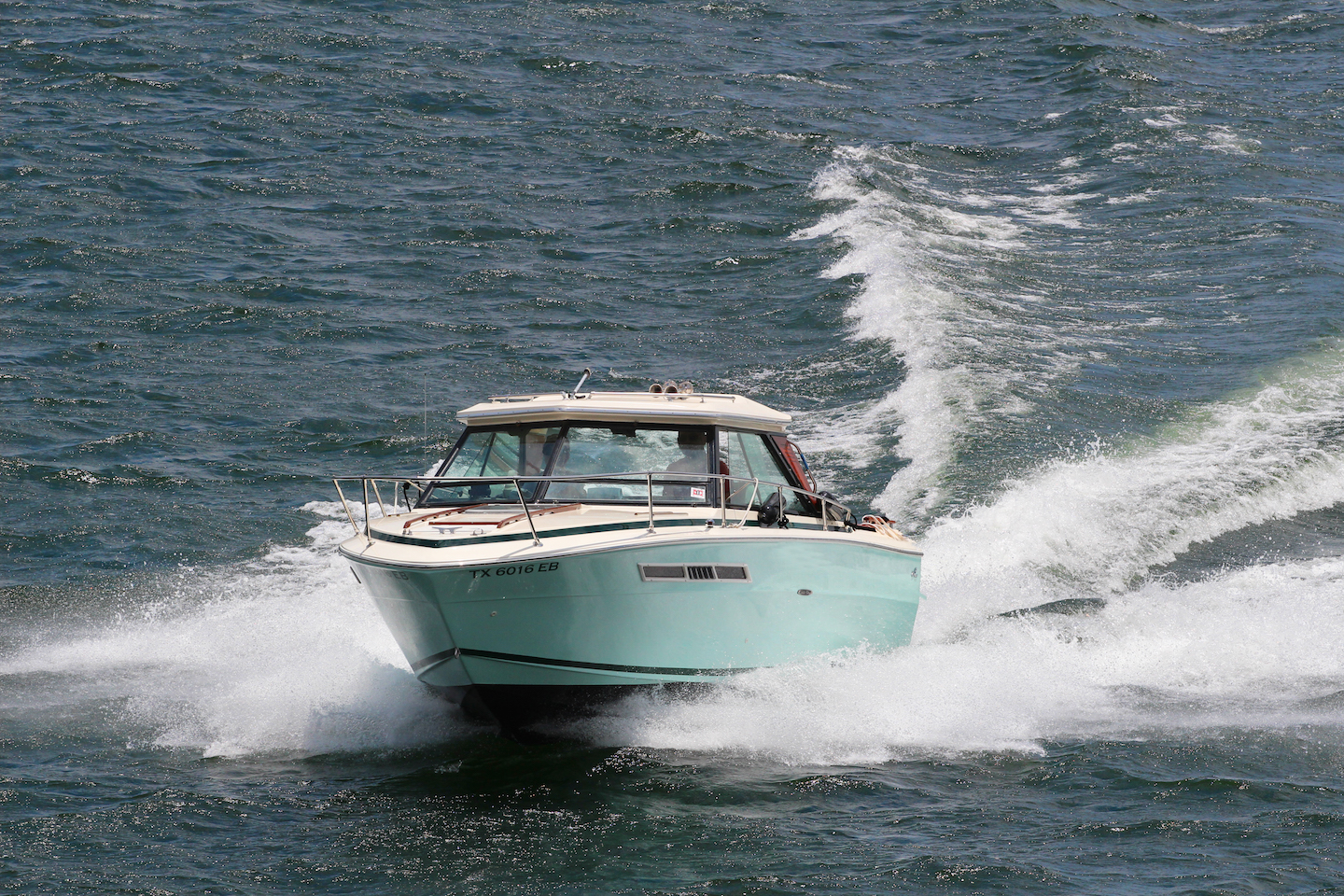 Like most things in Texas, Lake Travis, with almost 19,000 acres and 270 miles of shoreline, is known for big wind and big boat wakes. Having moved in 2017 to the Texas Hill Country with our 1952 Chris Craft 20’ Riviera named “Honey”, my wife Mary, and I decided we needed to find a bigger boat with a smooth ride that could tame rough water.

I began researching 1960s and 1970s fiberglass boats that had classic designs and hulls engineered for safety and stability. It didn’t take long to discover the Sea Ray SRV 240 which was introduced in 1968. Sea Ray had hired Harley Earl Associates to help stylize a new line of Sea Ray boats – the SRV 240. In the 1950s Harley Earl directed the design team for GM’s first Corvette.

Searching online and with the help of a boat broker, I found the only SRV 240 for sale in the US in Gulfport, MS. It was an SRV 240 Sedan cruiser on a trailer in a covered storage facility. She was a 1978 model, the last year the SRV 240 was made, and had an all “almost new” 20 year old V8 engine with 119 hours. We decided to take a road trip and see what it looked like. After a sea trial that delivered the ride we were looking for and a good survey report, we made a deal, put new tires on the trailer and headed back to Texas.

On a November Sunday night in 2017, 250 miles from home we were pulling the boat and trailer which unbeknownst to us had 70 gallons of gas onboard. Without warning, we heard a hard thump from the trailer. I immediately pulled off Interstate 10 to a gas station in Winnie, TX. Seeing the boat listing to starboard, I jacked up the trailer and the right front wheel and tire fell off. We had a broken axle. Winnie had been hit hard by hurricane Harvey just two months prior. Because every motel in the area was occupied with displaced residents and there was only one local shop that could repair an axle, it was three days before we were back on the road holding our breath every time we hit a bump.

After making it safely back to Lake Travis, we were relieved and happy to finally have the SRV 240 in our slip. But then we heard a neighbor say, “ your Sea Ray is a classic, but it sure looks tired”. He was right, after 39 years the gelcoat was faded, the wood was rough, stainless steel railings were dull. It was time to bring her back to the way she looked in 1978.

That’s when I sat down with Brian McNeill, the owner of McNeill Marine on Lake Travis, and we discussed how the boat could be restored to capture the original personality of a 1978 Sedan cruiser. Using 1978 Sea Ray brochures and photos as guides, we developed a plan to bring her back to life. We decided on a sea mist green gelcoat hull that complimented the forest green upholstery that was embedded into the interior teak. After lots of cleaning, spraying gelcoat, painting, polishing, varnishing and rewiring, the SRV 240 was no longer “tired”. Her original seventies vibe was back. With the SRV 240 restoration finished, we decided it deserved a new name – AquaDrama. Classic boating for us has always been an adventure that includes risks, challenges, collaboration, friends and the fun of being on the water.

We like the contrast in design, style and performance between classic wood and fiberglass boats. When we want to enjoy the agility and sound of a wood boat, we take out Honey (1952 Chris-Craft Riviera). But when the lake gets rough and we want a sublime ride and stability, we start up AquaDrama. Regardless of anyone’s preference in classic boats, form follows function.