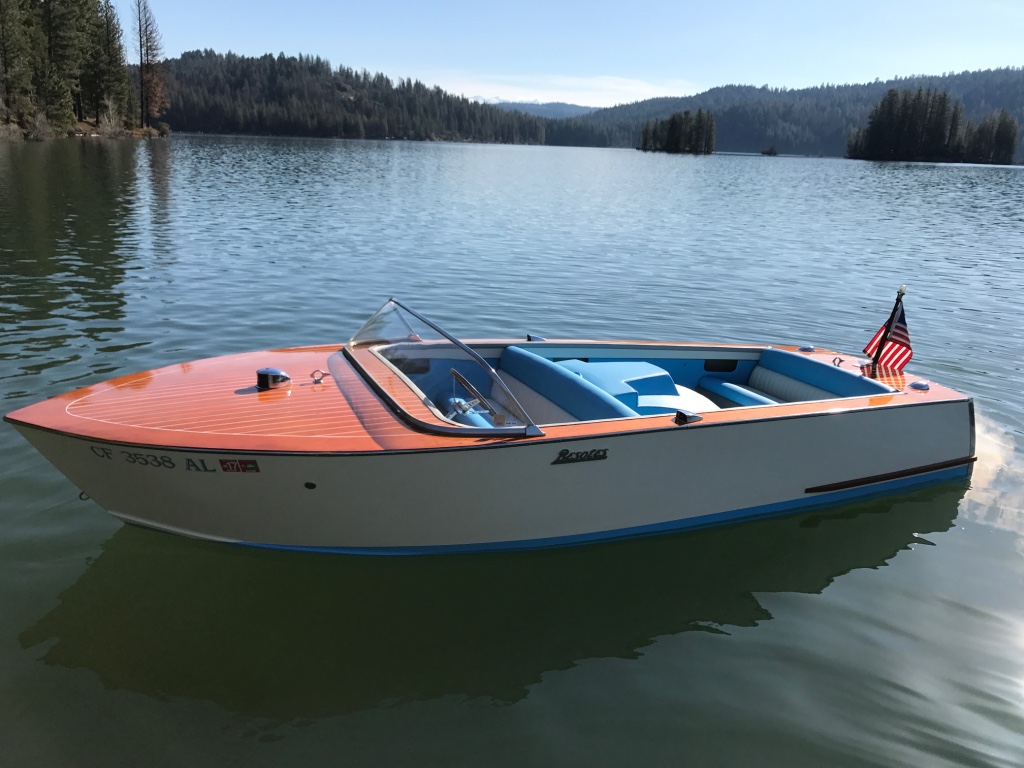 By Robert Little member of the Northern California/Lake Tahoe chapter

Aquarius is a 1962 Besotes. Besotes boats were built in Stockton CA primarily in the 1950’s and 1960’s. Nearly 200 boats were produced,and 44 boats are currently known to exist. Materials used were plywood and fiberglass over Mahogany framing and topped off with mahogany plywood decks. During restoration in 2015, an examination of Aquarius by Sierra Boat Company was conducted for any hull numbering or ID marks with no positive results. Aquarius is best described as a Tahoe Utility measuring 17’ 9” in length and 80” at her beam. She is powered by a 327 Chevy small block engine.

My family lived and worked in Stockton and around 1966 my dad George Little bought the boat from the original owner, John Wolf for about $2500.00. I was born in 1968 and grew up with the boat being a common fixture in the Stockton Delta and at the docks of the Stockton Water-ski Club through the 1970’s and 1980’s. The boat has always been used about 20 to 30 times yearly including annual trips to the Stockton Water-ski Club to Lake Shasta. On her trips to Lake Shasta she would be packed full with everything from ice-chests to Honda-50 mini-bikes, a true utility boat!

In the early 1980’s Aquarius had a close call with the bottom of the delta near Paradise Marina when my dad struck submerged concrete from a bridge construction site. The boat sustained a 3’ X 4’ hole in the starboard side near the motor-box. The prop strut was bent over as well, but my dad managed to power her back to Village West Marina and get her trailered before she sank. This event marked the first notable restoration of a section the bottom, and sides of the boat. At this time the dark brown upholstery was replaced with light blue “tuck and roll” vinyl interior with small buttons. In the late 1980’s the decks and stern were sanded and varnished. I painted the white lines on the deck during this maintenance.

In late 1998 I stored the boat at my house for a while. One day my dad said it was time to sell Aquarius to a new owner. He told me I had the first “dibs” on the boat, and I could purchase it for the amount he bought it for. In no time I paid $2500.00 dollars and started the second generation of Little Family ownership of Aquarius.

In the 2000’s we used the boat 5 or 6 times each year at Sly Park Reservoir, Union Valley Reservoir, and Lake Tahoe. Some minor repairs were done to the engine and over time the decks showed some wear and clouding of the varnish. In 2011 my dad passed away and I promised my-self that I would get her restored to her original construction. This endeavor ended up being a two-stage project; first being deck, sides, stern, and fuel tank, and second being upholstery, carpet, and motor-box rebuild.

In the winter of 2015 Aquarius was restored at Sierra Boat Company. The varnish was removed all the way down to wood, the sides and bottom were painted, and the stern was repaired and finished off with new gold-leaf lettering. At this time a new fuel tank, bilge-pump, and prop shaft was installed. In the winter of 2017, the interior upholstery and motor-box was replaced. I redesigned and built the motor-box, and then Rod Souza of Rods Stitched Interiors completed the upholstery covering everything in an era appropriate blue and white color scheme. “Orange Crate”, another Besotes that I reviewed in storage at Sierra Boat Company, inspired the upholstery design. Aquarius is now restored to a condition that is as close to the day she came out of the Besotes shop in 1962.