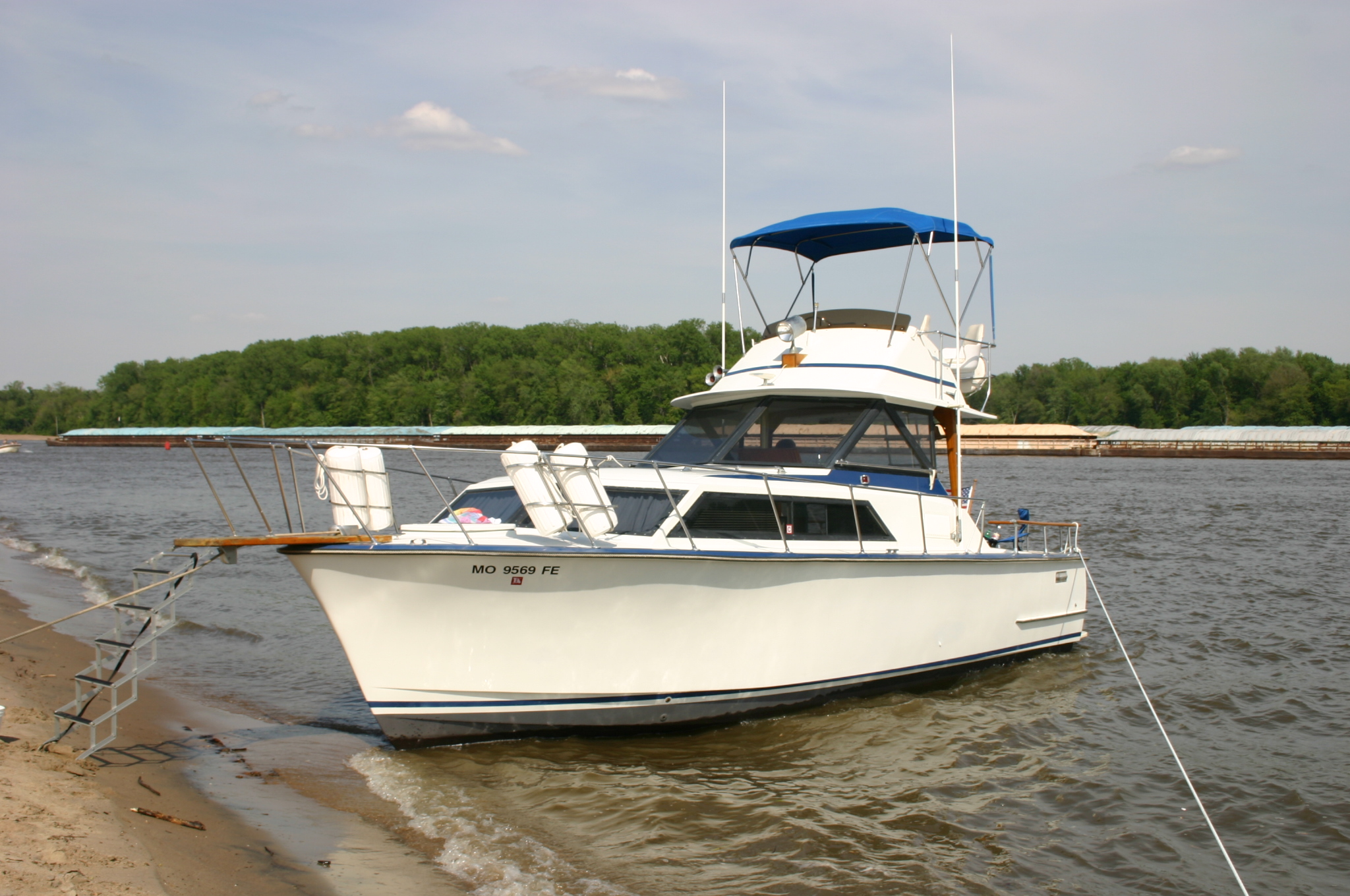 By John Bloch, member of the Mississippi Valley Chapter.

I am in the boat repair business and some years ago I had several occasions to work on a small (by Hatteras’ standards) 1968 Hatteras 31-foot Sport Fisherman. The story that I know of the boat is that it came to the St. Louis, Missouri area sometime in the mid 1970’s. It had been re-powered from two 4-cylinder Detroit diesels to two Mercruiser 454 gas engines at around that time. It subsequently changed hands 2 more times with one of the owners living on the boat for a few years. I have done business with all of the boat’s St. Louis owners from time to time, so I knew the boat pretty well, and I had always admired it for its lines and quality of craftsmanship and design. In the Hatteras tradition, it is built heavy and strong to be able to deal with the sea conditions around Cape Hatteras, North Carolina.

Over the years however, it had become neglected and needed quite a bit of TLC that the current owner was no longer willing to devote to, so he told me that he was considering donating the boat to a charity. I said to him, “Oh don’t do that, how much do you want for it?” Being in the business I am in, and knowing better, I still purchased the boat thinking that I could do a few things to the engines and sell it to someone who would love it well. But alas, the mechanicals were much worse than I suspected, and after complete engine re-builds, a new Genset, Galley re-design with fridge, new Head, Props, Shafts, Transmission re-builds, much painting, replacing some deck coring, anchor windlass, cut out the aft deck and replace the fuel tank, etc., etc., I had more money in the boat, even at my costs, that I would ever be able to sell it for. So, my wife Audrey and I decided to keep it for a while, and 14 years later, we still use and enjoy the Audy B II, almost weekly in the boating season.

We are members of the Mississippi Valley chapter of the ACBS, and enjoy hanging out with those fine “old boat” enthusiasts. We have participated in many club activities, and have on several occasions, trekked up the Mississippi River in the fall to participate in the Quincy Antique Boat Show. This is about a 110 mile on-water trip through 4 locks and dams each way.

Also, Audrey and I are members of a boat club that owns a small island on the river, and we generally have our “date nights” on any given Friday night when we take the Audy B II to that island and spend the night, along with our golden retriever, watching the river go by.

Another tradition we have is leading our local Blessing of the Fleet parade with the Audy B II. We enjoy boating, and we enjoy helping to preserve some history in the process!

See you out there!