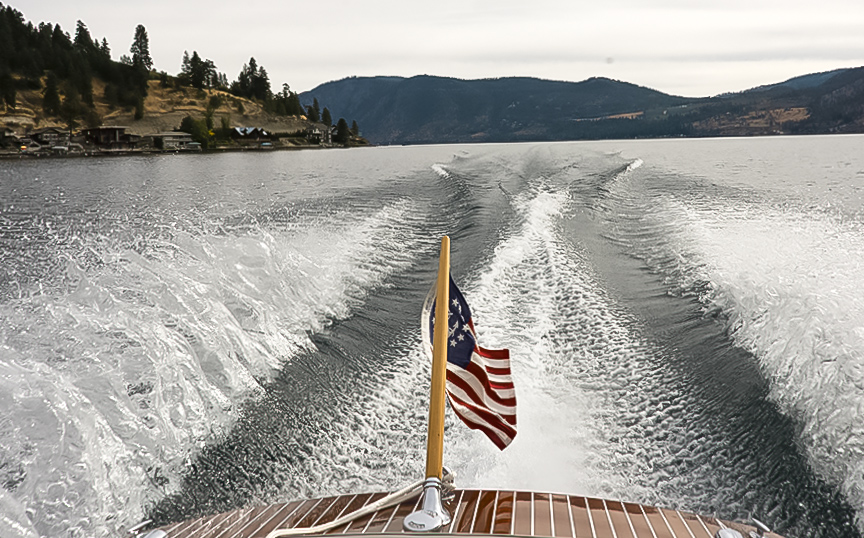 Reprinted with permission from the Marine Division at Hagerty Insurance. By Photo by Kelly Williamson, member of the Okanagan and Pacific Northwest Chapters.

“Anchors Aweigh!” is more than the U.S. Naval Academy’s fight song…or the march of the U.S. Navy…or a 1945 movie staring Gene Kelly and Frank Sinatra. During the boating season, it’s the cry of recreational boaters from coast to coast (even if few people actually say that when the leave the dock).

So, with the sun on our faces and summer on our minds, we asked our Facebook community a two-faceted question: “Where do you tie up? What’s the best summer hotspot to drop an anchor and relax on the water?” From seasoned captains to weekend skippers, your answers sent us in search of boat ramps near and far, with a lot of help from Google Maps.

Bill Mathisen sent us north to Alaska. “Depends if I’m still crabbing or longlining for halibut, and also the wind direction, as there aren’t too many places to hide out here on the bering sea (inside Golovin Bay, the east side of Sledge Island and sometimes even St. Lawrence Island). I try not to hang around Little Diomede (Island), especially the west side. The Russians get a little testy if you cross the International Date Line.

Doreen Chick posted a photo showing a road sign in Webster, Mass., that says it all (and then some): “Lake Chargoggagoggmanchauggagoggchaubunagungamaugg.” The 45-letter lake near the Massachusetts-Connecticut border was once known as Lake Chaubunagungamaug, but those 17 letters obviously weren’t enough to match the lake’s grandeur. So in 1921, the spelling bee contestant’s worst nightmare was lengthened to its current 45 letters. And it gets worse. In 2009, Fox News reported that the sign Doreen shared is actually misspelled (letter No. 20 should be U instead of O, and letter No. 38 should be an N instead of H). At least we have Matthew Pilch to show us exactly how it is pronounced. Maybe we should just throw up our hands, as many locals have, and simply call is Lake Webster.

What’s in a name anyway? In some cases, plenty. Gail Williams’ favorite place to drop anchor is Party Island (aka Ship Bottom), a sand bar just off Long Beach Island, NJ. Tom Marshall loves Party Cove on the Lake of the Ozarks in central Missouri. And who could resist Papa Nedz’s pick: Boaters Beach, a nearly half mile stretch on Saginaw (Lake Huron) near Bay City, Michigan? On the other hand, Dennis Buono vows that Ordinary Point on the Sassafras River near Galena, Maryland is hardly ordinary.

Kyle Bowen’s No. 1 boating destination is extraordinary too, and we can vouch for it, since it isn’t far from our headquarters in Traverse City, Michigan. “Elk River to Skegemog to Torch River to Torch Lake is the best all-day boat run you could ask for,” he wrote. Indeed, the trip offers beautiful water and scenery, and Torch features a sandbar that much to the chagrin of the locals (and the police), draws hundreds of energetic boaters, particularly on weekends and holidays.

Hagerty Marine’s own Carla Gernhofer embraced the mitten too, suggesting another northern Michigan gem: “Pick a spot,,,any spot…as long as it is Glen Lake.” And Jay McCumber gave two thumbs up to Sugar Island in the Detroit River (northwest Lake Erie), near Grosse Ile.

For many of you, the question wasn’t as simple as it seems. Boe Sison joked, “Where do I tie up? I’m tied up to a mortgage, wife, kids, and job.” Steve Howlett, who must be a fisherman, wrote: “If I told you, it wouldn’t be the best spot anymore.” And Mike Stone couldn’t help but see opportunity in the answers he read. “Wow, look at all the watering spots to go metal detecting. Thanks, everyone.”

But the final words are reserved for Shawn Barnhart and Eric Hancock, who definitely know how to live in the moment. Shawn’s favorite boating destination is “wherever the water is clear and the beer is cold.” As for Eric, “home is where the anchor drops.”