Today at Headquarters we received the best piece of mail, ever! One of our ACBS members sent in their membership renewal form using twenty vintage 1¢, 3¢, and 4¢ stamps.  Yes, 20 stamps! The envelope was a patchwork of colorful postage surrounding the ACBS mailing address. The stamps celebrate our past presidents, anniversaries of statehoods, the armed services, transportation, and range from the 1930s-1960s.  They were all vintage stamps! Four of the twenty stamps had boats on them, so we decided to look up their histories and share them with all of you. 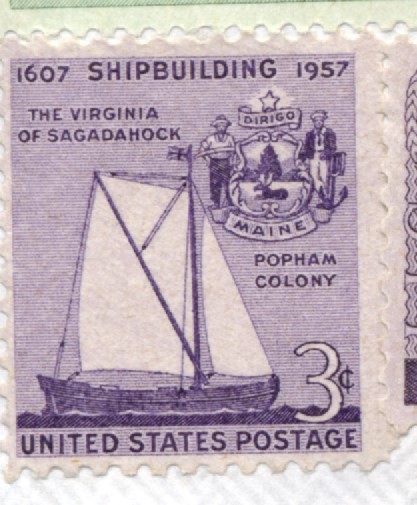 1957, 3¢ Stamp: Shipbuilding. Issued on August 15, 1957 in Bath, Maine, to celebrate the 350th anniversary of America’s commercial shipbuilding industry, and depicting Virginia of Sagadahock, the first American ship used in international trade which was built in Popham Colony, Maine, in 1607. Find out more about the history of this great stamp and early Maine shipbuilding at Mystic Stamp Company’s website https://www.mysticstamp.com/Products/United-States/1095/USA/. 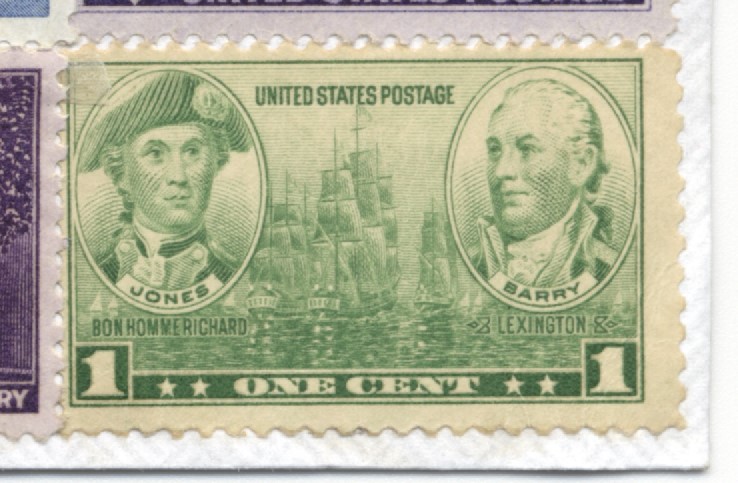 1936 1¢ Stamp: John Paul Jones and John Barry from the Army and Navy Series. Issued on December 15, 1936, in Washington, DC, this set of stamps was the idea of President Franklin Roosevelt and honors America’s early military heroes from the Army and Navy. The individual stamp on our ACBS envelope features two officers and ships from the Continental Navy. On the left is John Paul Jones, “The father of the American Navy,” and his ship Bonhomme Richard, which was built in 1765 as a merchant ship by the French East India Company and then given to the American Continental Navy by King Louis XVI of France. On the right is Naval officer John Barry and his ship, Lexington, an 86-foot brigantine purchased in the Dutch West Indies in 1776. Under Barry’s command the ship saw extensive action up and down the East Coast during the American Revolution.  (Find out more about this stamp at  https://www.mysticstamp.com/Products/United-States/790/USA/) 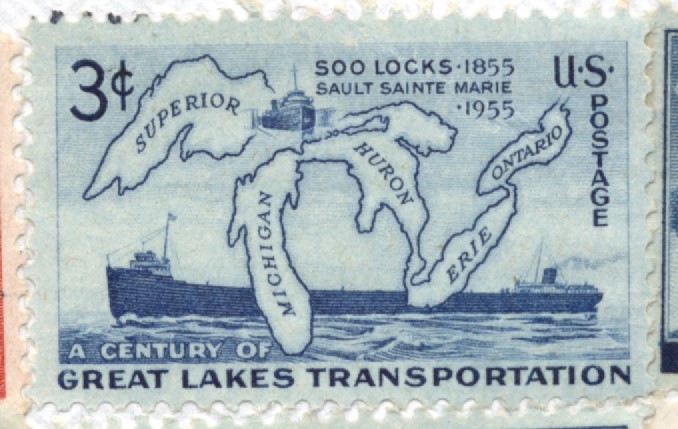 1955 3¢ Stamp: Soo Locks Centennial. Issued on June 28, 1955 in Sault St. Marie, Michigan, depicts a steamship in celebration of the 100 year anniversary of the opening of the Soo Locks in upper Michigan.  When the lock opened in 1855, they created an important commercial link for Lake Superior to the rest of the lower Great Lakes. Ships navigating the Great Lakes today follow the same path through the Soo locks. (Find out more about this stamp at  https://www.mysticstamp.com/Products/United-States/1069/USA/ ) 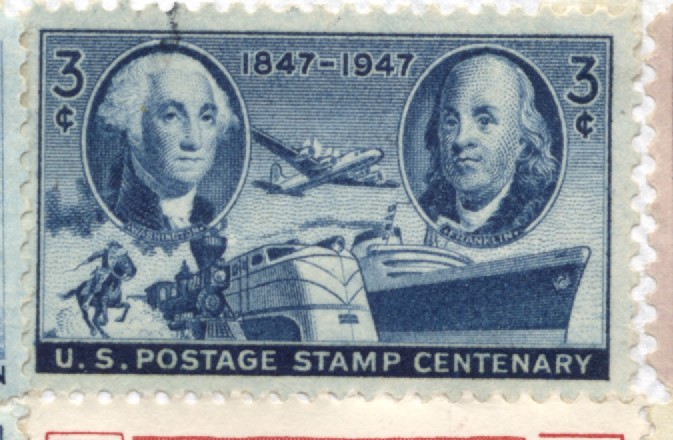 1947 3¢ Stamp: U.S. Stamp Centenary. Issued on May 17, 1947 in New York, New York in commemoration of 100th anniversary of the issuance of the first United States postage stamps. This stamp not only depicts Washington and Franklin, whose faces were also on the first US Stamps, but also all the ways in which the mail was transported over the first one hundred years. From pony express riders to modern steamships and airplanes. (Find out more about this stamp at  https://www.mysticstamp.com/Products/United-States/947/USA/)

We sincerely thank our ACBS member that sent us this history lesson today!