Bidding On A Good Time 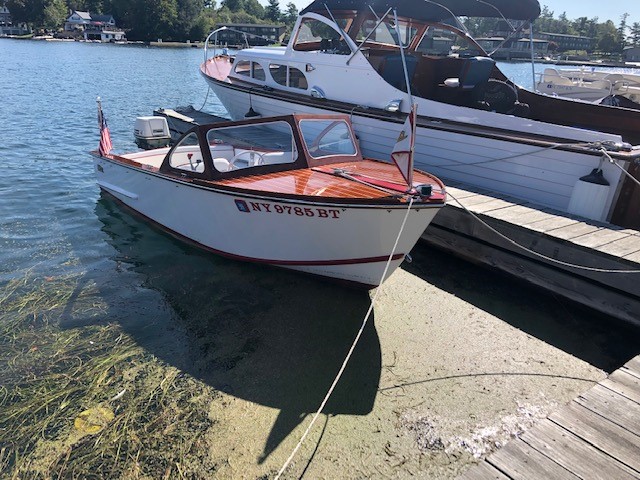 by Chris Almond member of the Long Island chapter

My 1966 Eltro 16 Runabout was restored over a 5 year period by our Long Island chapter of ACBS in the Frank F. Penney Boat Shop on the grounds of the Long Island Maritime museum. The boat was completed and launched for a test run in 2013.

Shortly after, our club chapter more or less disbanded as many members either moved away, sadly passed away or simply lost interest, leaving the boat in limbo, covered in a local boatyard. 5 years later, in 2018, a few new people joined ACBS and essentially re-formed our chapter and decided to do a closed-bid auction of the Eltro to chapter members. That is how it wound up in my hands.

I set about cleaning the boat up and completely re-staining, varnishing and painting it from top to bottom. New custom upholstery was made along with a full custom canvas cover. Modern steering system was installed for safety and reliability. This winter I set about building a new engine for the boats’ worn out 40hp Johnson outboard.

So far this boat has been to the 2019 international ACBS show in the 1000 islands, where she had the privilege of sharing the docks with the finest boats in the world.

She makes her home in the Great South Bay of Long Island where she was built nearly 60 years ago, making runs to famous Fire Island, restaurants, and to spend afternoons and evenings relaxing on the flats.