Big Sky was built in 1946, is 21 ft long, and powered by a Grey Marine Fireball 6 cylinder engine with 190 hp.  She is owned by Bob and Paula Boldt who are members of the Southwest Chapter of ACBS.  Big Sky was displayed at the 2016 ACBS International Boat Show at Lake Tahoe.

This is the history of Big Sky that was submitted with the registration of Big Sky with the Boldt’s ACBS membership:

Big Sky is a torpedo stern runabout built by Stanley Young at the Stan-Craft Boat Company of Polson, Montana in 1946. Originally named “77-II”, the boat was delivered to Alton Pearce in Kalispell on Flathead Lake in Montana. Purchased by Alan Furth in 1985 and renamed Big Sky, the boat was brought to Lake Tahoe where it was acquired by Bob and Paula Boldt, who have owned her since that time. Big Sky has been restored several times by Tony Brown on Lake Tahoe and by Syd Young, Stan Young’s son, at the Stan-Craft Boat Company, now in Coeur d’Alene, Idaho.

Big Sky was the second torpedo built by Stan Young, but is designated as hull #001. Stan was inspired by the Gold Cup racing boats of the early 1900’s that featured displacement hulls with a torpedo stern for hydrodynamic effect.  This design could be considered the ultimate “barrel-back” in that the tumble-home is not truncated at the transom as is the case with other more common barrel-back designs. The draw back is that Big Sky has many compound curves that are pleasing to the eye, but very difficult, and expensive, to build. The Pearce family paid more than $3,600 for Big Sky in 1946, a sum that could have purchased most of the houses in Kalispell at the time. As a result, there were only 6 original-style torpedoes built in total, of which 3 remain today. Big Sky is powered by a Gray Marine Fireball racing engine, topped with three carburetors, rated at 190 horse power.  With its sleel hydrodynamic design and powerful Fireball engine, Big Sky was one of the fastest boats on Flathead Lake for many years. 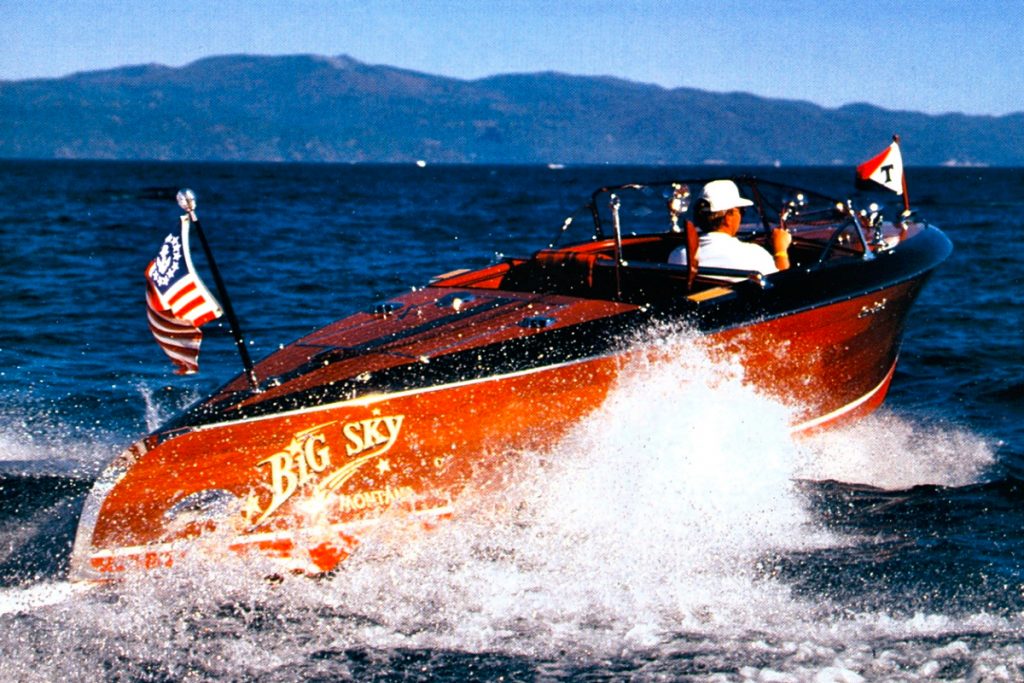