“Blame” It On My Mother 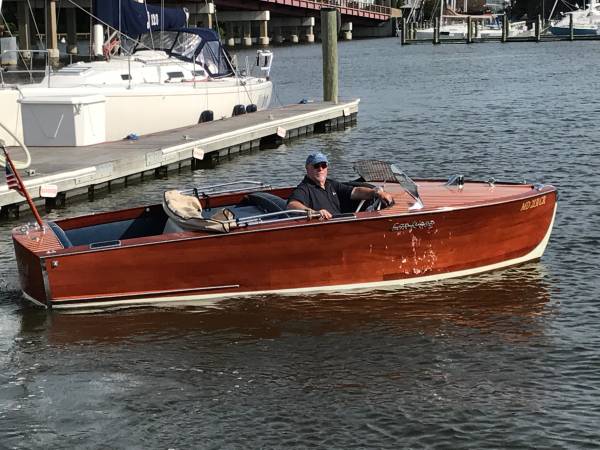 by Mark Kiefaber member of the Chesapeake Bay chapter

I have wanted a Gar Wood “speedboat” (that is how my mother always referred to them) since I was a little kid. I must have heard her story about her father’s Gar Wood more than 20 times. She was about sixteen years old (born in 1921) when she and her father took his Gar Wood sedan to the marina to gas it up. As she told it, my grandfather put the gas nozzle in the flag staff socket and put in a little gas before he realized his mistake. He quickly withdrew the nozzle and put in the gas fill not thinking about the gas in the bilge. When he was finished, he told my mother to start ‘er up. That’s when the explosion and fire started. My grandfather jumped overboard leaving my mother up front under the sedan roof. She raced past the fire and jumped overboard, too. The dockhand untied the burning boat and pushed it away from the dock. It burned to the waterline and sank.

Not deterred by this dangerous incident, my mother’s brother bought another Gar Wood at the 1940 National Motor Boat Show in New York City. Struck by the lines and power of the 1940 24-foot, 6-inch Gar Wood 198 Custom Utility with two 103 horsepower 6-cylinder engines, he put in his order and named the boat Florence after his mother (my grandmother). The name lasted for 40 years until a new owner decided to honor Vivien Leigh, star of the epic Civil War drama, and renamed the boat Leading Lady. This boat still exists and is featured on the cover of Tony Mollica’s book Gar Wood Boats.

So in 2014, it was my turn. I had been looking for a Gar Wood for a long time, and finally found just the right one for me, a 16’ 1947 Ensign utility with a 93 horsepower Chrysler Ace engine. She had been restored in Saranac Lake, NY in 1998 and lovingly cared for by an owner in South Carolina. I drove down there from my home in Annapolis, MD, bought her, and drove her home. I renamed her Miss Conduct. She is a little small for the Severn River when the wind blows up, so I take her out almost every morning with my cup of coffee for a 45-minute ride. I was even lucky enough to take my mother out for rides before she passed. She, of course told me about when her father blew up their Gar Wood.