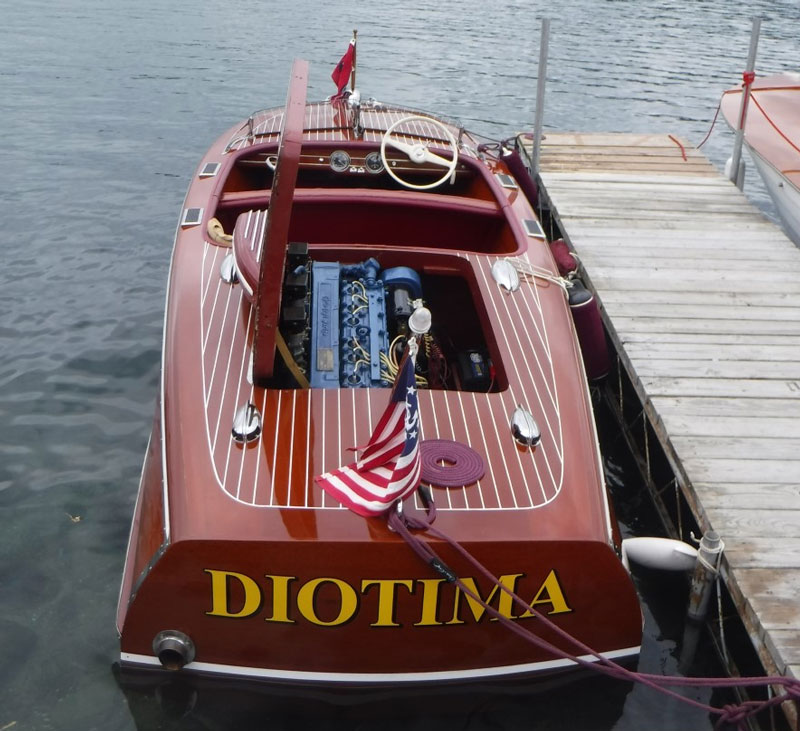 Thank you, Patti Bandy, for this great report and pictures.

The weather was absolutely beautiful all weekend. The 35th Annual Wine Country Classic Boat Show started with the Friday night reception under the tents at Depot Park.There were over 40 boats at the show which is the most in recent years. Blythe Jakubowski headed up the Hagerty Youth Judging which the kids love to do. They get hats and shirts and have their pads of paper and pencils and judge the boats. This year the boat they chose was Wood Too, owned by Arnie Rubenstein. 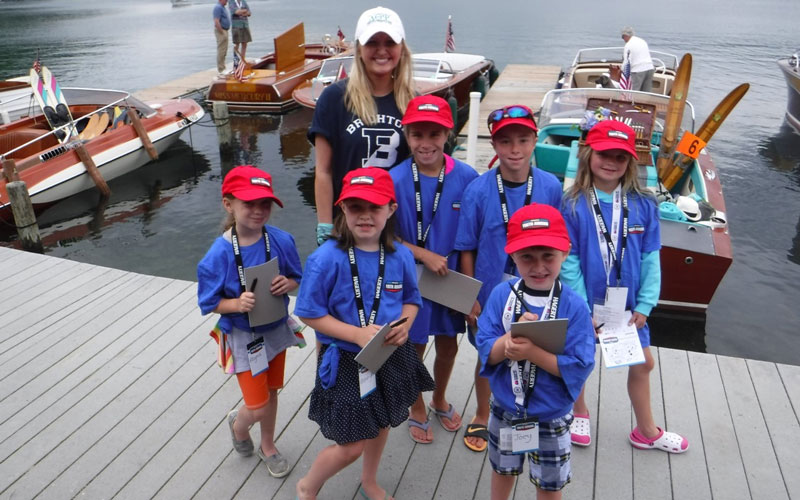 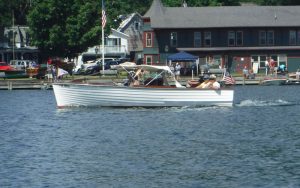 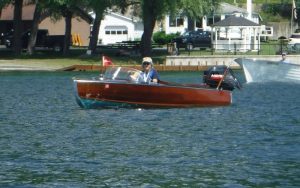 Saturday afternoon was a parade of boats. Sandy Heil who headed up the 50/50 raffle for the second year, received donations from many of the merchants in Hammondsport and a few of us made items to be raffled off. There were many happy winners for the 50/50.

Saturday night’s award banquet at the Glenn Curtiss Museum in Hammondsport was presided over by Jack Young, Commodore. John Howard, President of ACBS, talked about ACBS and all that is going on and future changes and events. 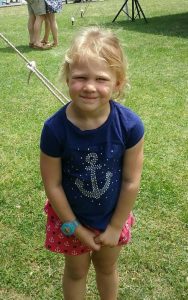 Sunday morning we had, for the first time, the Poker Run Regatta, which Terry Holland headed up. There were two heats. The first one was won by Chad Brenner with a poker hand that included two pairs. Chad ran his heat in a 2015 19 foot Vintage Craft. The second heat was won by Joe Rendemonti’s daughter, Mariella who is three. Her family had drawn a hand that included a pair of 4’s. Feeling the pressure, she purchased 3 additional cards, hoping to improve her hand. When she opened the envelopes she discovered an additional 4! This gave her 3 of a kind and the winning hand. Mariella rode in the second heat with her mom and dad in their 1960, 19 foot Lyman, Star of the Sea.

The show concluded with the chicken barbecue which was sponsored by the Boy Scouts of Hammondsport.

All in all, it was a great show and well received by all. Thank you to all of our volunteers and vendors who make the show so successful each year.

Pictured above is Diotima owned by Murray and Sarah Hestley.

Diotima was the 1948 Chris Craft 17′ Custom Runabout featured on the event’s program.  This is the story that is told about the boat and her name:

Our boat is Diotima, The namesake of a Greek philosopher. She appears in Plato’s work but we are uncertain if she were real or fictional. Nevertheless, she is reputed to have taught Socrates everything he knew about beauty and love. The philosophers of 400 BC were typically all men but Diotima’s teachings of love were so compelling that Socrates’ use of them enabled him to prevail in several debates. Humans see the beauty of a young body. As we grow, we begin to see beauty in all bodies and eventually in all souls. Beauty is everything and soon humans can see the beauty in laws and the structure of all things. No matter how insolent or foolish the “boys club” of the ancient Greece philosophers was to her, Diotima took none of their nonsense. She was a formidable teacher to all of them.

Built in 1948 in Algonac, Michigan. Sarah and Murray Hestley bought the boat in Grand Rapids, Michigan in 2006 and named her Diotima. She was restored by a Skaneateles Lake boatbuilder in 2010. A boatbuilder in Pittsburgh, Pennsylvania completed the woodwork, staining and varnishing the planking in 2013. The K engine was replaced with a rebuilt KBL, along with new exhaust; Diotima was brought to Keuka Lake in 2013. Currently she is maintained by a boatbuilder on Seneca Lake.