Boats in My Blood 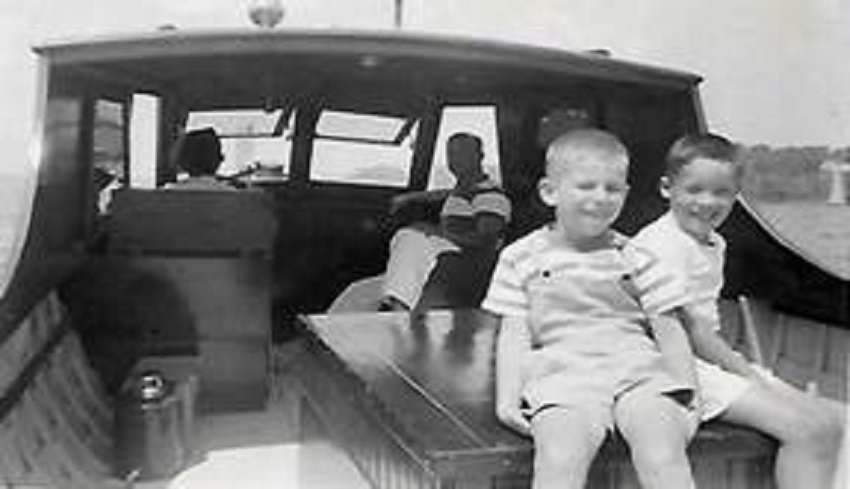 My parents grew up in Baltimore City, Dad, (Howard), went to Baltimore Polytechnic, and Mother, (Micky), Forrest Park High School. Due to the depression, their families were not well off.

Somehow in 1932, they were able to ride the WB&A train down to Camp Linstead, in Severna Park, where they met and spent a week crabbing, canoeing and swimming. They told me they swam all the way across Round Bay, to St Helina’s Island and back. They admired each other so much they fell in love. The good times led to buying a flat stern canoe with a Caille Red Head engine; they each chipped in $50.00. My father said the engine was junk and threw a rod; he got an Elto which allowed them to explore the entire Severn River.

When we looked at the pictures, years later, he said, You were too young to remember, when we had that one.

They dated, worked hard, saved money and married in `39. My father studied engineering at John’s Hopkins Night School, which led to a job at Edgewood Arsenal making munitions. During the War, sometimes, they had enough gas ration cards to go to Clayton’s Boat Yard and do some boating. After 5 years of 24 – 7 production, at Edgewood, in February of `45 they had produced sufficient volume to win the war in all six theaters. So they decided to have child. November of `45, my grandmother and great aunt were taking turns on the weekends so Howard and Micky could use their new, used boat, my father had found.

I remembered the Dodge, all varnish, nice cabin, with a head; my mother made a curtain out of a sheet.

My father took the spotlight off for repair; when it would rain, it would drip on me.

We always went somewhere, swam, and then had a picnic lunch.

So every year or so, dad would find a better used boat. The NONA was built in Maine, a lapstrake day boat with a cabin and bunks up forward, a Gray Marine 6, which took us on hundreds of outings with never a problem.

Then my mother’s father, Henry Rodgers, who taught Steam Engineering at Polytechnic, offered my father his 1929 American Car Foundry, 32ft Cruiser, so he could buy a 42 ft. Mathews, he found at Oxford, MD.

We kept the ACF, – Leda, at Sappington’s, it had an aft cabin with 2 bunks, a center cabinet and 3 portholes, but was still 90 degrees in there in the summer. We cruised all the coves and many rivers of the Western Shore; the Magothy, Severn, South, West River, Rhodes River and the Patapsco. My parents liked staying overnight in coves or going to Yacht Clubs for orchestra music, dinner and dancing. They left me with books to read and instructions to take care of myself. Sometimes I could hear my mother’s laughter above the music. They had great times.

After 5 years of boatyard fun and travel adventure, my folks decided they wanted a waterfront property. They had found the servant’s cottage of the Mathews Estate off of Benfield Road, in a small community, Lakeland, for $2,500.00. It was on a high hill overlooking the river, the bluff, another place where sand was dug for the Naval Academy.