Built For My Father 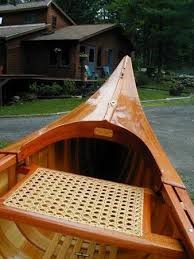 by Gerald Petersen member of the Blackhawk chapter

My 1912 Morris canoe was built for my father, Waldemar Petersen, when he was a youth living in Dundee, Illinois. My grandfather was a family physician living very near the Rock River in downtown Dundee. He had a large lot with a barn for his horses which he rode to call on patients, and it had more than ample room to store the canoe. My dad was a member of the American Canoe Association and took part in many of their activities and regularly canoed on the Rock River which was within walking distance from his home. After high school he entered Northwestern University in Evanston, Illinois and took his canoe with him to use on Lake Michigan (the campus runs along the lake shore just north of Chicago). He met my mother, Marion Thornton, at Northwestern and after they married in the 1920’s the canoe came to Lauderdale Lakes in SE Wisconsin, where the Thornton family had a summer home dating back to 1895. This is where the elegant Morris has resided to date.

I inherited the family cottage in the 1970’s and then acquired the adjacent Lauderdale property, restoring its two-slip wet boathouse where I now keep my 1934 and 1939 Gar Wood inboards. The below photo, from the 1930’s, shows my dad sailing the Morris on Lauderdale. He really enjoyed sailing, and inspired me to join the Lauderdale Lakes Sailing Club and sail competitively with a fleet of MC scows here on Lauderdale in the 1990’s. Lauderdale is just north of Lake Geneva, home to sailing legend and boat builder Buddy Melges.

Morris Canoes were originally built in Veazie Maine where Bert N. Morris lived and founded his business in 1891. Veazie Maine is on the Penobscot River north of Bangor, and south of Old Town. However, according to a computer search, one of his team, Walter D. Grant, moved to Waterville about 50 miles to the southeast on the Kennebec River in the early 1900’s and made a few Morris designed canoes there. Mine must have been built there per the Waterville notation on the decal in my Morris. Evidently, Grant went on, with George F. Terry, to found the Kennebec Boat and Canoe Company in Waterville. Most of the Morris canoes he built in Waterville were identical to those built in Veazie. Unfortunately, the Morris business in Veazie was destroyed by a fire in 1919 and never rebuilt.

Similar to Gar Wood’s wooden inboard boats built in the 1930’s, Morris put extra touches on his canoes such as lots of mahogany for large decks. My Morris is 16 feet long with 26-inch Mahogany decks fore and aft (from the point to the center of the back). I believe you could order even longer decks, which really made your canoe stand out. An 18 foot “Molitor” model was offered in the last few years of production with a 36-inch front deck! My Morris has a mast stay and length-wise wooden floor racks held together with cross pieces that fit between the ribs. For sailing, my father added a deeper keel. The original keel was white oak screwed into each of the steam bent ribs. He made a taller keel which was trimmed with a new brass strip and similarly attached. This avoided the need for side lee boards to keep on point when on a windward tack.

I took my two young sons on canoe camping trips in northern Wisconsin. One spot we loved was on Bass Lake within the Chequamegon National Forest. Bass Lake is connected to the much larger Lake Owen so fishing and paddling are available on both small and large waters. The picture to the below (left) shows the children in the 1970’s preparing to get aboard the Morris for a cruise on Lake Owen. I eventually purchased a fiberglass Old Town Canoe for camping & river trips, and the Morris was put into protected storage in my wood working shop. The lower photo to the right shows the Morris in my shop.