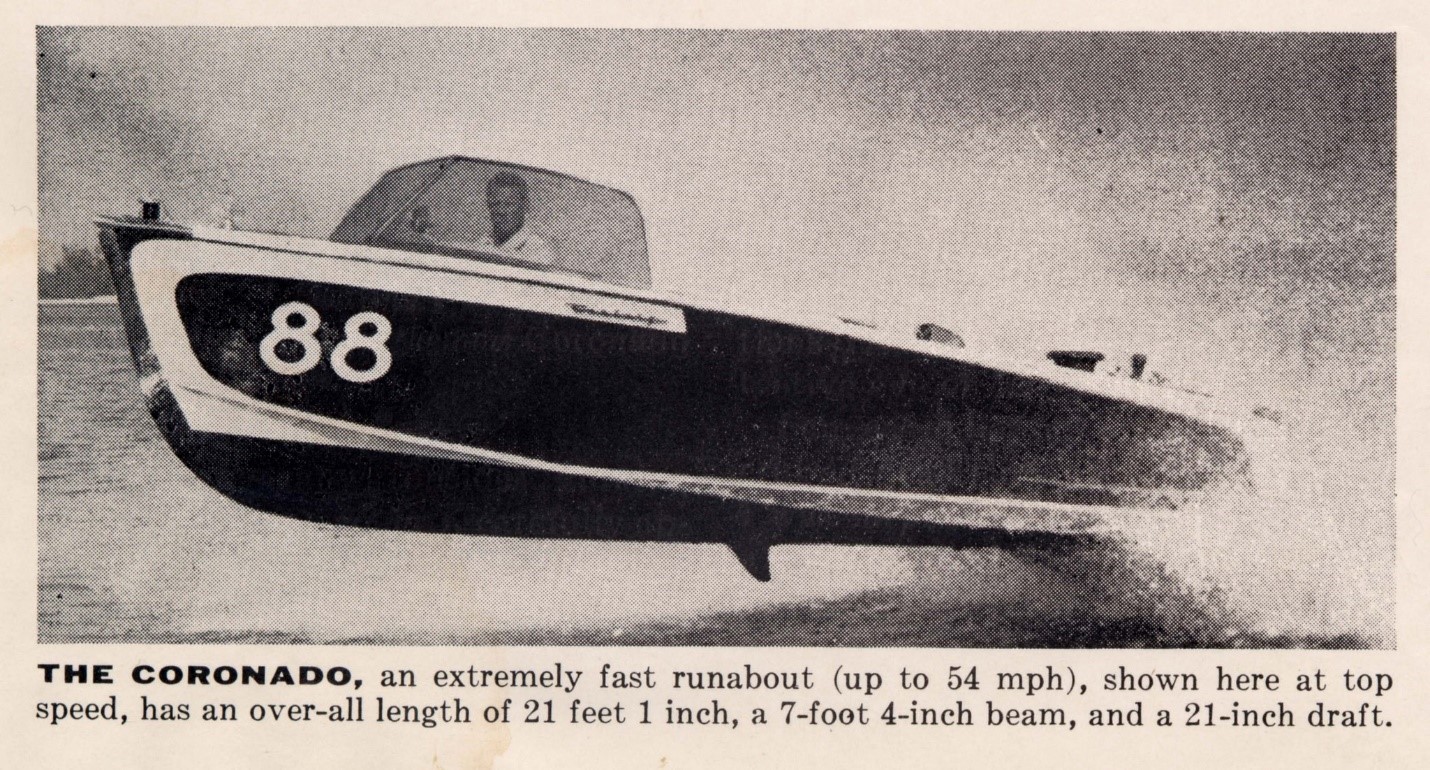 In the early to mid-1950’s the pleasure boating industry was rocked by the introduction of a light weight marine engine producing remarkable power. This engine was based on the 331 cu in Cadillac V8 and produced in racing trim 285hp. which made it the highest horsepowered gasoline engine available. It was Marketed and converted by Detroit Racing industries and sold thru Cal Connell Cadillac. Cadillac powered Century Coronado’s set multiple speed and endurance records. Initial versions were available as complete marine engines, or a kit was available to convert any 49 or newer 331 Cadillac V8. Power ranged from 250hp to the 285hp. mentioned above and consisted of 7 models available as a kit or assembled on a new Cadillac block. A characteristic of the engines was the vertical geared starter and generator contained in a housing on the flywheel end.

A second version of the Crusader appeared during the 57,58 model years. The vertical drive starter/generator had gone away and it is almost never found even on 1955 331 versions. A belt driven generator is listed in the 57/58 parts list. The oiling issues are generally solved on rebuild (331 &365). The flywheel forward and the common oil to both the engine and transmission continued. Displacement increased to 365cu in by increasing the cylinder bore to 4 inches. Power increased to 300 for the dual quad equipped engine. The hydraulic tappet camshaft was not listed leaving a choice of flat tappet or roller tappets. The three intake manifolds were unchanged.

The final version of the Cadillac Crusader was extensively revised; enough to describe it as a new engine. Displacement increased to 390cu in by increasing the stroke to 3.75 inches while maintaining the 4 inches bore of the previous model. More significant was the change from a flywheel forward configuration with the transmission sharing a common oil supply and driving from the “nose” of the crankshaft to a more modern flywheel aft configuration with a “velvet drive” hydraulic gear. This change reportedly corrected the failure mode of the previous models due to crankshaft failure and loss of oil pressure especially on hard acceleration.
Other changes and features included revised cylinder heads for better breathing and dual valve springs. Adjustable push rods were used with the clearance value provided on the name plate near the generator. The oiling system was revised and now included a spin on oil filter. The cooling system also received updates and the generator provided 15 amps at 600 rpm and was water cooled. Ignition points were set with the engine running thru a “window” in the distributor cap.
Models: models were defined as Mark no. which identified the horse power and carburetors configuration. Carburetor selection was unchanged. Information was on the name plate defining model no (Mark) rotation and compression.
The Mark 325 was 325hp at 5200 rpm and 397 ft lbs torque at 3600 Compression could be 8.5 or 10:1 requiring 100 octane fuel.