Cajun Teche – a Southwest Cruise into the Bayou 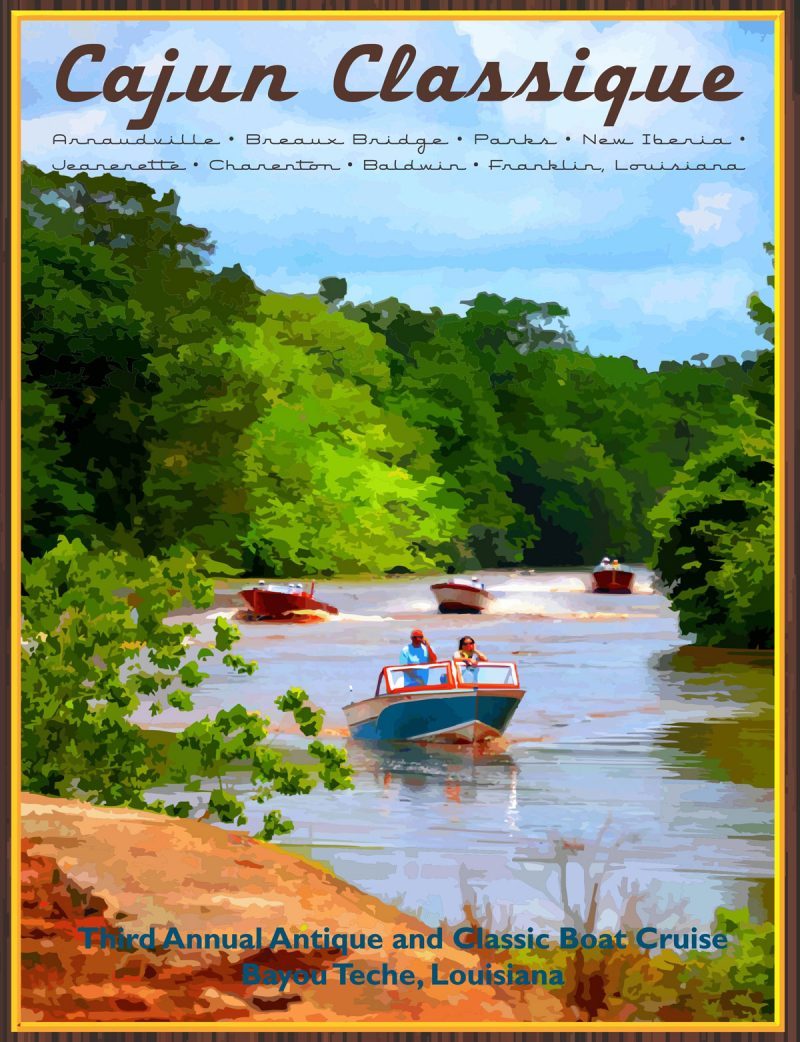 Welcome to Cajun Country! Come along in a classic boat to cruise upstream through the Bayou.

Enjoy this picture story of the Cajun Classique as the parade of vintage boats travels from Berwick, Louisiana to Arnaudville, Louisiana, roughly 115 miles.  This is the third annual Cajun Classique and is being held from April 3rd to 9th, 2017. Cajun Classique is sponsored by the Southwest Chapter of ACBS and the Bayou Teche Experience.

Boaters with boats in tow gathered in Berwick, Louisiana on Monday evening to be welcomed by the mayor and their first Cajun meal of the trip.  Doesn’t this look like a fun group!  Pictures from along the way are being sent by John Thompson, a member of the Heartland Classics Chapter.  He and wife Carolynn are avid river cruisers.

Boats in Tow line the streets of Berwick, Louisiana. 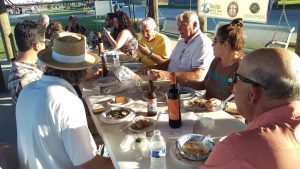 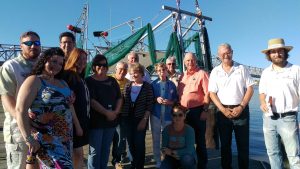 Opening evening of the Cajun Classique 2017

Tuesday morning was full of blue-sky and adventures to be had.  Starting off the day was a renaming ceremony, then cruising. 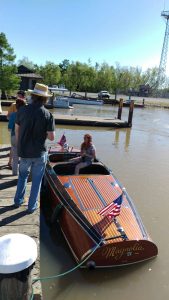 Wednesday’s stops include a tour of Metal Shark Franklin Yard and a visit to a private collection of classic boats.

Thursday’s pictures are in the phone/camera which is at the bottom of the Boyou Teche.

May be some fill in later. 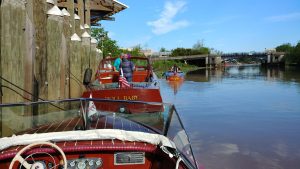 Ready for day 5 on the Bayou Teche with Classic Boats. 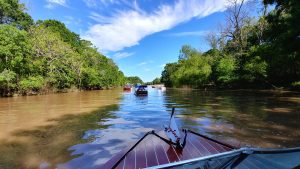 Friday of the Cajun Classique on the Bayou Teche.

Friday evening after a “swamp tour” …ahhh, the paint brush of mother nature. 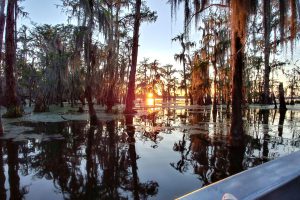 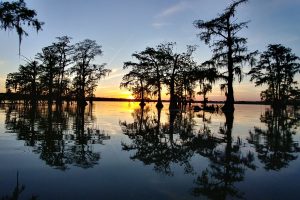 Two more pictures from the trip: 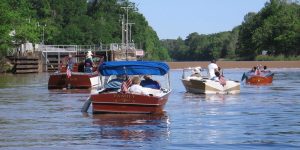 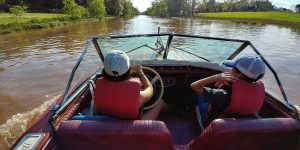 the kids driving the Higgins—ages 13 and 9 as I recall, getting their first ride in a wooden boat and a chance to pilot it on the Teche as well, albeit at a slow speed as there is not much room for error in the tight channel. The night before these two provided music at dinner. She plays the fiddle and he the guitar. They live on the Teche.

Once more, thanks to John Thompson for the pictorial story.  In addition to the pictures, here is the review of the journey submitted by John Thompson:

A dozen or so miles upriver from where the Atchafalaya River spills into Gulf of Mexico the third running of the Cajun Classique would get underway with a welcome reception featuring home cooked Cajun cuisine on April 2nd.

Sponsored by the Southwest Chapter of ACBS and the Bayou Teche Experience, six boats with crew members from six states would launch the next day from the municipal harbor at Berwick, Louisiana.  It would be as much a cultural immersion into the Cajun culture and life in Acadiana (Ah-cade-ee-an-ah) as it was a cruise.

Our “admirals” and cruise directors were Cory Werk, Conni Castille and Dr. Wayne and Doll Elliott.  They began our introduction to this land and water by explaining that a bayou was a slow-moving river and a swamp was a flooded forest. We would enjoy both before the week-long event concluded.   Fortunately, our swamp tour would not be done in our classic boats.

Bayou Teche is scenic with its brown stained water collared by towering green Live Oak and Cyprus trees accented by flowering bushes in a rainbow of colors.  “Teche”, pronounced “tesh”, comes from a Native-American word meaning snake.  The bayou’s many curves which surely contributed to its naming also mean even when windy the waters are smooth and perfect for cruising.

Our water journey began with a quick tour of the Berwick working waterfront on the Atchafalaya and then we headed a few hundred yards upriver to the lock that would raise us one foot to the beginning of the Bayou Teche and the first sighting of an alligator warily watching our progress up the Bayou.

Along the one hundred or so miles on the narrow waterway we would tour the Cyprus Sawmill Museum, enjoy a locally produced film documenting the building of bayou boats by local craftsman, tour and have lunch on the patio of Oaklawn Manor, an antebellum plantation home, and be welcomed there by its present owner who is a former two term governor of Louisiana, tour a local collection of handmade boats, motor by a modern builder of aluminum boats for the military and commercial concerns, have gumbo served from bayou side architectural offices, visit a working rice mill, tour the factory where Tabasco sauce is made and the adjoining Jungle Gardens, partake of beverages on the balcony of the historic Gouguenheim Hotel as we were treated to an Etouffe cooking demonstration, survive a sunset tour of an stunningly beautiful swamp full of alligators and birds, then be entertained by local musicians as we dined on more Cajun cuisine.  The final full day would begin with pastries and drinks at a Zydeco Breakfast with many locals dancing, then movedto antique store shopping before stopping by a  down town café Cajun Jam, lunch at a Cajun cook off at Conni’s family’s reunion,  then a tour and tasting at a local beer brewery, followed by a crawfish boil on the banks of the Bayou Teche before closing the week with an evening of dancing at La Poussiere, the oldest dance hall in Acadiana.

We have run many rivers, but this was our first bayou.  We chose our 18’ 1961 Higgins Mandalay for this trip since it was only about seventy miles from where it was built in New Orleans.  We joined a 1940 Chris Craft, a 1962 Chris Craft, a 1959 Thompson, a 1960 Higgins and a wooden modern classic picnic launch.

At almost every picturesque small town where we docked or nudged our boats into the soft river bank we were greeted by the local mayor and our boats were guarded while we were away from them by the local police.

The Cajuns displayed a zest for life and a welcome smile greeting us as if old friends.  This close partnering of an ACBS Chapter and the local tourism and civic officials seems to be worth replicating on other waters where we play with our classic boats.  This event is not so much about running this waterway, as it is experiencing its nature, culture and history.  The Cajun Classique would wisely be placed on every intrepid boater’s bucket list.