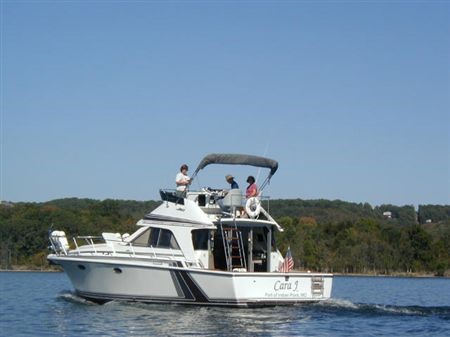 by Dick & Cara Moist members of the Heartland Classics chapter

My wife Cara and I bought our first cruiser Fifty one years ago. It was a 25′ Owen’s cruiser. We had it for just one year, but with a 3 year old and another on the way 25′ was just a little tight. Cara’s last days on the Owen’s she could not turn around in the cabin. This was in the fall.

During the summer of that year there was a 1967 31′ Trojan Cruiser that was not being used and went on the market in September, We cut a deal with the owner (the bank) and now we have two cruisers. The next spring we put the Owen’s up for sell. Did not take too long and we are down to just one boat. And now we are four people. We fit very well in the 31 footer.

Eight years later we were on a family vacation and spent a day on Mackinac Island. There was a 1977 Trojan F32 Sedan Cruiser. We visited with the owners and were able to see in the boat. When returned home we called that local Trojan dealer who was located on The Lake of the Ozarks in Missouri, and he had one in stock! With one phone call the 31′ Trojan was sold. This is August of 1977 and we moved into a 1977 32′ Trojan Sedan Cruiser. It was a foot longer and a foot wider and it felt twice as big.

Looking at boat ads we found a Trojan 10 meter Sedan Cruiser. We went to the harbor where the boat was located and checked it out. Liked what we saw with two exceptions, Salt water boat and no shower. And it was under contract. Upon returning to Springfield we contacted a broker to sell our Trojan 32. Told the broker what we where looking for and guess what, he knew of one in St. Charles, MO on the Mississippi River. We cut a deal contingent on selling our boat. That took a couple months. So on August 17th our “new” boat was on the road to Table Rock Lake. On our 34th Wedding Anniversary,August 18 2000 she was in her new home at The Ozarks Yacht Club dock on Table Rock Lake in Missouri. We are the fourth owner. She came to us in good condition with only minor issues to begin cruising. One issue was the furniture in the cabin, not very nautical or comfortable. Could not even give it away!

The boat is powered by two big block GM engines. Has an Onan 6.5KW generator, and two air conditioners. She carries 350 gal. of fuel and 100 gal of water. Has a vacu-flush head with a 40 gal holding tank. In the beginning we cruised and did repairs as needed. The extra room, walk-in shower, walk around bed in the master state room was a real treat.

For all of the years that we have boated on Table Rock Lake we have de-winterized around March 19, my birthday. Not much traffic on the lake before Memorial Day. Good time to do projects. There is always a project, either fixing or up grading.

Always thinking of some way to modernize the boat. One project was to design and build a fly by wire system for the throttle control. Old cables get stiff!
The Cara J. operated as a shuttle for our Saturday evening dinner put on as part of the Cruising Weekend sponsored by the Heartland Chapter ACBS. Great fun, boat ride, dinner, and another boat ride.

More recently we have modernized the head, galley, and lighting. In the head we have replace the little round sink, with an above counter glass bowl sink. The galley has an induction cook top. We have had the cook top for while, before they became popular. The lighting is all LED. We have switches on locker doors that turn on a light when the door is opened. The biggest and most recent change was to remove the carpet on the galley/head/state room level and replaced it with Teak and Holly.

The things that drew us to the Trojan 11M Sedan cruiser are first the size. Second and high of the list is a separate shower. Third, a full state room with queen size bed. Fourth, a nice galley with good storage. And last of primary reasons to select the 11M is that there is no wood below the water line. Main stringers are layered up fiberglass with no wood core. We have no plans to change boats in the future.