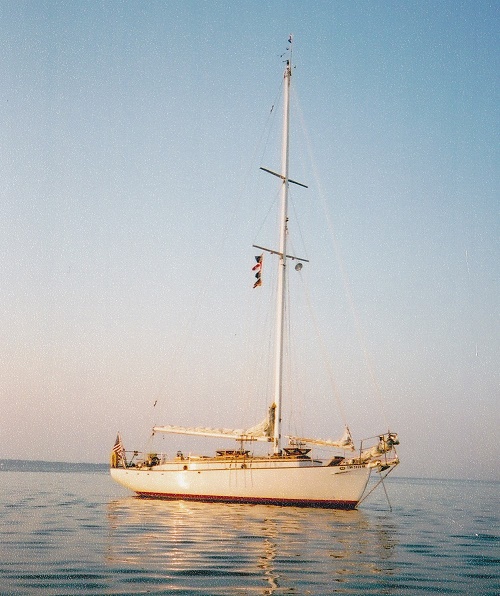 by Douglas Hansen member of ACBS

Escapee, my “built strong for the Southern Ocean” sailboat for the past 38 years, is far from home and those waters. In 1940, she was commissioned in Sydney, Australia by Henry M.T. Lehmann (more on Henry later). Two years later she was re-registered in Vancouver, BC. In 1946 Henry sold her and for the next 26 years she sailed under 5 Canadian owners, the last of note (Viv and Raith Sykes were well known Pacific Ocean cruisers for 10 years). So, when Escapee next finds herself in the Pacific she will no doubt know where to go. In 1972 Escapee was purchased by New Zealanders who sailed in southern Pacific waters then to Malta through the newly reopened Suez Canal. There she changed hands in 1975 to a German couple who sailed her in Mediterranean and Atlantic waters. I purchased Escapee from them in 1981 and brought her to the Chesapeake Bay where she has lived and provided much enjoyment since, interrupted only by restoration projects. Alas, Escapee is looking for a new home as her owner is aging faster than she is.

In 1981, Escapee was fully found with what was likely all her original wood and fasteners, due in great part to the quality of her original materials and excellent marine construction techniques. In fact, her then marine surveyor said numerous times that “she is built like a tank”. Thank goodness she doesn’t sail that way! She is constructed of Australian Spotted Gum below the water line and for her structural members. New Zealand Kauri was used for her topsides, house and interior. Her decks are teak. Her hull and structural members are copper riveted. So, what needed restoration? Her “horizontal” wood (cabin top, decks, cockpit and interior cabin sole). One contributing factor was the effects of 45 years of continuous use, much of that blue-water sailing. The other was diminished construction techniques and the use of mild steel fasteners on the cabin top and in the cockpit (did WWII bronze restrictions get in the way?). Here-in lies one her mysteries and brings me back to Henry Lehmann who is listed on the original documentation as the designer and builder. My marine restoration specialist believes that there is no way her hull, decks and house were built by day labor. But it is possible that Henry completed the rest by himself. My internet searches on Henry M.T. Lehmann show that he was a man of many talents – a British Army officer, a WWI fighter pilot, an air force adviser to the Chinese Nationalists, a member of the Royal Canadian Air Force and a commercial pilot – but no indication of an ability to design and build a classic blue-water sailboat. Alas this is likely to remain a mystery. Finally, other below deck “restorations” have been accomplished to improve her interior configuration and she received a new diesel engine recently. This coming May Escapee will turn 80 but she is destined to continue making history.