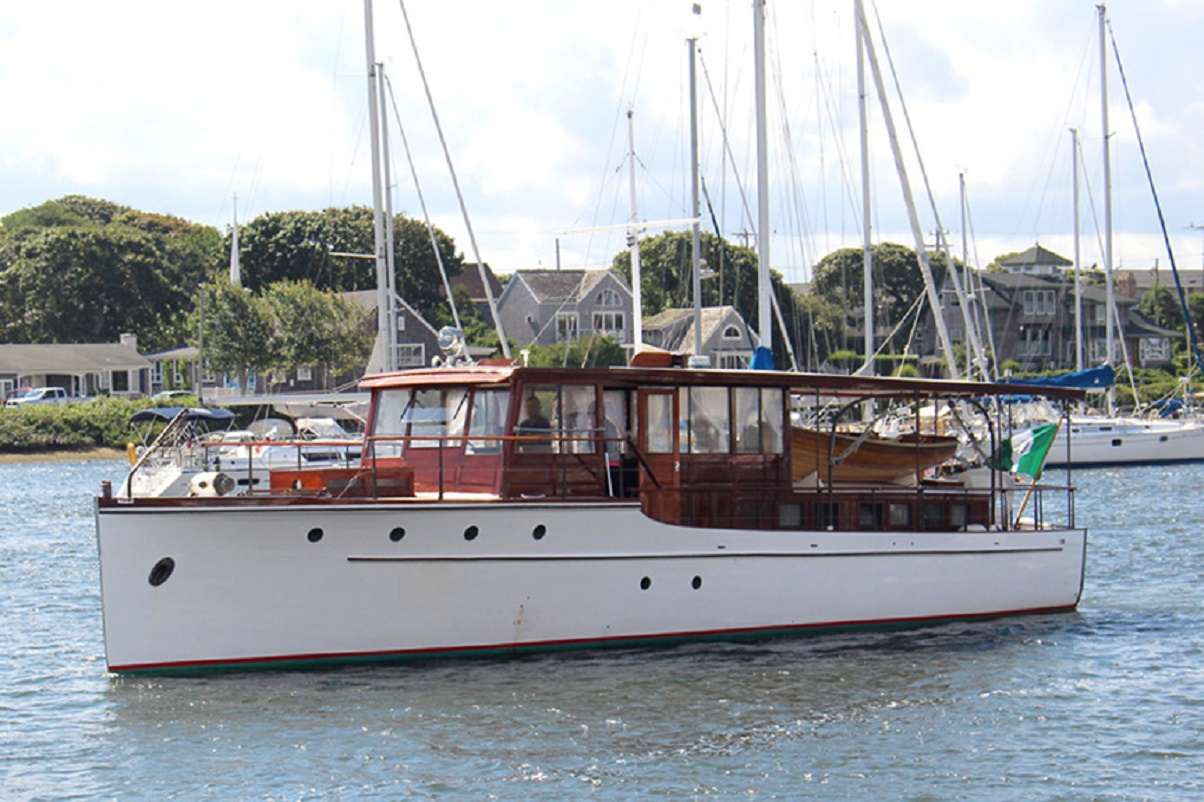 by Chris Ogilvy member of the New England chapter

Elco first appeared at the World’s Columbian Exhibition in 1893, Chicago, where they produced the 36′ launches that carried the fair visitors. They later built a vast boat yard in Bayonne, N.J. to meet the increasing needs of the growing boating community.

Cheerio was one of seven 50′ Elco flat tops built in 1929. It was the largest of the Elco fleet ranging from 26′ to 50′, all standard design with very few modifications available. She was delivered to St Louis mid 1929, prior to the stock market crash. Her life there was short, returning to the northeast the following year.

During World War II, like many private yachts, the vessel was painted grey and aided the US Coast Guard in patrolling Long Island Sound looking for German U boats.

After the war, her home port was Portland, CT and the name had been changed to Proteus.

In 1989, Proteus was purchased by Rick and Cathy Baker. At that time she underwent a major restoration including structural, new electrical and eventually new diesel twin engines.

Proteus became the center for summer family trips and business entertainment. Numerous trips were made to Boston, New York, and the Hudson Valley. In 1995, along with three other classic yachts, a month long trip to Montreal was planned. While in the Ottawa River a submerged object was hit and the vessel sank within ten minutes. Proteus was raised and spent the winter in a shipyard north of Montreal. Half the keel and bottom were replaced. She returned to her home port of Chester, CT the next summer. She continued to to be family entertainment with annual appearances at the Mystic Antique Boat Rendezvous and other regional shows. Rick Baker treated Proteus like one of his own children. He did most of the maintenance himself spending most of his summer weekends puttering and working on the boat at Chrisholm boat marina in Chester, CT. The decision to sell the boat was difficult but it seemed to be the right time.

In 2015 I bought Proteus. The boat was renamed ‘Cheerio’ (after a grandfather’s very similar yacht) and spent summers in Falmouth, MA. My brother, Stephen H. Ogilvy, Jr. lives in Falmouth and also has a 27′ Lyman wooden boat in the harbor and co-directs the work and activities on Cheerio. The two boats are some of the only wooden boats in the entire harbor. For 2 years Cheerio was brought back to Connecticut for the winters but now is kept in Mattapoisett in the winter and Falmouth in the summer. In 2015 the 10′ bright work dingy was totally rebuilt. The boat is now 90 years old and last year, a 24 volt bow and stern thruster system was installed to modernize the boat to accommodate current ports and docking.