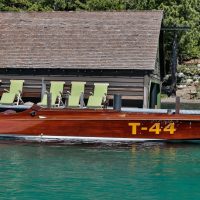 Click to enlarge image.
Contact Information
Contact Mac Scott
530-546-2551 Ext. 8
Carnelian Bay, CA, US
Visit Website
$225,000
More Information
The concept behind the creation of this boat was developed by Ken Bassett of Onion River Boatworks in Vermont and Tony Brown of Western Runabouts in California. They used the design of a 1920s-era Hacker-Craft named “Nick-Nack” as a basic blueprint – but many modifications needed to be made to accommodate the new engine and handle the power it develops. The idea was to put a Rolls-Royce Meteor V12 tank engine into a speed boat. The interior is upholstered from maroon leather and there’s a forward jump seat that is said to be for “brave passengers”! T-44 is a one owner 33' gentleman’s racer that has been meticulously maintained and comes on a custom-configured trailer for easy transport.
AdSense code
This Ad has been viewed 62 times.