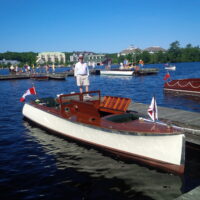 OLLAG
1923, 27’ Long-Deck Matheson Launch
Originally built in Port Carling, Ontario, OLLAG is in great condition. The boat was last restored in 2006 and the engine in 2011. This is a rare offering as Matheson hand built only one launch per year, and only about a dozen were ever made.
The winner of many boat show awards including Lake Tahoe Concours d’Elegance in 2004 and 2006, OLLAG has been boathouse stored since 1974 and is only in the water when being used. The 1923 Scripps F4 with 81 HP starts and runs like a top. Current owner has amassed significant history and useful information about the boat and motor. Located in Lake Muskoka Ontario Canada
Asking $75,000 USD. Contact Stuart Angus 647-401-8140, [email protected]

AdSense code
This Ad has been viewed 360 times.