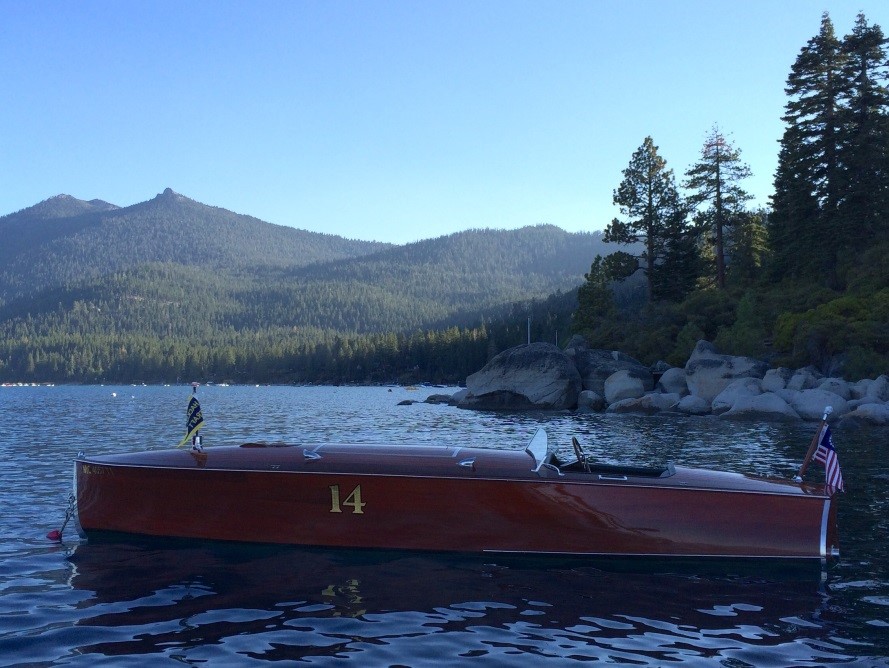 In 9 days, some very unique boats will gather at Carnelian Bay on Lake Tahoe.

Well, the short story is that the boat is definitely unique in that it is a replica of a Hacker Gentleman’s Speedster that never really existed.

Longer story: The boat was built in 2015 by Bruce Hutchinson of Gull Lake, Michigan. I wanted Bruce to build a speedster type boat, but in his opinion, the Gar Wood speedster had the cockpit too far back and didn’t look just right.   The hull Bruce was familiar with and thought would work well as a speedster was the hull designed by Hacker in 1923 as a gentleman’s runabout or racer.  He played with the deck and cockpit configuration and came up with the Hacker speedster. The cockpit is large and provides better visibility and has lots of leg room for today’s larger-framed gentlemen.

In Bruce’s own words, “I’ve built 5 Hacker designed boats,and in my heart of hearts feel that if he ever designed a “speedster” ( which I’m not aware of and could be wrong ) Double  Down would be close to the result. Net, you’ve got the only Hacker Speedster replica of a boat that never originally existed.  The boat is certainly worthy of show entry but the judging committee may have trouble classifying its judging category. I’d be up front with them and ask for their help. I think it would qualify as a contemporary classic for sure but it’s really a ‘conceptual’ replica.”