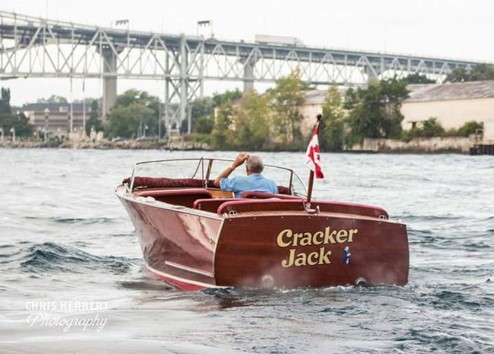 by member Jack Warren member of the Michigan and Toronto chapters

CrackerJack is a 1947 22′ Sportsman, usually called a U-22. They are great boats and I can see why Chris-Craft made more of these than any other model. I previously owned a 1950 17′ Deluxe Runabout. It was a great boat too but a little too small. It is like the sportscar whereas the U-22 is like the station wagon. Maybe not so pretty but so versatile!

I had been looking for a U-22 and it turned out that there was one for sale not 10 miles away. I guess it was meant to be. I went over to have a look at it and the rest is history.

The boat was in pretty rough shape and being a 1947, it was produced when Chris Craft had difficulty finding enough Mahogany so satisfy their production requirements. It had Cedar sides painted white. I knew that I was faced with a total rebuild so I decided to replace the cedar with mahogany.

I am fortunate to have a heated shop beside the house where I can pull the boat in and work on it in comfort. This would be the third boat that I worked on. The first was a scratch build 19′ barrelback runabout from a Ken Hankinson plan and the second was a complete rebuild of the 17′ Deluxe.

I completely replaced the bottom and engine stringers using the 5200 method detailed in Don Danenburg’s book. Most of the side frames, the bottom, engine stringers and all of the topside planking was replaced with new wood. As well, all of the transom framing and planking was replaced. New deck beams and decking were installed. In reality, about the only wood that could be salvaged was a few of the side frames and the interior ceiling boards. They were painted white when I got the boat but I found that they were blond coloured and were made out of spruce. The spruce was quartersawn in such a way that looking at the end of the board, the grain lines were vertical. This gave these boards a unique look and certainly made it worthwhile to spend the time stripping all of that white paint.

The boat came with a K engine, 95hp. I felt that a little more zip was required. I came upon a Chris Craft 283 that had been sitting outside for years. The engine was seized. I bought a rebuilt GM 350 and cleaned up the rest of the parts on the 283 and installed that in the boat. With that power the boat moves great no matter how many persons are in the boat.

It took 3 years and a lot of elbow grease to get the job done. CrackerJack was launched in 2012 and since that time we have logged about 250 hours on the engine. We have attended our Chapter boat shows in Algonac, St Clair, Port Huron and Port Sanilac. In addition, we have trailered to International Boat Shows in the Finger Lakes, Branson Missouri, Minnesota, Wisconsin and of course the show our Chapter sponsored in Port Huron in 2018. We’ve also done cruises in Muskoka, the Thousand Islands and the Rideau Canal.