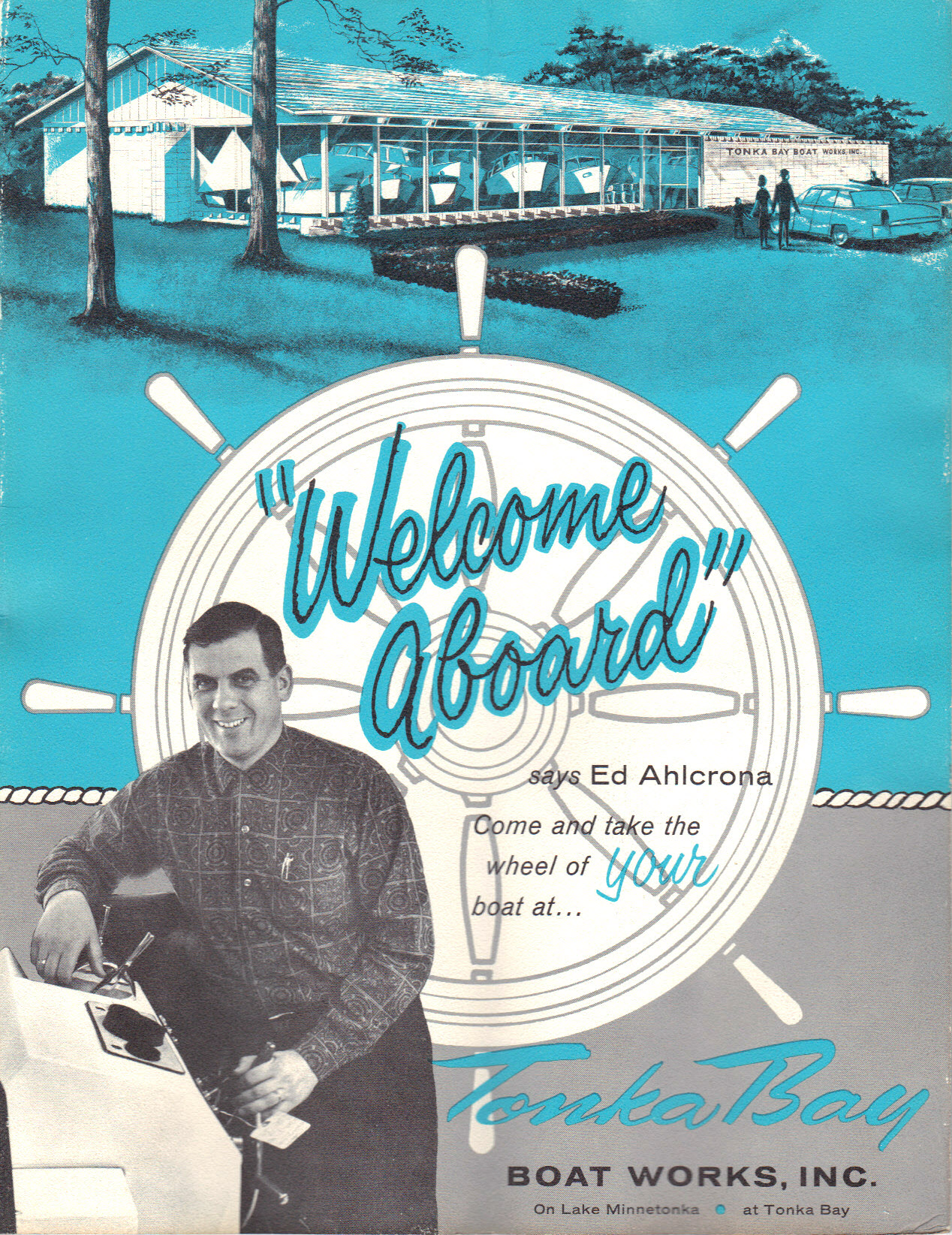 My father, Edgar Ahlcrona, owned Tonka Bay Boat Works in Tonka Bay, Minnesota, from 1947 through 1972. They manufactured Crona Crafts and marketed these runabouts as the new style trend in the mid 50’s.

Boating for my father and his brothers (Robert, Richard and Bertil) began at a young age. They had an idea while they were in their teens that you could build a boat by floating it on oil drums. The boat they built was launched on Lake Harriet and caught the attention of the Minneapolis Journal in an article the summer of 1939. It is too bad they didn’t pursue this idea and they may have been credited with being the first maker of a pontoon boat!

After World War II, my father and his brothers, enrolled at the University of Minnesota. Shortly after enrolling, Tonka Bay Boat Works became available for sale, and the brothers decided to drop their college plans and pursue their boating passion. They purchased Tonka Bay Boat Works in 1947. My father gradually bought out all of his brother’s shares in the business and became the sole owner/president until 1972.

The business grew and Owens Cruisers and Century Runabouts became the beautiful new boats for sale. The marina also became a full service maintenance, repair, winter storage, and summer dockage business. After deciding to sell the marina, my father was tragically killed in an automobile accident on his way to a boat show in Illinois in 1974. I don’t remember my father talking about the short-lived venture into boat manufacturing and I didn’t know much more about Crona Crafts.

In the summer of 1997, we purchased a cabin on Lake Mille Lacs from my father’s brother, Richard. On the property he had saved an original Crona Craft, which he had planned to restore. When we moved the boat out of the woods and uncovered it, we were so disappointed to see its deteriorated condition. I knew its restoration was beyond our capabilities.

I went on a self-declared mission to see if I could locate any other 14 foot Crona Crafts. My father’s last surviving brother, Robert, did not know how many Crona Crafts had been manufactured.

My brother-in-law decided he would tackle the original Crona Craft. That fall, another Crona Craft appeared on Craig’s List. In 3 months, we had located another boat. Between these 3 boats, we hope to have 2 restored boats, using parts from the first boat. I haven’t tried to find any more Crona Crafts – we are out of garage space!

I think my father would be surprised and proud that I have “Taken the wheel of OUR boat! Welcome Aboard”