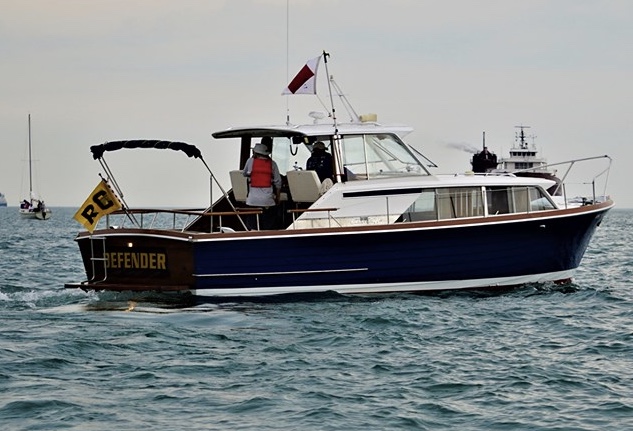 It’s a Long Tale. Hang in There

In the early ‘60s, the Detroit River Yachting Association, now the Detroit Regional Yachting Association was, and is the parent organization for Detroit area yacht clubs that wish to hold sail racing events. Each club (9 if I remember correctly) was invited to hold a DRYA/Host club run racing regatta. With few exceptions, the regattas were always held on Saturday. As I remember the weekend regattas routinely drew 200 – 300 boats.

The races, held on Michigan’s Lake St. Clair, were divided in to 2 separate race courses based mostly on size. The 2 courses were each built on a circular radius, and defined by only their center points, to make a windward start easier to accomplish as to the true wind direction. The turning marks were then established at the proper points around the periphery of the circle on race day. Big boats (up to 75’) on the longer “A” course, and the smaller one designs on the “C” course.

In 1963, my father, C. Dale Nouse (who would later become Commodore) and I joined the Grosse Pointe Sail Club. The GPSC was then, as now, operating their wildly popular Tuesday night sailboat races.

Dad had a heavy ketch rigged Mariner 32 at that time. Gorgeous boat, but couldn’t get out of its own way unless it was blowing 25 mph. Not an exactly a racing boat. Searching for a role that a “kid”, I was maybe 13, could fulfill, I approached GPSC Past Commodore Bill Connolly (1960) (lots more about Bill if you’re interested) and asked how I could help with the club’s activities. Commodore Connolly had two words, “Jay Deeds”.

I followed Bill’s advise, contacted Jay, and was accepted by Jay as his intern in 1963. I rode with Jay on his beloved Lyman learning to properly and accurately lay marks and prohibited zones for sailboat races. I learned an enormous amount from both Jay and Commodore Connolly.

Jay was setting the marks for the windward, turning marks, prohibited box, and finishing line for both the DRYA Course Saturday regatta on the C course, as well as the GPSC Tuesday night series. WAY different layouts than now.

Hang in there, we’ll get to the boat eventually.

There was a counterpoint to our activities up on the “A” Course (Big boats) performing the same tasks only over longer distances. In 1965, that individual decided that they didn’t, or couldn’t continue that function.

Mike Tappert, a GPSC member, and local dentist, offered the use of his boat as support for the A Course. Mike didn’t have time to actually run the boat, but would make it available for the DRYA to use on Saturdays. We’ll get back to Mike in a bit.

Memory fails me. I don’t remember who approached me, but I was offered the opportunity to take over as mark set/safety patrol for the big boat A Course. Commodore Connolly had become a second sailing father and mentor to me by this time. I felt his gentle hand guiding me along as was Commodore Deeds. I jumped at the chance.

Her name was Defender. She was a dark blue hull with all white topsides, and as a sailor, was the most gorgeous powerboat I’d ever seen. She instantly became MY baby. Don’t think Mike ever needed to clean her up after that.

Defender I and had a ball each and every Saturday. Over the next 4 years, we did the Saturday regattas on the A course, rode with Jay on Tuesday nights, and when Commodore Deeds was out of town doing the Canada Cup races, we handled the Raven World Championships, the Thistle Nationals, a spectacular GPSC One Design Regatta, and Safety/Chase for a couple of Port Huron to Mackinaw races. Most days were great, occasionally I had to ask Defender to do the impossible. Like 60 mph winds, the occasional thunderstorms, once a suspected heart attack victim taken dead upwind from the course to the Grosse Pointe City pier to meet an ambulance, and return to the race course. The patient’s name was Dick. Hopefully he remembers us well. And a couple of sinking boats to pick up survivors and debris. Defender and I never failed each other.

All good things must eventually come to an end. In the early 70s, my profession took me away from the Grosse Pointe area for the next 40+ years. My retirement in 2015 opened new opportunities. My wife’s involvement in IT, and the nature of my profession left us with few close friends. We started a search for a retirement location. Tracey’s heritage is English and has no family here, so we decided to return to the Detroit area, eventually settling in the Waterford area (had some family here). Skipping along a bit, I rejoined the Grosse Pointe Sail Club, and started a search for a boat to put on Lake St Clair.

I wanted a Sea Skiff open utility with twin engines. I found a 28’ in Wisconsin, and had it surveyed. The survey didn’t look too good, so I located a wooden boat specialist here in Michigan and took the survey to him for his opinion.

Dan Gibney from Craftworks Marine opined that the boat wasn’t worth 1/2 the asking price. Nuff said. On the way out of Dan’s yard, I walked by a shrink wrapped boat with twin engines and a strangely familiar transom shape. I went back to his office and learned it was a 32-foot 1964 Chris Craft Sea Skiff Corinthian. The owner had moved to Florida, she’d been on the hard for two years, and it was for sale. Gotta admit, my heart almost quit. Dan stripped off the shrink wrap, and there she was. Dark blue hull, all white topsides, and goofball plaid interior. I can’t prove it, but I’m reasonably sure it’s my old Defender with a new name.

I had her surveyed. Wasn’t the greatest result, but Dan, and the Craftworks Marine crew figured we could muddle through. Bottom line, I’m now the proud (somewhat intimidated) owner of the boat. She’s been renamed Defender. That first winter we replaced a lot of hull planking, and straightened up most of the mechanical issues. 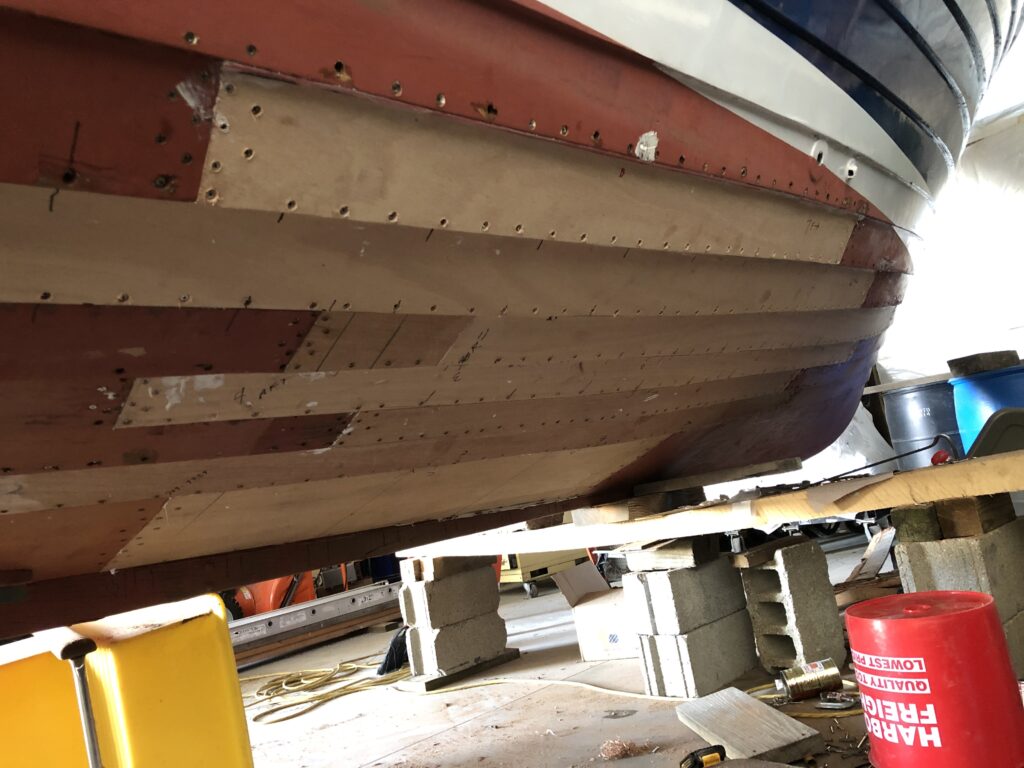 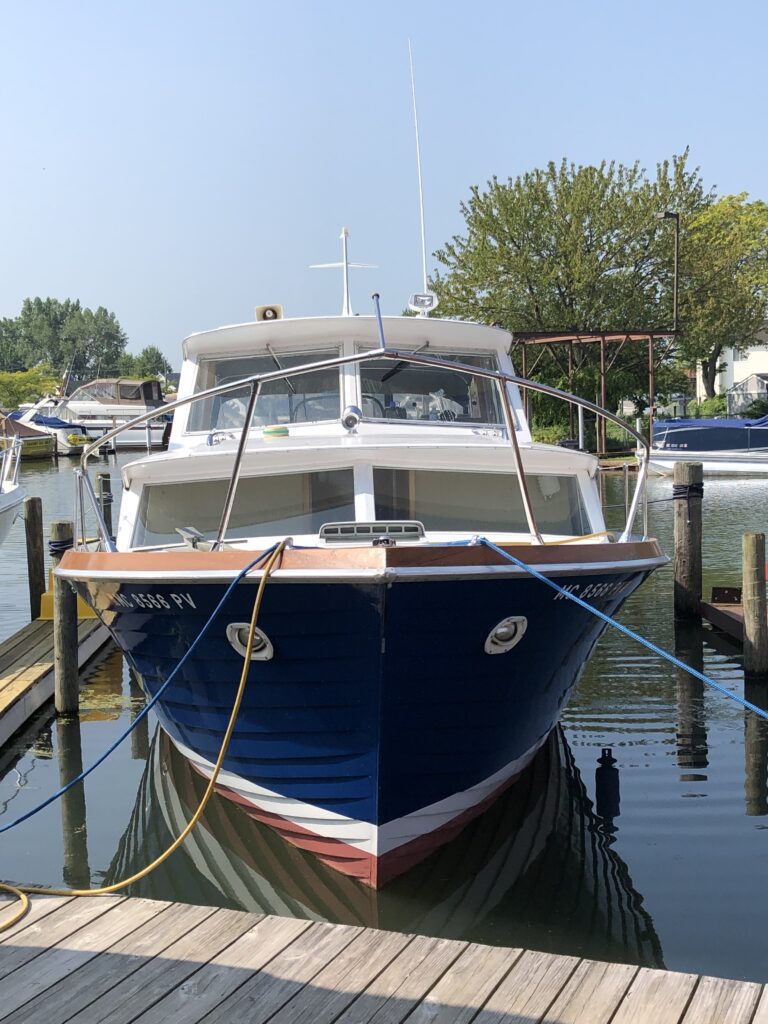 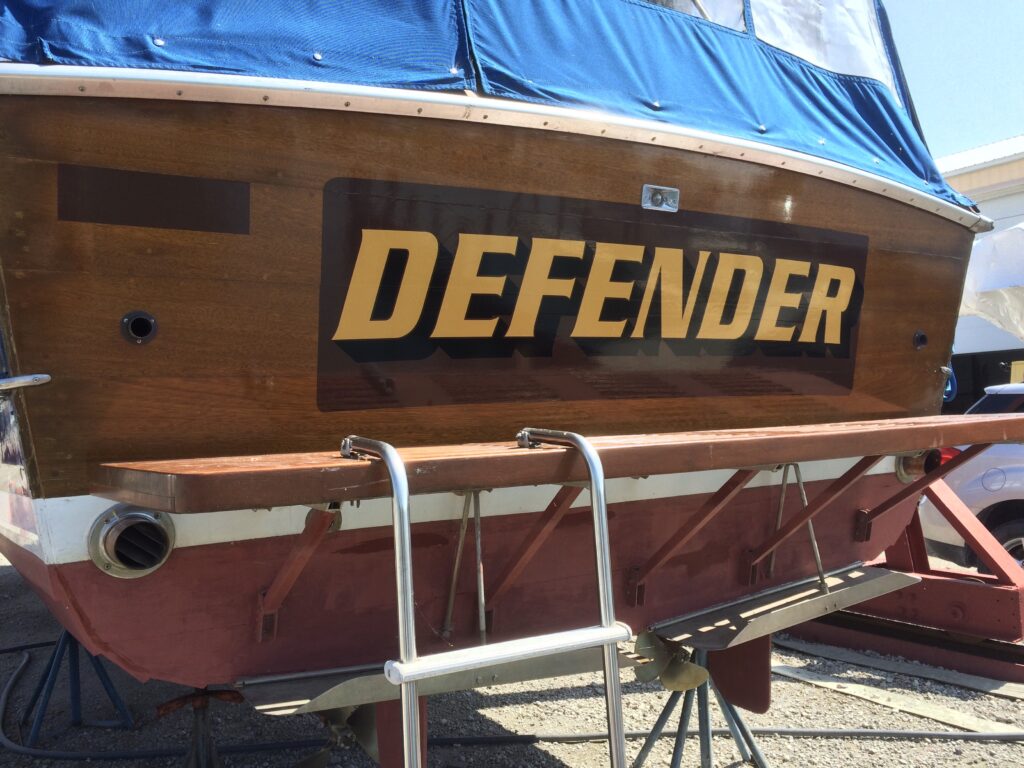 2021 will be my 3rd year on the water with her, supporting DRYA GPSC and now Lake Shore Sail Club events. She sounds and feels like the earlier Defender. She’s not a restoration, just a delightful work in progress.

If any of our readers have any additional information about Dr. Tappert or his boat, I’d love to hear from you.