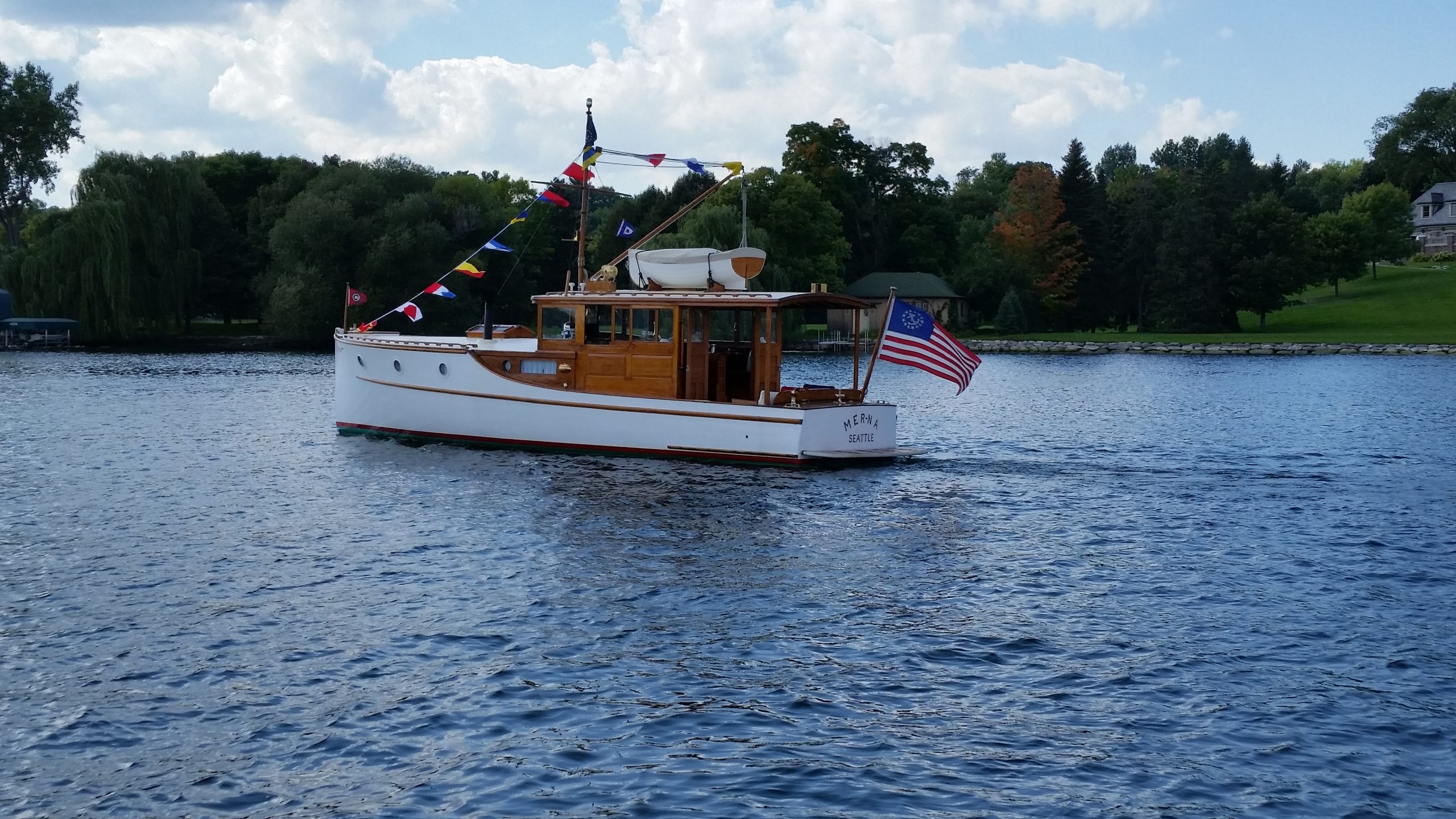 For more than six decades, the N.J. Blanchard Boat Company produced some of the finest yachts, sailboats, and motor boats in the Pacific Northwest. Blanchard had built his business on manufacturing large custom motor yachts and stylish sailing vessels. It wasn’t until the early 1920’s that he decided to mass produce a standardized cruiser. He joined with designer Leigh Coolidge to create his own perfectly proportioned 36′ “Dreamboat”. The first of these standardized vessels hit the water in 1924.

The Blanchard Dreamboats were built using western red cedar planking over white oak framing. Their keels were constructed from Douglas fir, and the hulls were fastened with iron boat nails. The interior, pilothouse and other bright areas were made from teak. He was able to build 25 stock cruisers before the Great Depression began, and this is where the story of MER-NA begins.

MER-NA was the last of the Blanchard Dreamboats to be built. Her keel was laid just as the Depression hit. She was sold at the first ever Seattle Boat Show to Mervin and Naomi Troyer (“MER-NA”), who had just been married. Unfortunately, they never took title to the vessel, as they had been divorced by the time the boat was completed. The Blanchard was hailed as “the outstanding exhibit at the show” by Pacific Motor Boat magazine. MER-NA came equipped with everything they’d need to hit the water: a nine foot lapstrake dinghy, a set of dishes, drinking glasses, silverware, a compass, horn, docking lines and other necessities and sold complete, for $5,500!

Of the very few Dreamboats that still exist, MER-NA is certainly the most original and most celebrated. She still carries her original nine foot dinghy, as well as her authentic crystal light fixtures, cast iron stove, brass faucets, bronze deck hardware, and (original design) burgundy mohair upholstery. She has won many awards over her life, including “Best Preserved/Most Original Boat” at the 2004 ACBS Lake Minnetonka Rendezvous. MER-NA, is a ninety+ year old boat that benefits from vigilant owners committed to keeping her shipshape.

We are making sure that MER-NA receives the care and attention she deserves. We bought MER-NA in 2002 and relocated her from the Pacific Northwest to Lake Minnetonka in the heart of Minnesota. Minnetonka is a 14,000 acre residential lake just 20 miles west of downtown Minneapolis.

MER-NA’s enclosed wheelhouse offers us an extended boating season in the chilly Minnesota spring and fall. As it has worked out, my wife and I can often be found cruising with their friends well into November, sipping beverages in shirtsleeves while a hot meal cooks on the stove.