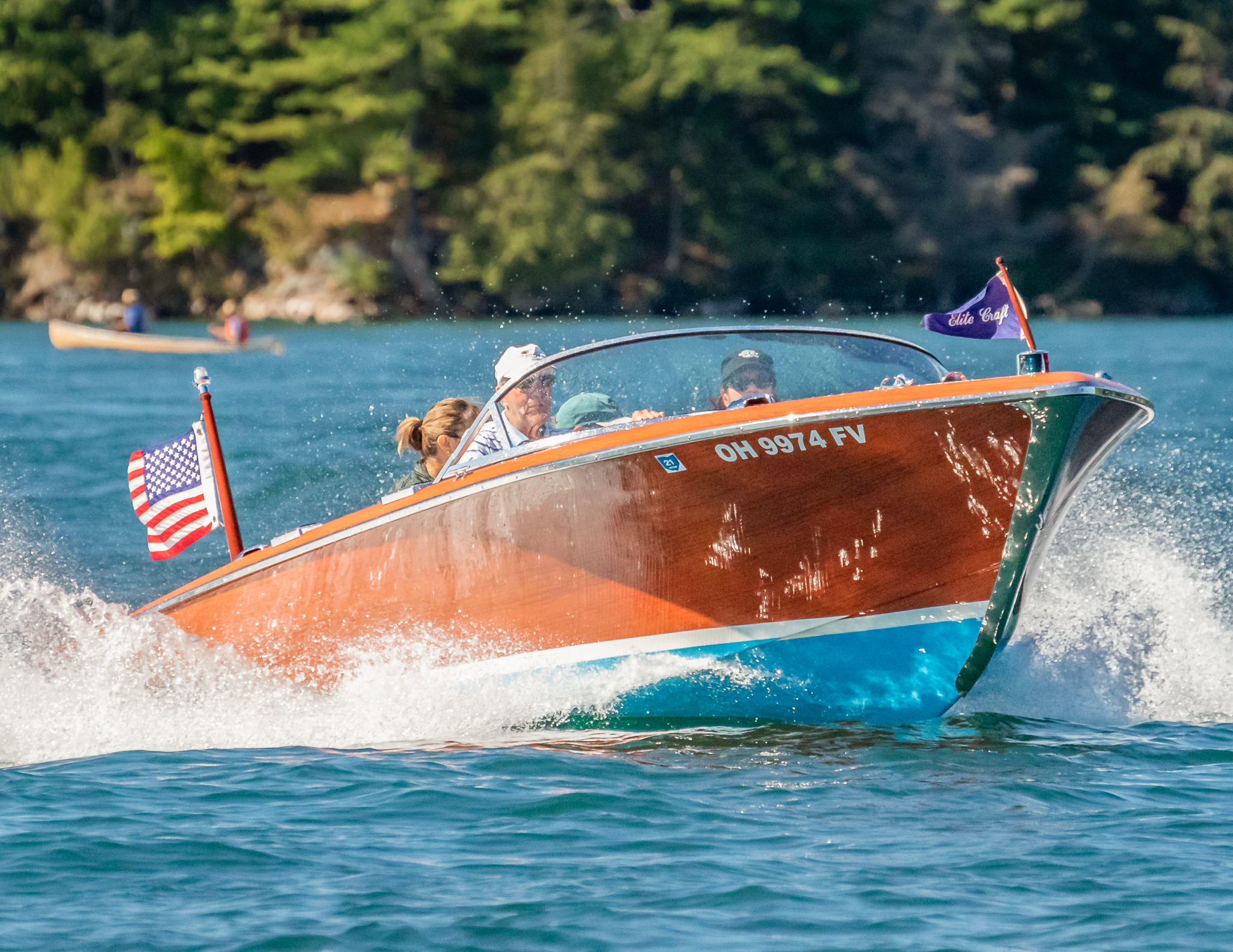 The week before the Huron Annual meeting/show in September of 2018 the 1939 Chris-Craft triple we had owned for 27 years was sold.  We surely enjoyed the many show and events that we participated in with Sashay. She was certainly a beautiful preservation piece. We found ourselves using her less and less fearing potential damage to this original craft. Kim and I made the decision that it was time to do something different.

The plan was to take all winter to look for our next special boat, something we would feel a little more comfortable using and traveling. Had in mind an XK-22 or 19 or similar fiber classic. We’ve always taken time with important decisions. Takes me a year to buy the next vehicle.

So here we are at the Huron show enjoying everyone else’s boat. It was Saturday the last day of the show and planning to leave midafternoon. We were taking the last look around the docks and walked up the hill to the “For Sale” area. There was a boat that just arrived. Looking from below it looked like a Riva Ariston. As I got closer it was an Elite Craft Riviera.  A fiberglass inboard designed to look like a 50’s classic wood runabout. A good friend, Gil Maringer, who was at the show was very familiar with Elite Crafts having restored two of them. He came over and looked it over and talked with the Owner.  Gil’s initial impression was that it was in excellent condition just need some TLC to bring it back to like new condition. Another big plus was that it was a newly designed 1988 model with the deeper V 20’ dual cockpit model with the bigger Ford 351 engine. All of the original documentation was preserved. About 400 Elite Crafts were produced from about 1980 and the early 1990’s.  They have recently restarted production in the Orlando, Florida, area. 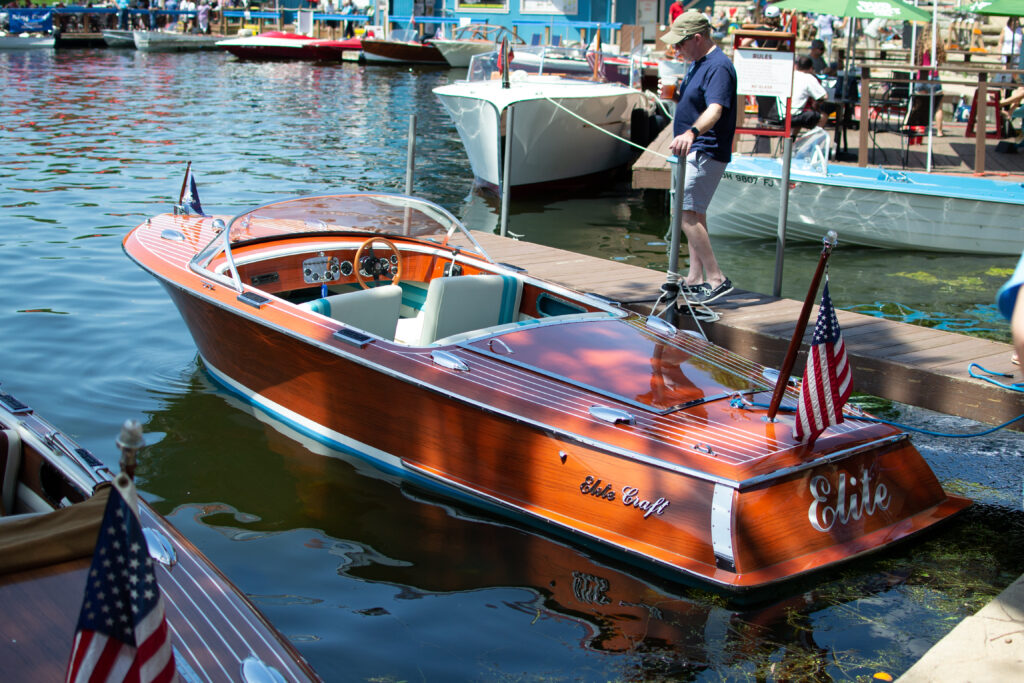 The owner, Don Andrews, said he had just decided to sell. Turning 85 he felt it was time. By now the Elite Craft was getting a lot of attention. I told Don that I was interested and would get back with him. Kim and I were heading out to return home. My wife who is very good at reading my mind said as we were walking away that if you think that is the right one you better leave a deposit.  She said it won’t be for sale very long.

We went back to Don and gave him what was in my wallet and told him I’d come back the next week for a sea trial. Gil and I went back to take a closer look and take her for a ride. An hour later we hooked her up and headed home.

Spent many hours over the winter cleaning, buffing and correcting some mechanical issues. She came out looking like a new boat.  Everything is original, showing no wear or damage. She was shown at Alex Bay annual meeting and received a lot of attention and recognition.

Can’t tell you how many people have asked “how many coats of varnish”. 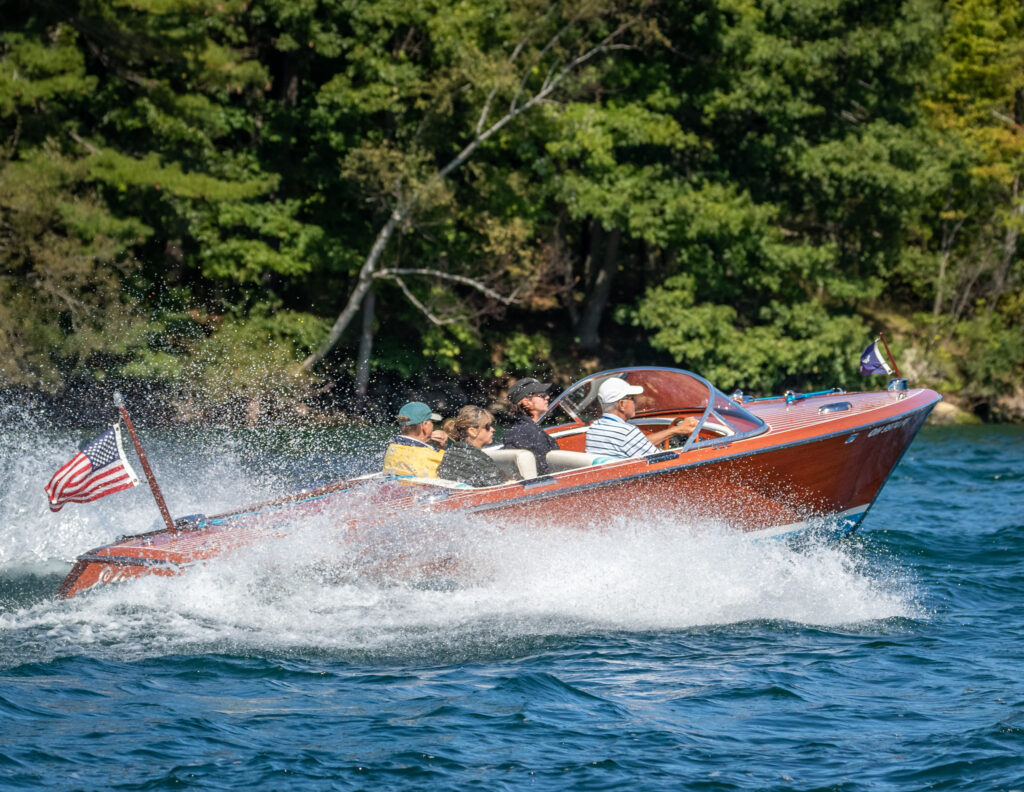