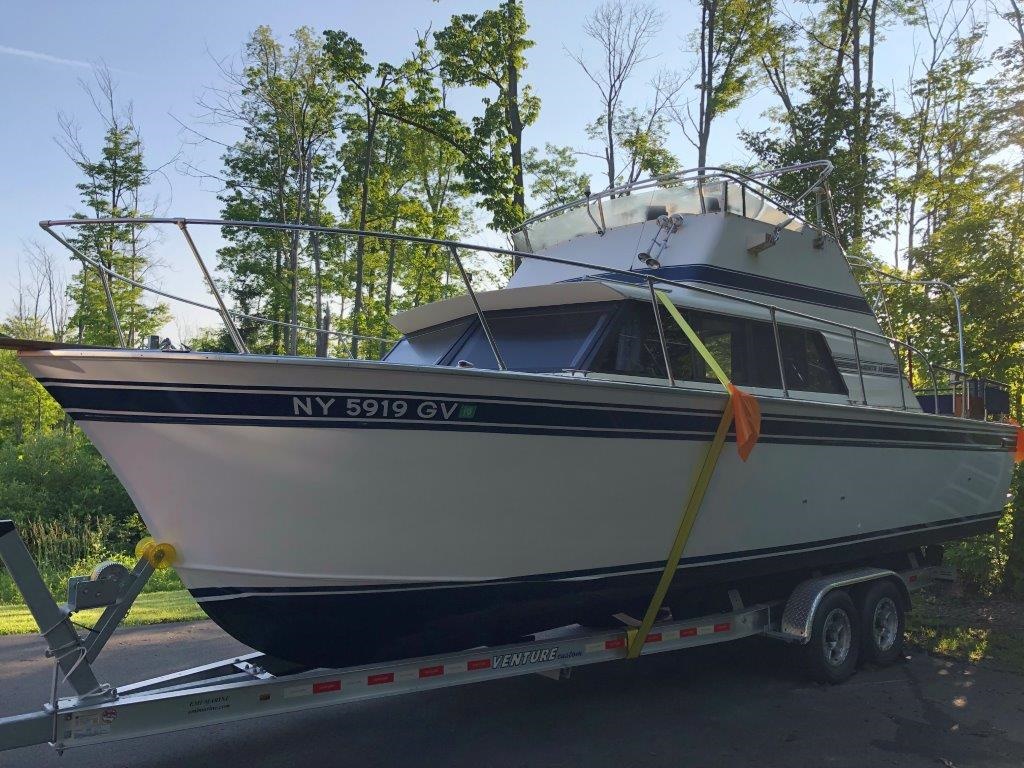 I think it’s fair to say that I got the classic wood boat bug early on. I always envisioned myself restoring a classic wood boat, and I even reconfigured my garage for that prospect. So, I think it’s fair to say that the next step in boating came as a bit of a surprise to my wife and me. Three years ago, when the last of our four children went off the college, we began to conceive of the next chapter in our own lives. Boating was always our common passion, and we resolved that we were going to pursue that prospect.

We quickly learned that boats are plentiful, and we set about the task of determining a price point for our re-entry into the boating world. The boats that caught my eye were out of range for us or otherwise beyond our restoration skill level. In the fall of 2016, my wife and I began to more seriously peruse the internet with the idea of refining our focus. To our mutual surprise, our eyes kept turning to smaller cabin cruisers. The minimum requirements: A large aft deck for her, and a flybridge for me. Among the contenders was a 1989 28’ Marinette Sport Fisherman located in Colton’s Point, Maryland. It was advertised by its second owner to be well maintained and complete with many extras and documentation of all recent maintenance – not a “classic” by any standard, but sturdy and functional. The seller was motivated, and the price was beyond reasonable. We resolved to contact the seller.

The very next day, the advertisement had disappeared. We’d waited one day too long! Disappointed, we started looking elsewhere, and then, without warning, it happened… while sifting through a volume of classified boat ads, I came across the same boat – this time, on eBay. We concluded that the motivated owner had had enough. He donated the boat to a charitable organization that consigned it for auction. Who buys a boat that he’s never seen? Just me.

Our celebration was short. A follow up email confirmed that we had exactly seven days to remove the purchase from its location on the Chesapeake and transport it nearly 400 miles to Chautauqua Lake. No trailer? Check! Extra wide load? Check! Enter Frank from Sterling Boat Transport – diligent, responsive, equipped, and highly recommended. The only “hitch” (pun intended) – make sure the boat is in a place where he can get to it. Roadtrip!

We arrived at the marina in Colton’s Point at daybreak the following Saturday morning and found our boat nose first in a pile of weeds looking nothing at all like the internet photos, complete with freshly laid eggs in a large nest on the helm next to the throttles. The canvases were thick and heavy with rain water, the cabin was open and the late 80’s style mauve interior was thick with dust and other unmentionables. My wife put on a good face, but it was difficult for her to hide her disappointment. I encouraged her to look past the cosmetics and focus on the lines – she has “good bones.”

A few minutes before 7 am, the marina owner arrived, and I seized the opportunity to introduce myself and explain my presence. We hit it off reasonably well. In the course of the conversation, I asked if he could make sure that my transporter had access to the boat the following Monday. “Should be no imposition to you,” I said. “He has a hydraulic trailer – he’ll scoop it up and be on his way.” He stared at me as though he was sizing me up. “Oh no…” he said. “Didn’t they tell you that you’ll need to pay me to crane it onto his trailer?” I paused a moment and wondered who “they” might be. I then explained to him that I bought the boat at an internet auction, and the terms of sale only required that I retrieve it within seven days. “Oh, that’s too bad,” he said. “No way your guy will ever get that boat with the other boats around it.” That day, I learned the term “captive customer” all too well.

Our boat arrived in a western New York snow storm a few days later. Thus began a two year journey during which we’ve completely refurbished the cabin and replaced nearly every part Chrysler ever made for the short block 318. This spring brought fresh hull paint and a new color scheme. I’m happy to report that we no longer have to designate at each launch time which engine to ride – they now both work, and we’re having more fun than we ever imagined!