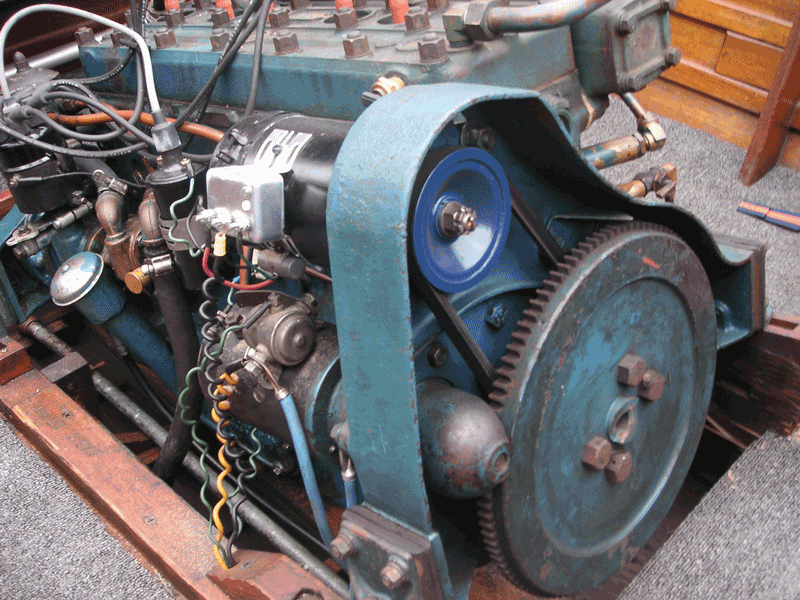 Note: This is the third of several articles on marine engines written by Bill Hancock, a member of ACBS and the Sunnyland Chapter since 2007.

The simple and often-overlooked fuse is a device meant to protect the circuit from an electrical overload. It is unique in that it is one of the few parts that are intentionally designed to fail. By failing, it stops the current flow and thereby protects the electrical circuit from an overload. When a circuit is overloaded it heats up, and depending on the nature of the failure, it may simply continue to work at an elevated temperature or, if the load increases, may abruptly turn the wire in the circuit into a red hot fire starter.

The fuse and its cousin, the circuit breaker are small seemingly innocuous devices which have saved many unsuspecting participants and their precious creations from electrical or incendiary disaster. Think of the Circuit breaker as essentially a sophisticated reusable switch/fuse combination which automatically disconnects when it senses an overload. After an overload the circuit breaker can simply be switched back or reset to the closed position to restore current flow, while the fuse is a one-time device which must be replaced with a new one. To better understand the fuse and its mission, first we should review a little electrical theory. Your electrical system is made up of many circuits. A circuit is literally a closed loop. Electrical current, flows around this loop. Current comes from the battery, and flows usually through a switch to the device, be it a light or motor or something else. Current then flows through the device and from there, back to the battery through a ground wire. This completes the circuit. When all of the components and the connections in the circuit are fresh and working properly, everything is fine. Once age, corrosion, and extended usage or misuse occur however, things begin to go wrong. The systems in our boats are DC or direct current, either 6 or twelve volts. Think of voltage as the pressure that is pushing the current through the circuit.

When things go wrong in a circuit, resistance increases until something happens to finally break the circuit. A fuse/breaker is designed to intentionally fail when the current draw exceeds its rated value, thus protecting the circuit. Without the fuse, the wiring would melt and might eventually break, however it would probably only be after a fire had started in some remote area, unseen and not detected until it was too late. The Fire Marshall’s report would blame “Faulty Wiring” as the cause of the fire, which, while technically correct, would not indicate the root cause of the fire.

So what causes an overload? It can be something as simple as corroded connections. If a connection is corroded, the current has more difficulty passing through, and hence, builds up more heat. A string of bad connections in a circuit continue to raise the resistance until several years later, after much neglect, the current draw in the circuit reaches a critical point. At this point, you want the fuse to fail, or the breaker to trip which protects the circuit from overload. Another mode of failure is overloading of the device such as a motor. Let’s suppose that your bilge pump ingests some debris which jams the pump. Immediately the current draw jumps up, trying to force the pump to run, but it is jammed. At that point three things can happen. The pump motor can fail causing an open circuit and stop the overheating or the pump can simply stay jammed, causing the wire to overheat and start a fire, or the fuse can blow.

When the fuse blows, the current flow stops immediately. So now you have to figure out why the fuse blew or the breaker tripped. Before inserting a new fuse, examine the entire circuit. Look for poor or corroded connections, look at the components. Examine the motor or look at the light bulb. Sometimes it helps to take a test light and probe around the circuit and see if you can spot the problem. Sometimes you can simply replace the fuse or reset the breaker and the problem will go away, but in most cases the resulting euphoria is only temporary.

Typically there is a problem somewhere, and in 99% of the cases it will not resolve itself. You have to find it.

Start by isolating the circuit. Check the resistance of the circuit using a Ohm meter.

This is a multifunction meter which can measure the voltage, current, or the resistance in a circuit. These are available for a nominal price or even free occasionally (Harbor Freight), and should be part of every boater’s tool kit. With this meter, you can keep tabs on your voltage as well as checking the DC current flow.

Before we start checking our circuit let’s review a bit of electrical theory. Ohm’s law states that Voltage is the product of current times resistance or V= I x R where V=Voltage, I = current, and R = resistance.

When a circuit is complete, or essentially a closed loop before and after the battery, it is said to have continuity. We can measure and quantify this continuity by a few simple tests. First, a simple electrical probe or test light will light up throughout the circuit when one end is hooked to ground and the other pointed end touches the various parts of the circuit which have 12 Volts. If we hook our ohm meter to a circuit at both ends, we can measure not only the continuity but also the resistance. If continuity exists and the resistance is low, the circuit is said to be good. However, if greater load is applied, the circuit may “Open” at which point it will not pass current.

As an exercise, and before you need to diagnose something, get a DVOM and practice on a simple circuit so you can understand the principles and become familiar with the tools.

Soldered joint-Clean first, Twist together, then solder. Cover with tape or shrink tubing

In order to protect your various circuits, plan your electrical system by making a diagram. As part of that diagram, include a fuse block or panel which will hold a number of fuses necessary to protect the various individual circuits.

A little bit of forethought here goes a long way. For example, it would seem logical to put all of the bilge pumps on the same circuit and label it “Bilge Pumps”. However, if one bilge pump failed and blew the fuse for whatever reason, both pumps would be disabled. It would be better to have each bilge pump on its own dedicated circuit. The same reasoning would apply to the fuel pump. Putting it on a circuit with the bow light might be convenient, however, if the bow light became non-functional you wouldn’t want it to disable the fuel pump. You can get home without a bow light, but not without a fuel pump. It only takes a few extra wires to do a really nice wiring job. The manufacturers all tend to group many things on a circuit to save time and money, and while it is safe, it is not always prudent. Compare automobiles to aircraft and you will see a lot of safety and what is called redundancy in the electrical system. Triple-A does not service the sky.

So clean your connections, maintain your devices, always have a fresh fully charged battery, and last but not least ALWAYS carry spare fuses.