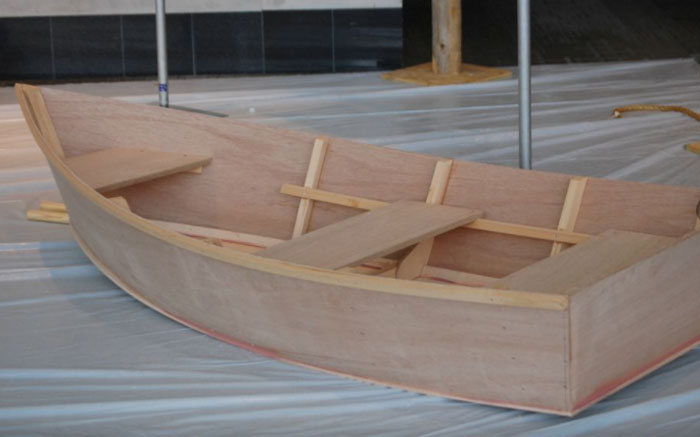 How many times have you received a thumbs-up while trailering your boat?

What stories have you listened to about “my uncle’s boat” while fueling-up at the gas station or marina?

Which families have said they wish they could have a unique boat like yours?

Every time you’re out there – it’s a show!

As far as those families, you, as a mentor, can make their dream come true.  And chapters around the organization are mentoring families in many ways.  Those programs range from building new wooden boats, restoring donated boats, hands-on tool training, and event participation roles.  Here are a few examples:

Ed Fairchild, President of Water Wonderland, described the program this way, “People sign for our Youth Boat Building program at both the Grand Rapids consumer boat show and our Boats on The Boardwalk show in Traverse City, the year prior to building the boat. In years past we have had about 35 families sign up. This year we had over 50 at Grand Rapids alone. We narrow it down to 6.

There is no cost of material to the family. Wooden Runabout Company cnc cuts the material. With chapter volunteers we assemble the boats at the Grand Rapids Show. The family takes the boat home to finish it any way they want. Then in August they display their completed boat at Boats On The Boardwalk where the kids receive an award.  The Water Wonderland Foundation accepts donations to help cover the cost of materials. This year their donations exceeded our goal.”    (photos from Water Wonderland Chapter website and Chapter Facebook page) 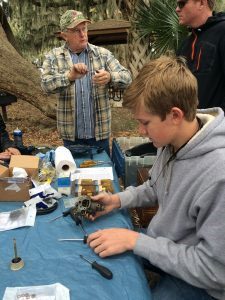 SCAMPY, was established in 2009 to introduce youth to boating and boating safety. It allows students to learn boat building skills while they are mentored in the use of hand and power tools. Sunnyland supplies all materials and equipment at no cost, except for the engines, some of which are provided through a partnership with the Florida Antique Outboard Motor Club.

First time builders can choose between two plans. The first is an eight foot hydroplane powered by a 9.9 HP engine. This 1950”s Popular Mechanics plan is designed to be built in a short period of time and capable of 25 MPH. The second option is the SCAMPY Fisherman, a Glen L design 13 foot boat powered by a 9.9 HP engine. For more accomplished students, the ACE boat, a 12 foot runabout powered by a 25 HP outboard engine and capable of speeds of 25-35 MPH is available.

Both the SCAMPY and AMIkid’s partnership are totally funded by member donations of boats and boating items along with grants from several outside foundations and individuals. (info and photos from Sunnyland website)

Toby Lindo, Blackhawk Chapter member, wrote about The Chicago Maritime Arts Center which was inspired in part by the experience of the Blackhawk Chapter in teaching kids from member families. Originally, a donated derelict boat became a teaching/learning experience for Mark Svoboda’s sons and their friends.  Once that boat was restored, it was sold, a new boat obtained, and the cycle continued with new friends and families.
In 2017, the Chicago Maritime Arts Center held their first boat-building camp at the Canal Street Yard on the South Branch of the Chicago River with a baker’s dozen of kids from all parts of the city. They built two Bevin’s skiffs (12’ wooden rowboats) and launched them on August 30.   Read more about fun youth projects in the Blackhawk Chapter publication Smoke Signal.

What other ways does your chapter involve families and friends?

Email to [email protected]
OR Click here to submit pictures or news from your chapter events.