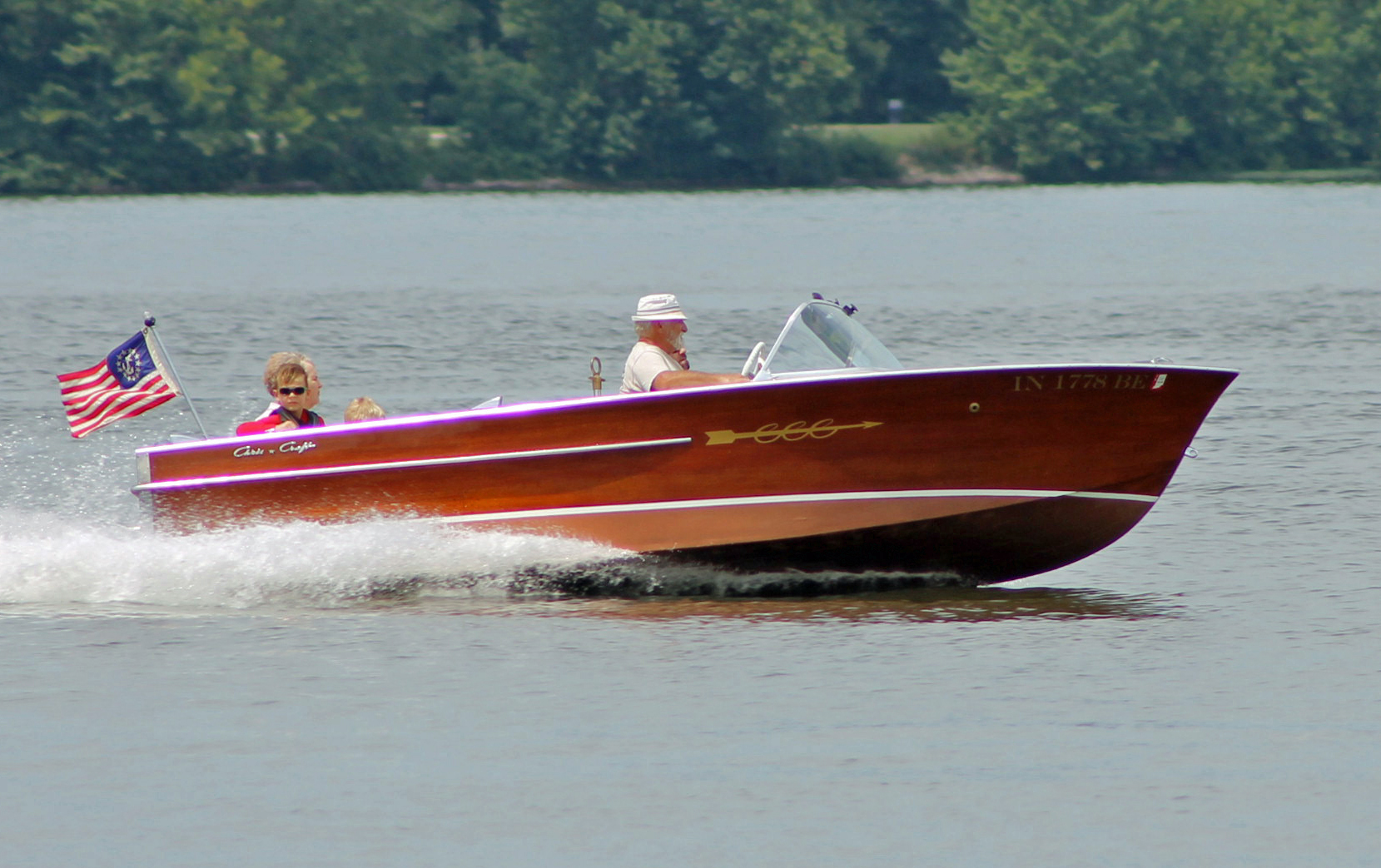 by Dennis & Donna Friesel members of the Indiana chapter

Between 1990 and 1996, I restored a very broken 19’1953 Chris-Craft Racing Runabout that my wife named Mahogamous Affair. This was my first effort at restoring an antique boat and we still use it today. By this time my wife and I were confirmed boaters so we bought a house on a small lake in Indiana. I wanted to restore another wooden boat, so I purchased an all original 1962 Chris-Craft Ski boat from brother in law. The hull was intact and solidly screwed together, but the Vinyl and mahogany deck and upholstery were totally trashed. The bottom planks were sound and very tight, so we sanded and coated them with Smiths Penetrating Epoxy, primed and painted them. I redid the upper deck with new original style vinyl and replaced the stern mahogany deck piece. The bilge was cleaned, coated with Smiths penetrating epoxy and painted. All mahogany sides, transom, and inner frames had no cracks or loose planks so they were sanded lightly, coated with Smiths and re-varnished. Finally, newly upholstered seats and a motor box were obtained from a terminally damaged CC Ski Boat. The boat turned out looking great.

My son Mike used the boat for awhile but the 283 had a lot of blow-by and oil leaks. Fortunately I had rebuilt a Chevy small block 400 motor sitting in my garage that was modified for marine use with Chris-Craft 283 cooling and mounting hardware. It looked like a 283 but was rated at 350 hp. So one Saturday in 2000, my son and I swapped out the 283 for the 400 explaining that it was just a loaner until I could rebuild the 283. He took the boat for a test ride that afternoon and as he came back to the dock he declared “If you take that motor out of this boat, you will lose your grandfather privileges”. It’s still in the Ski boat today and I got to see my grandsons and teach them how to drive and dock the boat. Hence the boat name Family Affair.

Mike never used the boat much due to work and family responsibilities, so I got it back in 2011 and my wife decided it was now her boat. So every year since, we have used and upgraded the Ski Boat in some way, Cedar Flooring, original Chris Craft Ski Pole in 2011. Rebuilt steering wheel, new 13×13 Nibral prop in 2012. Refinished bilge, sides, and repaint bottom with Hard Racing Copper Bronze in 2013. New TACH cable, added a mahogany swim platform, electronic Ignition, rev limiter in 2014. Added rear deck grab bar and custom made Biminis top in 2015. added depth finder in 2016. High temperature exhausts hoses in 2017. Rebuilt and repainted trailer in 2019.

Family Affair has been on the lift at our lake house every summer and is our daily user ski and cruise boat. We have also done several long ACBS sponsored cruises with her (St. John’s, Bayou Tech, and Ohio River). The boat is a familiar presence on our lake and attracts many admirers when we use her. She is truly part of the family and a very exciting boat to run on our lake.