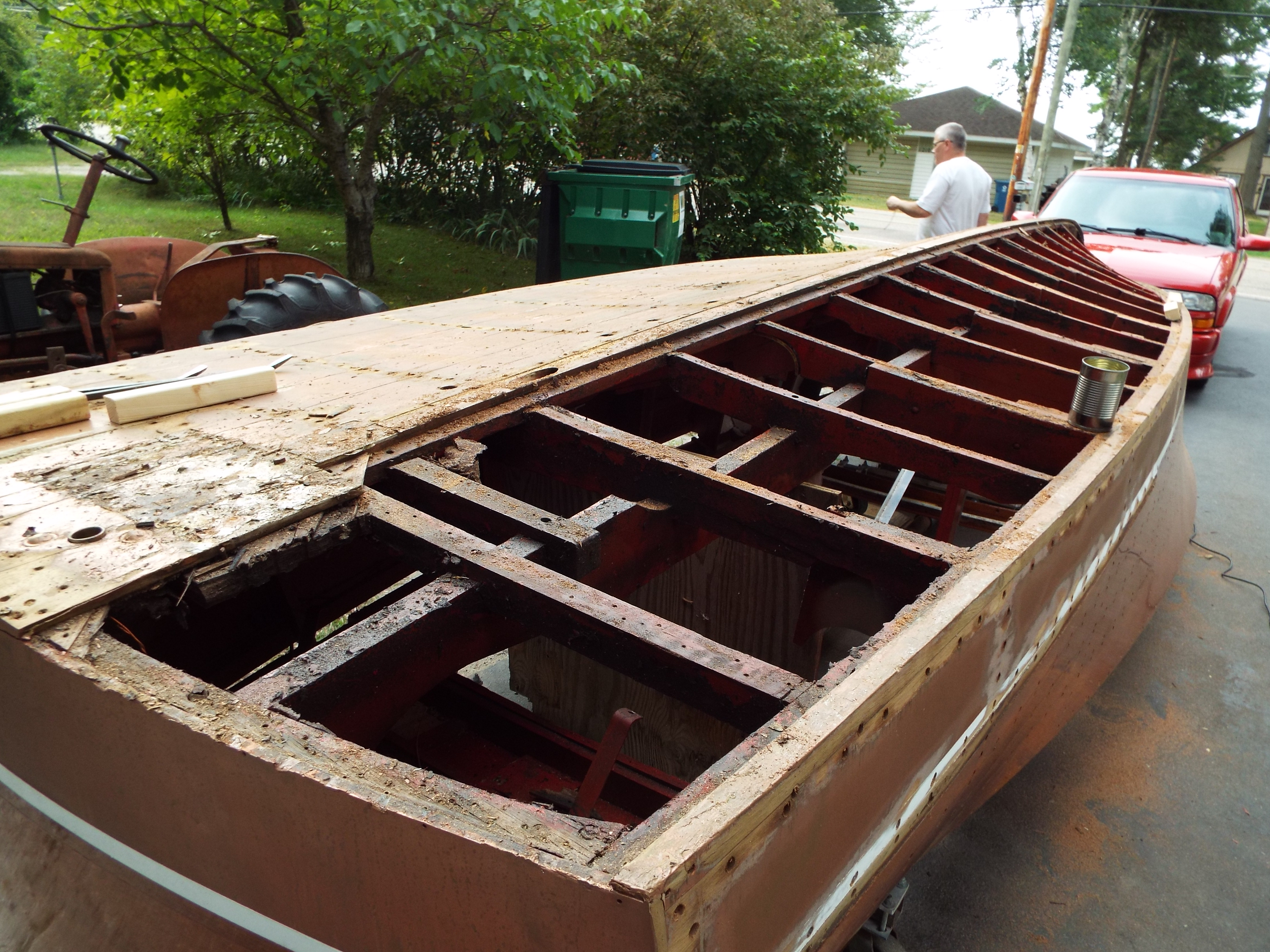 My son Scott and I have been building, restoring, repairing and refinishing boats for the past 40 years. I started building when I was 11 years old with my friend Jon Staudacher and his father Les Staudacher. Les built unlimited hydroplanes from the 1950s to the early 1970s. He built unlimited boats for Guy Lombardo, Bernie Little, Bill Harrah and many other famous people of that era. Growing up Jon and I had the opportunity to meet many of these people. Les also tried to set the world water speed record on Hubbard Lake in northern Michigan in 1963. He designed and built a 30′ boat made of aluminum and powered with a J35 Westinghouse jet engine. The boat names Stars and Stripes was owned by Bob Evans, owner of Evans Bicycles. The boat attained speeds of 267mph.

When we were growing up Jon and I were allowed to have whatever we wanted as long as we built whatever it was we wanted. Les would supply the materials for our projects and we would build them. We made every mistake know to man, but we always completed what we started. When the project was complete, we would give the project back to Les and he would give it to someone that had an interest in it but could not afford it. The we moved onto the next project. The is how I learned to do what we do today. In the end, we built 152 limited hydroplanes all made of wood and six mahogany runabouts.

I was also fortunate enough to learn the custom cabinet building trade from my father-in-law, Walter Hermann. He was a German master cabinet maker that came to this Country in 1952 with his wife and two children. He started a cabinet business in the basement of a condemned house. The cabinets were built on cement blocks because the basement walls leaked and he had to keep the cabinets out of the water. Initially he did not speak English so he would draw pictures for his customers to show them what he was going to build. His business did well enough that he was able to take his family back to Germany to visit and also to buy a house on Higgins Lake in northern Michigan. I worked with him for 4 years and learned the custom cabinet trade.

My son Scott has been part of Marine Service from the start. He is now better than I am and has a lot more patience. We have built, repaired, restored, and refinished many, many boats made of fiberglass and wood. The last 18 years the projects have been mostly wooden boats. Our company’s website features 24 project profiles with photo history from beginning to end. Also on our company’s website are project profiles for two fiberglass Buehler turbo craft jet boats we have restored.

We are proud to say that customer boats that have gone to shows have won awards. Two boats completed for a customer were a 1947 Chris Craft Deluxe named Water Lily and a 1957 20′ Continental named Tiger Lily have won numerous awards. Two of our recent projects, a 1957 21′ Continental named D-3 and a 1961 Continental with a hardtop and 430cu Lincoln Engine were both shown at the ACBS International Boat Show in Port Huron, Michigan this past September. D-3 won a Silver Award in its class and the 1961 Continental hardtop won a Platinum Award in its class and Best of Show Restored. D-3 was purchased by the present owner’s grandmother in 1957 for his grandfather. Except for a couple of years, it has remained in the same family. The ’61 Continental is owned by a customer from Nevada. He is a collector of Ford automobiles. The ’61 Continental caught his attention because the boats fins resembled a 1957 Ford and the 430cu Lincoln engine along with the interior resembled the 1960s Fords. The customer purchased both the hardtop and a twin without the hardtop from an owner in Iowa. Both boats were pattern boats. All of the gull wing door hardware was missing on the hardtop boat so we had to make it from pictures since we could not find any original pieces. You can see the complete restoration on our company’s website, www.marineservicesunlimited.com. We were told by the Mariner’s Museum that only 11 Continentals were built with the hardtop and Lincoln engine. This boat is now for sale. We will restore the non hardtop Continental after the sale of the hardtop boat. The same owner owns the 1962 Buehler Turbo Craft that is on our company’s website. The Buehler has also won awards including a Golf Ward at the ACBS International Boat Show in Racine, WI (2017) and the Marque Award at the St. Clair Show in Michigan (2014).

Presently in the shop we are restoring a 1939 19′ Chris Craft Barrel back and a 1952 17′ Special Runabout. The owner of the Special Runabout is from Washington State. The boat belonged to her father. The Barrel Back is owned by a family in lower Michigan.