It’s the First Holiday of Summer!

Having a Chris Craft Holiday greet you on this first holiday of the summer seemed appropriate.

John and Millie Bayne, members of the Blue Ridge Chapter, acquired this beautiful 20 ft. Chris Craft Holiday in March of 2012.  That’s when her full restoration began.  Exactly two years later with a rebuilt engine and transmission, new wiring, refurbished steering wheel, new upholstery and 14 coats of varnish Dock Holiday was ready to pose for her portrait.  Over 400 hours of personal labor was invested in her restoration.

I purchased Dock Holiday from a good friend who had it sitting in his garage for several years.  He owned his own business, and eventually realized he didn’t have time to restore the boat after listening to me harp at him to sell me the Chris Craft for several years.  The Holiday had been sitting in storage for about 50 years when I got it.  The fist and second pictures below show the condition of it being delivered.

I did some research on the ACBS website (no kidding) and found Paul Cundiff at Woodies Restoration in Kentucky through some of your links.  I contacted Paul and he supplied me with all of the materials I needed for the hull restoration.  Paul also provided valuable technical advice along the way.  The engine was frozen and number two and five cylinders needed to be re-sleeved along with refurbishing the gauges and steering wheel.  Paul and his folks rebuilt the engine, wiring, and addressed several other minor details like bilge pumps that can drain Lake Michigan in an hour.  The rest, as they say is history.  The Chris Craft is definitely a head turner including Georgia and North Carolina DNR agents always willing to provide me with “free safety inspections” so they can get closer looks at it. 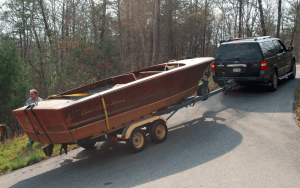 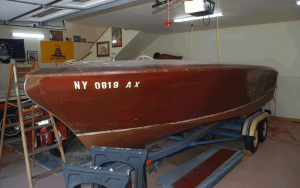 Dock Holiday was the second classic boat in the fleet for John and Millie Bayne,  Here is the story of their other classic boat, Miss B:

We purchased Miss B first in 2010 when my wife Millie saw an ad on Craig’s List for it in North Georgia.  I was totally against buying it but Millie talked me into it.  (Wives can do that, you know.)  We picked it up from the nephew of the original owner who was moving to Missouri, and didn’t have space for the Lyman.  Miss B was my first attempt at restoring a wood boat and since most of it is painted, it went relatively quickly as it was well maintained.  It isn’t a speed boat per se because it has a 1958 Johnson BIG TWIN! 35, but it gets us around the lake.  It draws a crowd whenever we take it out including at gas stations when we stop to fill up the tanks. 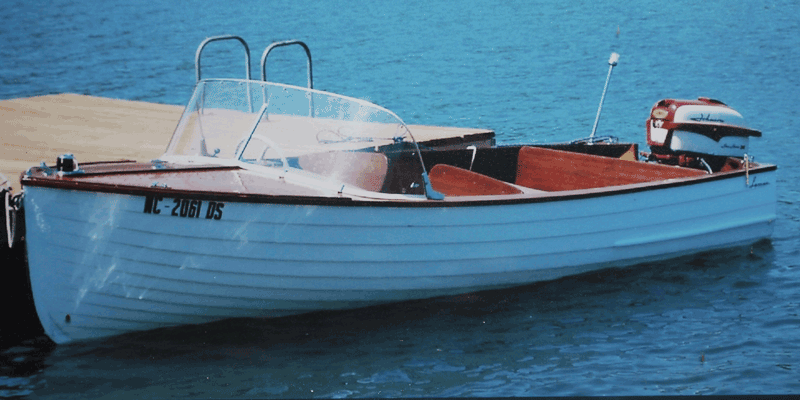 Thank you, John and Millie Bayne, for sharing these stories and pictures.

Be part of sharing what this vintage boat passion is all about.  Email boat stories, event reports, and up to six pictures to [email protected].