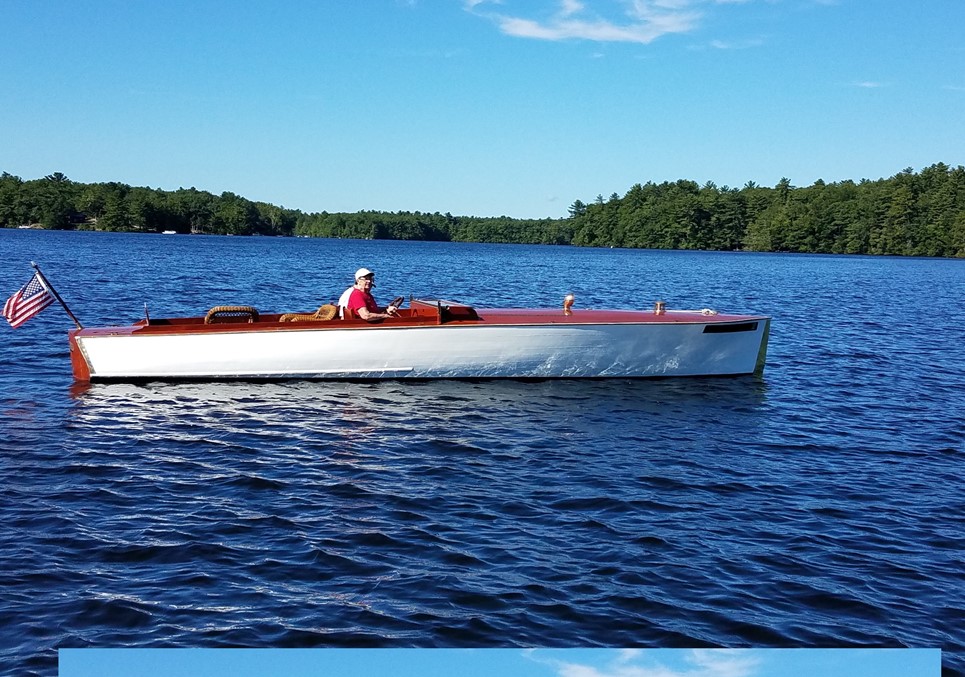 Foreword: It looked and smelled a lot like firewood.

When I was a boy, my brother and I spent a great deal of time on Lake George at my aunt and uncle’s camp there. I will never forget the parade of elegance that began at dusk most every night. Silently, or almost so, when compared to a Chris Craft, a number of old launches would slip out for an evening cruise. One of the boats was a 27-foot Fay & Bowen Long Deck Launch. I was impressed with how it made so little wake, and how its bow majestically sliced through the water. It was such a beautiful boat with superb lines. Later I realized that these old folk’s regattas may have been the first booze cruises.

I prowled around and soon discovered that the only one I could afford was grey wreck. I bought a beauty for $4,500. Experts told me that hull numbers could be found all over the boat, on the keel, or chine, the gas tank mount, under the seats, the engine hatches, etc. These places had all been rebuilt, rotted or crushed. At first no hull number was found. There had been a jack placed between the keel and the ground. Snow load and rot had combined to drive the keel upward past the chine and the chine rail. The remaining wood was a mess. There was a huge hole in the hull. There were places one could see from port to starboard. 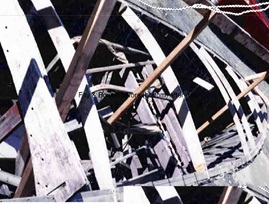 One winter day I went to a chapter work shop in Ticonderoga. There I met two really experienced guys, Bob Melrose and Henry Jordan. Bob was the marketer, and Henry was the blood and sweat. I knew instantly that these were my guys.

Victory Snatched from the Jaws of Defeat

I decided to go ahead with the restoration, without a hull number. On the morning of delivery to Melrose Marine, I chose to clean things up. I found a curved stick with the numbers 696 on it. It looked like it had been a hatch support. There was another identical stick still on the boat, screwed to the inside of the hatch. I unscrewed it and found the letters 696 unweathered!

Henry released the stresses in the hull by cutting all athwart ship pieces added on the original hull. Then Henry and Bob installed 54 steam bent white oak ribs, in place of 108 joined at the keel. These were fastened with 4 or 5 Fasteners per rib in whatever of the remaining wood would accept a screw. After installation of a new rib, Henry would look down the Hull To make sure it was fair. Then 1/4 inch Okume and fore to aft planks bedded in 3M’s 5200. The hull work was finished with the exception of the propeller shaft hole, which I was personally scared to death to attempt. Bob and Henry to the rescue! After this she was installed in my barn where she received a Chrysler Ace engine, 14-foot drive shaft, sole, ceiling, new steering, wiring, hardware, and umteen coats of varnish. 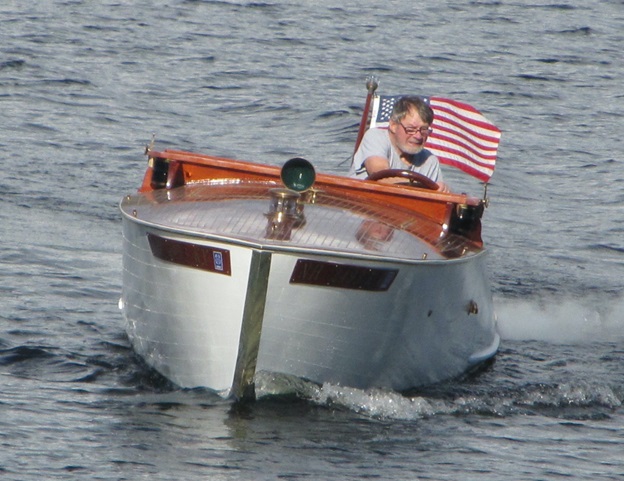