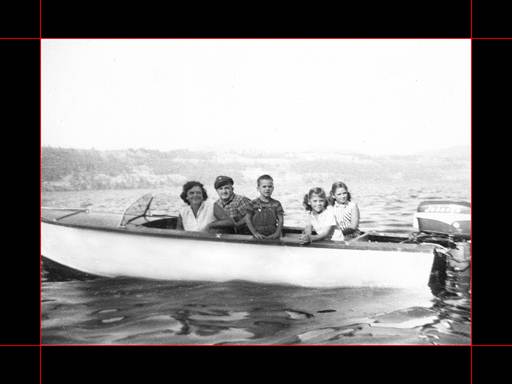 Our love of wooden boats started off by going to area wooden boat shows where we photographed every boat! Little did we know then that we had photos of a boat we would come to own. Growing up, summers were spent at Coeur d’Alene and Kris’ family started off with a “Hollywood” wood panel boat with a Johnson engine (pictured above). But with 3 teenagers, that boat didn’t have the speed needed water skiing, so the first plastic Sea Ray was purchased. In 2004, after the 2nd Sea-Ray boat, and the wooden boat bug had hit us, we were not attracted to a plastic boat!

Lake neighbors visited and talked about the 2004 Sandpoint Boat show they had just returned from and we told them that earlier that day we had decided to begin a search for a wood boat. They mentioned that one of the club members had a tiny “for sale” sign on his boat window at the show. They called around, got the boat owner’s info and we made the call, then took the 2-hour drive to see the boat in Hope Idaho, on Lake Pend Oreille. We were looking at THE barrel back. I was shaking Kris’ hand as we approached the dock in excitement! With no inspection, we trusted what we saw and made an offer. We also knew this was a fairly rare boat in great shape with a new GMC 180 horse engine! And we were given a framed copy of the original drawings of our new boat and recorded history! So, in less than 24 hours after making our decision to purchase a wood boat, we owned one! Exciting and terrifying all at the same time!

“Grand Rouge” was built in 1939 at the Chris-Craft factory and delivered to its first owner in Ames, Iowa. Its history is sketchy after that until it was re-discovered in New York in 1997 in “gray wood” condition and restoration began. Mid-way through restoration, the owner ran out of money, so the boat was purchased by a couple from Colorado, who had a vacation home on Lake Pend Oreille.

We have owned “Grand Rouge” for 15 years! The name “Grand Rouge” came from the previous owner’s wife, who is a gorgeous red head and the name of a French red wine! Called a Racing Runabout or Special Race Boat, it was built for non-racing in a racing style (and it’s pretty “zippy”)! We consider it a floating piece of furniture! One dock ding is a major crisis, which happened when pulling the boat out of a public boat launch and not seeing a nail sticking out of the dock, which punctured a small hole in the side, And just as we were leaving for the 2008 ACBS International show in Coeur d’Alene, so after a quick repair, we were off! Oh, and we won 2nd place for Best Preserved Antique Runabout!